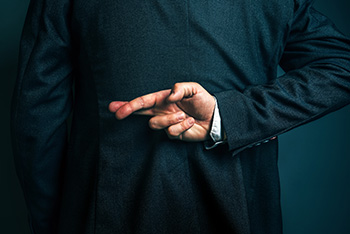 Do Not Lie to One Another

In these late summer days of 1974, while you have been engaged in the study of the language in which the New Testament word of truth was given, we have had some startling revelations of the propensity for lying which seems to be pandemic in our society.

For a long time Americans have seemed to be very tolerant of patent falsehood, coining many new euphemisms for an untruth. Whereas our fathers had the "white lie," we have had the "credibility gap." And we have had it not only on Madison Avenue but on Pennsylvania Avenue. When revealed as untrue, previous statements have simply become "inoperative."

But with the release of the Nixon-Haldeman tape of June 23, 1972, something at last snapped, and even our sinful society was pushed beyond the limits of tolerance. When President Nixon spoke of certain facts being "at variance with certain of my previous statements," it would no longer wash. Senator Goldwater expressed the reaction of so many: "There are only so many lies you can take, and now there has been one too many."

For the first time in years you hear Americans mouthing the old adage that "honesty is the best policy." And now we have a new President who knows he has a sure-fire applause-getter whenever he refers to the virtue of truthfulness.

I suppose one could have felt a certain sympathy for the general manager of the local football club who had the misfortune to be exposed that same weekend as having "papered the house" - the euphemism for giving out free tickets and then releasing false paid attendance figures. I'm sure he was caught completely off guard by the volume of the public outcry; and he could only mumble the pragmatic rationalization he had thought was still accepted in this country: "I don't see who was hurt."

If the children of darkness can be moved to such indignation as we have heard expressed in recent weeks, surely it behooves the children of the kingdom to reexamine their own standards. Living in such a society as we have been living in, our own consciences can easily become desensitized and our own standard of truth can become rather elastic.

We need to remind ourselves that the necessity of absolute truthfulness in us rests upon the fact that our God is true. This is the cardinal principle guiding the Christian's life. We are to be mirrors of God's purity, imitators of his actions, sons of our Father. We are to be perfect as he is perfect; holy as he is holy; and we are to be truthful as he is truthful.

What is especially saddening, it seems to me, is the fact that we sometimes seem to be most careless about the truth when we are discussing our Christian experience or reporting the results of our ministry of the gospel. There is a phrase that used to jar me every time I heard it. Since I don't seem to hear it any more I can only hope it is passing out of the church's vocabulary. The phrase "speaking evangelistically," was usually said with a smile to indicate the speaker was conscious of stretching the truth a bit. How tragic that this should ever have become an accepted connotation of the term "evangelistic"!

Spurgeon says in one of his sermons: "The art of stretching is uncommonly general. Fine imaginations are not at all scarce. Certain people are always on the lookout for wonders; and if they do not see them they invent them. When a man gets into this style of talk, it is no matter what he is hammering at, he speaks of it as the finest, greatest, and most marvelous in the kingdom or else the most awful, horrible, and dreadful in the world."

What we must face is the fact that lying is very natural to the natural man - is second nature to him - and remains very natural to that corruption of nature which, as the Confession puts it, remains with the regenerated during this life.

It is truthfulness that has become unnatural to man. And it can become second nature to him only as he receives a new nature by the supernatural transforming work of God the Holy Spirit making him over in the image of Christ, who is the Truth.

Two points, therefore, we do well to emphasize: 1) We cannot expect that a character of transparent honesty will come easily to us, or without a struggle. And 2) We must be satisfied with nothing less than this - difficult and slow though its achievement may seem to be. We can be satisfied with nothing less than God's standard of absolute truthfulness in thought, word, and deed. We must constantly be on our guard against the almost unthinking deceptions we seem so prone to.

We must give conscious diligence - conscious diligence, not expecting that this will simply come automatically - to fulfilling these divine commandments: "Putting away lying, speak every man truth with his neighbour; for we are members one of another" (Ephesians 4:25). "Lie not one to another, seeing that ye have put off the old man with his deeds; and have put on the new man, which is renewed in knowledge after the image of him that created him" (Colossians 3:9, 10).

Dr. Strimple is Professor Emeritus of Systematic Theology at Westminster Seminary California. This exhortation was given at a chapel for beginning students on campus for their introductory Greek instruction in 1974.