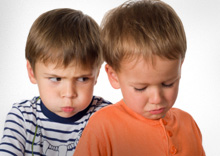 "That offends me!" Who hasn't heard that? Particularly, what pastor, elder, or deacon hasn't heard it? It makes us shudder. How should we respond? It depends on what kind of offense it is! We want unity and harmony in the church. But unless we consider that there are different kinds of offense and that God's ordained servants must make different responses to each, we won't get it.

What is an offense?

What is an "offense" according to God's Word? It's something that trips up someone so that he falls into sin or unbelief. The New Testament uses it as a noun. "Therefore let us stop passing judgment on one another. Instead, make up your mind not to put any stumbling block or obstacle in your brother's way" (Rom. 14:13; cf. Rom. 14:20; 1 Cor. 8:9). It also uses it as a verb. "It is better not to eat meat or drink wine or to do anything else that will cause your brother to fall" (Rom. 14:21; cf. 1 Cor. 8:13).

The verb use is very instructive. When it's active, it means "to cause to stumble or fall." For example, "But if anyone causes one of these little ones who believe in me to sin, it would be better for him to have a large millstone hung around his neck and to be drowned in the depths of the sea" (Matt. 18:6).

But when it's passive, it means "to stumble over, to take offense." But in this case, the blame isn't on the "stumbling block." It's on the one who stumbles. For example, "And they took offense at him" (Matt. 13:57). Literally, "they stumbled over him." Jesus was the stumbling block, but he didn't sin. It was their own fault that they stumbled. They "took offense ... because of their lack of faith" (Matt. 13:58).

This is a very important distinction. In other words, it's a sin to give offense. But it's also a sin to take offense when none is given.

The sin of giving offense

When Paul talks about strong and weak brothers in Romans 14-15 and in 1 Corinthians 8-10, he warns against the sin of giving offense. He commands stronger brothers to take pains not to cause weak brothers to fall into sin. "When you sin against your brothers in this way and wound their weak conscience, you sin against Christ. Therefore, if what I eat causes my brother to fall into sin, I will never eat meat again, so that I will not cause him to fall" (1 Cor. 8:12-13).

The sin of giving offense is one which a strong brother commits by doing something which is ordinarily a legitimate act of Christian freedom. But in certain circumstances it becomes wrong because it influences a weak brother to do something against his conscience. God holds the strong brother responsible for that sin because he failed to show Christ-like love and servanthood when it came to the weakness of his weak brother. He committed the sin of giving offense.

What makes the weak brother weak? First of all, a weak brother is weak in his knowledge of God's Word (1 Cor. 8:4, 7). This makes him weak in faith (Rom. 14:1). "But the man who has doubts is condemned if he eats, because his eating is not from faith; and everything that does not come from faith is sin" (Rom. 14:23). Therefore, he's weak in conscience (1 Cor. 8:7, 10, 12). His conscience is over-sensitive. It condemns him for doing what God's Word permits. Moreover, the weak brother is weak in self-control. "For if anyone with a weak conscience sees you who have this knowledge eating in an idol's temple, won't he be emboldened to eat what has been sacrificed to idols" (1 Cor. 8:10)?

The strong brother is strong because he's been instructed in God's Word. "As one who is in the Lord Jesus, I am fully convinced that no food is unclean in itself" (Rom. 14:14; cf. 1 Cor. 8:4-7). The strong are strong where the weak are weak—in knowledge (1 Cor. 8:7, 10), faith (Rom. 14:22), conscience (Rom. 14:22), and self-control (1 Cor. 10:29-30). Strong brothers are mature believers who exercise biblical Christian freedom with clear consciences and aren't wrongly influenced by others who make different judgment calls.

Unhappily, this doesn't automatically make strong brothers strong in love (1 Cor. 8:1). But they ought to be strong in love. "We who are strong ought to bear with the failings of the weak and not to please ourselves. Each of us should please his neighbor for his good, to build him up" (Rom. 15:1-2). God holds the strong responsible for the weak.

The sin of taking offense

In this light, realize that you have to relate to more than one kind of differing Christian. There are weak brothers. There are also strong brothers who disagree with some of your judgment calls but who follow biblical principles about Christian liberty in such things.

But there's another kind of differing believer. Believe me, you will encounter them. They're the ones who refuse to accept others who make differing judgment calls. Instead, they keep pushing others to conform to their conclusions. They get upset at those who resist. They take offense when no offense is given.

The people of Jesus' hometown "took offense at him." Jesus was a stumbling block, but not in the sense that he committed the sin of giving offense. Rather, he was a stumbling block in the sense that he was the occasion for their sin of taking offense. They probably blamed Jesus. But in reality, the reason they took offense was "their lack of faith" (Matt. 13:57-58). The sin was theirs, not his.

This kind of differing believer is not a weak brother. He's firm in conviction and will-power. He's not about to blindly follow examples with which he disagrees. But he's not a strong brother either. He's weak in Biblical knowledge and he's weak in love. He can't differentiate between God's commands and his own personal application of God's commands. He makes his own applications binding—not just for himself, but for everyone else. He's a legalist, a "Pharisee." He takes offense at those who resist his pressure to conform to his judgment calls. He takes offense when none is given. He takes offense because of his own pride. The sin is his, not theirs.

Where the rubber meets the road

Sometimes pastors, elders, and deacons, deeply concerned not to give offense, let themselves and the church get taken hostage by someone who takes offense. It seems that every time Christ's kingdom is advancing—whether a pastor is being called, a budget is being approved, a church is being planted, a building program is being developed, a Christian school (or a Christian home school support group) is being formed, etc. etc. etc.—someone steps forward to say of something, "That offends me!" Eager to avoid conflict in the church, and failing to realize that taking offense is a sin in itself—a divisive, peace-breaking, conflict-producing sin—God's ordained servants often backpedal in order to appease the offended one.

Now, as those who've been blessed with good teaching, we need to beware of the ease with which we do fall into the sin of giving offense (1 Cor. 8:1). So whenever someone says, "That offends me," we'd better examine ourselves. We need—by abiding in Christ—to bear the fruit of a humble, Christ-like attitude of servant-love toward all our brethren, including our weak brothers. But if it becomes evident that the person saying, "That offends me," is actually guilty of the sin of taking offense, we had better not try to appease it. If we do, we fall into sin ourselves. We sin by failing to deal with divisive judgmentalism in Christ's church. We had better deal with it not as a hurt we need to soothe but as a sin we need to confront.

Jesus never backed off from saying or doing things which were right, even though he knew the Pharisees would take offense at them (cf. Matt. 15:1-14). He kept doing what brought his Father glory and advanced his own Kingdom. At first, when the Pharisees questioned him, Jesus simply explained why he did what he did. But when they started trying to turn people away from following him, Jesus began more directly to rebuke them. He also began to warn others about the Pharisees. He told his disciples to "be on guard" (Matt. 16:6) and to "leave them" (Matt. 15:14). Finally, Jesus openly rebuked the Pharisees.

So, in light of Christ's example, how should God's ordained servants relate to those who take offense when none is given? First and foremost, beware of being an offense-taker yourself (Matt. 6:12, Luke 12:1, Rom. 14:3). (Don't be too quick to exonerate yourself. As Martin Luther incisively said, "There's a pope, a devil, and a Pharisee in every human heart.") If an offense-taker questions you, gently and patiently explain why you believe and behave as you do (2 Tim. 2:24-26). Don't give in to his pressure to conform to his personal dos and don'ts, especially if it impinges on the gospel (see the whole book of Galatians). Keep pursuing peace (Rom 12:18; 14:19). Try to build him up in Christ. If he refuses your efforts to be a peacemaker, back off and commit him to God. Warn the church as a whole of the sin of taking offense (Rom. 15:14). Make sure you keep the grace of God in Christ central in all your ministry. I hope that it goes without saying that you'll love the offense-taker for Christ's sake and pray for him each step of the way. Maybe the Lord will use these things to bring him to greater maturity in Christ.

But what if the offense-taker escalates his efforts to pressure others to conform to his personal criteria of acceptance and fellowship? If the offense-taker starts to hurt the church, to hurt individual believers spiritually, and/or to hurt the church's witness to the world, confront him on the private level. Seek to lead him to repentance (Matt. 18:15; Gal. 6:1). If private confrontation doesn't restore the offending brother, then you must pursue the further steps for church discipline which our Lord Jesus spelled out (Matt. 18:15-20). Public rebuke is what our Lord Jesus did in effect when he publicly condemned those who so persistently opposed him (Matt. 23). The final step of excommunication is what he did in effect when he took the Kingdom away from the Jews and gave it to the Gentiles, culminating in the destruction of the temple in 70 AD (but in hope of restoration, Rom. 11).

It is a sin to give offense. But it's also a sin to be "touchy," to take offense when none is given. It's important that God's ordained servants realize that both of these things are sins and act accordingly.

Now brothers, let's be honest. I've committed both of these kinds of sins—I've both given and taken offense at varying points in my Christian pilgrimage. How thankful I am that I have a faithful Savior who has loved me and received me, whose righteousness covers me, and whose Spirit is sanctifying me. The goal of this article is not to provide fuel for self-righteousness. My goal rather is to help church leaders to consider some weaknesses which Satan seeks to exploit in his war against Christ and the church. My goal is to encourage us in church leadership to recognize these sins as sin and to help God's people to experience the triumph of God's grace in Christ over these sins.

This article was originally published in Ordained Servant, vol. 8, no. 2. The author is indebted to Dr. Garry Friesen for the basic ideas expressed in this article. For a more detailed discussion of this theme, please see his book Decision Making and the Will of God (Multnomah Press, 1980), pp. 377-426.