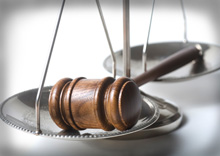 They are everywhere, all around us: desperate people seeking justification. Oh, they don't think of it that way, not at all. In Asia, it is the worshiper at a Buddhist shrine with his joss stick, a square of gilt paper, and a crudely printed prayer, seeking peace. In the streets of Madrid, it is the person in the confessional box, seeking absolution for sins. In American neighborhoods, it is the couple knocking on doors to offer cultic literature, seeking acceptance with God for their efforts. People throughout the world, in a multitude of ways, try to get approval from their god or God.

How does the God of the Bible respond to these various efforts? The God who made us and our world rejects all these futile acts! God provides only one way for a sinner to be right with him: justification by faith alone in Jesus Christ alone.

The Reformers asked the key question: How can a sinful man be accepted by his holy Creator? The Roman Catholic Church and biblically oriented Protestants have answered this question in such different ways that a chasm still divides them. Although the biblical answer to this question, which was rediscovered by the Reformers, is well known in Orthodox Presbyterian churches, it is so vital that we should continually think about it. A sad fact of history is that when justification by faith alone no longer anchors a church, the whole gospel is lost, and the people of God are left without hope.

The Meaning of Justification

But what does the word justify mean? The basic idea is to declare someone all right, acceptable, righteous—not to condemn him, but to pronounce him not guilty. In Luke 18:9-14, for example, Jesus describes two men who were praying in the temple, a Pharisee and a tax collector. Jesus surprises everyone when he says that one man went home "justified before God"—and it wasn't the religious man (verse 14)! Why? The tax collector humbled himself before God, trusting in his grace, while the Pharisee trusted in himself and what he had done for God. We might say that God declared the tax collector accepted or justified on the basis of faith alone.

Here is how the Shorter Catechism describes justification in Question 33: "Justification is an act of God's free grace, wherein he pardoneth all our sins, and accepteth us as righteous in his sight, only for the righteousness of Christ imputed to us, and received by faith alone." Justification is free grace, not conditioned on anything within the sinner or done by him. It is the unmerited favor of a merciful God. Otherwise, the works of the Pharisee would have made him, not the tax collector, acceptable to God.

When God justifies a sinner, he pronounces him not guilty and considers him righteous, as one who does what is right in his sight. God does this by taking the perfect righteousness of Jesus Christ and applying it to the believer (that is, "imputing" it to him, or charging it to his account). It was not the tax collector's own obedience that merited either the pardoning of his sins or God's considering him righteous. It was the work of another, and in the Cross we learn that that other person is Jesus Christ.

Jesus Christ's obedient life and sacrificial death make justification objective—something outside of myself, something done for me, done in history, and accepted by God. This means that, like the tax collector, all I can do is acknowledge my sins: "God, have mercy on me, a sinner." I have to forsake my own righteousness by repenting, no longer trying to see myself as good or as capable of pleasing God on my own. Justification by faith repudiates my own efforts and looks only to the work of Jesus Christ to bring pardon for my sin and a righteousness that is acceptable to God.

Tragically, the Roman Catholic Church at the Council of Trent (1545-63) anathematized or condemned the biblical teaching of justification by faith alone. That single word alone, which the Shorter Catechism highlights, continues to separate Catholicism from biblical Christianity. It means that no human works of any kind can play a part in the sinner's justification before God.

And when we are justified by faith alone, that does not mean that we trust in our faith, either. That is the error of the Arminians. Genuine faith isn't meritorious. Rather, it is the instrument or means by which we, as sinners, are joined to Christ. Christ alone makes us acceptable. We might say that faith is the empty cup into which the merit and works of Jesus Christ are poured. Christ, not our faith, is the drink that satisfies our souls. Faith is the God-ordained means by which the benefits of Christ are made ours.

Faith has been compared to a boat hook, which draws the boat to the dock. By itself, the boat hook, in the middle of the river, has no power. But the sailor uses it to draw his craft to the safety of the dock. Faith in Jesus Christ, God is pleased to declare, draws us to the Savior. Just having faith doesn't make us acceptable, for people have faith in many things. The object of our faith must be Jesus Christ, for he alone makes us acceptable before God. We look not at the strength of our faith, but at the strength of our Savior. As Joel Beeke puts it, "God is pleased with faith [alone] because faith is pleased with Christ [alone]," for God himself is the giver of the faith he accepts (Eph. 2:8-9).

When a sinner acknowledges that his own righteousness will not do, he receives from God the perfect righteousness of Jesus Christ, counted as being his own, so that God might justify the ungodly (Rom. 3:26; 4:5). God accepts the work of his Son in place of my work, and justification comes to me as I am emptied of self-trust and rest on Jesus Christ alone to save me.

This is the way the Shorter Catechism puts it so beautifully in Question 86: "Faith in Jesus Christ is a saving grace, whereby we receive and rest upon him alone for salvation, as he is offered to us in the gospel." The justified person, having received by sovereign grace the instrument of faith in Christ as Lord, then rests upon him as his only hope. God declares the sinner accepted and announces to all of heaven that this one is his own dear child (Shorter Catechism, Q. 34). When God changes the status of a person from condemned to justified, he also changes the nature of that person in the work of sanctification (Shorter Catechism, Q. 35).

You can see how vital an understanding of justification is to living as a Christian, and how a church that is confused about justification will be confused all the way through.

Christ, Our Only Hope

Are we indeed convinced that Jesus Christ is our only hope? There is a danger that because Christians are "nice" people, we might trust in our niceness, not in Christ. Being polite does not save, nor does an attitude of self-sacrifice, or even faithfulness in our duties. Christ is the One who saves us. It is not exemplary people, who can point to their proper behavior and good works, whom God receives. It is sinners who know that their own works are nothing but shreds and rags (Isa. 64:6).

God will not make an exception to his plan of salvation because we have tried so hard. No flesh, the apostle said, will be justified by human effort. Rather, the reverse is true: everyone who looks to Jesus Christ alone will be justified. Justification by faith alone through Christ alone anchors the church and every member solidly in the work of Christ. It is the message that we must remember and that our world needs to hear.

The author is the pastor of Covenant OPC in Barre, Vt. Reprinted from New Horizons, February 2001.