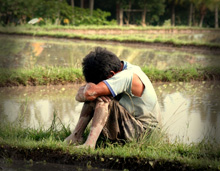 The monstrous Cyclone Nargis of May 5, 2008 brought Myanmar to our attention. The disastrous aftermath brought the tragic needs of her people to our hearts. Corpses of the dead number tens of thousands and thousands more are injured. Twenty one villages were overwhelmed with water. Eyewitness Mr. Warring writes: "On a per-country basis, damage and life-losses in Myanmar may well exceed that of the multi-country tsunami tragedy of December 2004. Total fatalities then were 230,000; here, the UN also calculates 100,000 plus for just this one country.... In Ayeyarwaddy Delta southwest of Yanggon (the nation's 'rice bowl') ... simple bamboo shanties in the tens of thousands were swept away. Along with them uncounted lives of men, women and children.... Equally tragic are the estimated tens of thousands of persons young and old isolated on islands newly created by the cyclone aftermath's steeply rising waters. They are dying of thirst, starvation—and perhaps too soon, cataclysmic disease—with no one to help them." Because of the many dead, thousands of children have become orphans and are in urgent need.

The cyclone destroyed churches and many homes of believers. In Hlaing Tharyar Township all of the church members homes except the pastor's were destroyed. Thirteen members' homes of the Reformed church in South Dagon Township were blown away. These people are now living with other members of the church and in the church building. Covenant Theological Seminary in Yangon was destroyed. There has been minimal loss of life among the believers but their suffering and loss is great.

The Committee on Diaconal Ministries of the OPC (CDM) is able to get monies to our Reformed brothers through the Fellowship. CDM is sending monies to meet urgent needs of believers who are now refugees being sheltered in churches, and to supply them with food, water, medicine, mosquito nets and candles. Until electricity is restored there is need for fresh water. Further, there is much renovating to be done for believers' homes and churches. The price for food "is ten times, jumping up, the cooking oil the same." Any donations for disaster relief may be sent to CDM. Clearly mark the gift for Myanmar Relief. All designated monies will go in full for relief.

Continue to remember the diaconal and evangelistic ministry of the Reformed believers in Myanmar. Pray for them as they suffer with the rest of their countrymen, that even this tragedy will work for their good, and ultimately for the glory of God and the growth of Christ's kingdom.