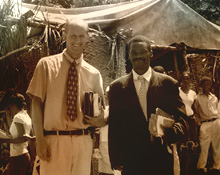 Let’s Give Thanks! Our Thank Offering 2008

Thanksgiving is a time for much more than a slice of turkey and pumpkin pie. This November in congregations throughout the Orthodox Presbyterian Church, people in the pews will be giving to the Thank Offering, a once-a-year special offering that helps to fund outreach at home and abroad, education for all ages, and ministerial training.

This is the sixtieth year the OPC is asking her members to give a little extra to support the ministries of the denomination's Worldwide Outreach. This Worldwide Outreach includes funding the work of Home Missions, Foreign Missions, and Christian Education. The OPC's goal for 2008 is to raise $750,000. Although that might seem a high goal during these tough economic times, members of the OPC raised $799,808 last year, far more than last year's goal of $700,000. It's a testimony to God blessing his church beyond what we ask or think.

"I am always stunned by the overwhelming graciousness of the members and friends of the OPC through their benevolent Thank Offering," said Danny Olinger, Christian Education general secretary. "It provides essential funds for everything we do in Christian Education."

"Each November the people of the OPC get a snap-shot of how God is blessing us," said Ross Graham, general secretary of Home Missions and Church Extension. "For Home Missions, that snap-shot shows them all the places where new churches are being started. They see the faces of the many young organizing pastors and their wives; they recognize the sacrifices that are being made, and they are renewed in their zeal to pray for them all."

Home Missions sends out pastors to plant an average of fifteen to twenty new churches each year throughout the United States, Puerto Rico, and Canada. The Committee on Home Missions also helps to support seasoned ministers who work within presbyteries to scatter the seeds for new congregations, including those in large metropolitan areas and in Spanish- and Portuguese-speaking communities. As part of their ministry, they also help to equip men for church planting.

"[The church members] learn that their gifts to the Thank Offering matter for eternity as they realize that these churches are reaching lost men, women, boys, and girls with the life-changing gospel of the Lord Jesus Christ," said Graham.

The first Thank Offering was taken up in November 1949 as a special offering above the weekly tithe to encourage missionary work and Christian education.

"Reflecting on God's goodness and mercies to them over the past year, Orthodox Presbyterians come together each November to support the ministries of Worldwide Outreach through the Thank Offering," said Mark Bube, general secretary for Foreign Missions. "For Foreign Missions, the Thank Offering has represented more than thirty percent of the total general fund giving over the past five years, and has made it possible for the Committee on Foreign Missions to press on with the work of proclaiming the good news of repentance and forgiveness of sins in Christ's name on eleven active fields, and with the opening of new mission works in places like Haiti, and, just earlier this year, Uruguay."

Since the late 1930s, the Orthodox Presbyterian Church has sent out foreign missionaries, including our first missionaries to China, Japan, and Korea. Foreign missionaries now serve in North America (Quebec), Asia (Japan, China, and Korea), Africa (Ethiopia, Uganda, and when it please our Lord to allow us to re-enter the country, Eriteria), South America (Suriname and Uruguay), Europe (Ukraine and the Czech Republic), and Haiti in the Caribbean. In January 2009, a medical doctor will be sent to serve at our medical clinic in Karamoja, Uganda.

"The Thank Offering makes Worldwide Outreach real to the people of the OPC," said Graham. "This is a difficult-to-understand concept of three General Assembly committees working together to implement, on a North American scale, the various aspects of our Lord’s Great Commission. This is brought home on a personal level each year as OP congregations collect the Thank Offering."

This Thanksgiving, give to the Thank Offering as a way to offer thanks to the King of kings for all the work he does through the Orthodox Presbyterian Church.

"Please join with us in praying for a generous 2008 Thank Offering," adds Bube.

Donations may be given through individual OP congregations or directly to the Orthodox Presbyterian Church, 607 N. Easton Rd., Bldg. E, Willow Grove, PA 19090-2539. Thank Offering envelopes are available in OP churches and in the November New Horizons magazine. Please write "Thank Offering" in the check memo line. Thank you for your giving.