How Could I Ever Be a Pastor's Wife? 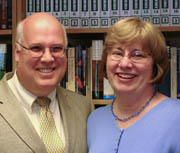 When my husband left the pastorate three years ago to become the associate general secretary for the Committee on Foreign Missions, I never imagined that I would miss being a pastor's wife more than anything else. You could have knocked me down with a balloon.

After fifteen years at Grace OPC in Hanover Park, Illinois, I missed our dear congregation, my sister who lived nearby, my job, and even Chicago. But the hardest thing to give up was the very thing I never wanted to be-a pastor's wife.

I remember when a group of ministers and elders crowded around my kneeling husband after he took his ordination vows. There was a sense of relief that the years of seminary and of summer and yearlong internships were finally over. No more macaroni dinners, typing papers all night, or graveyard shifts as a security guard. Finally my husband was fulfilling his calling ... and getting paid for it as well!

While the men were busy shaking my husband's hand in congratulations, I silently wondered whether I could live up to the role of a pastor's wife. Doug had four years of training to become a pastor. I had wide-eyed questions, a master's degree in changing diapers and cooking lentils, and a quaking stomach that echoed my fears that I would do something to hurt my husband's ministry. After all, I certainly was nothing like the pastors' wives I had known while growing up in United Presbyterian churches.

My Image of the Pastor's Wife

I pictured pastor's wives as donning pleated polyester skirts, with bows on their blouses, dowdy true-to-its-color hair, and sweet, quiet, oh so sunny dispositions. Their homes were spotless; their dining rooms were filled with guests passing around perfect roasts and lumpless gravy each Sunday; their kids wore snap-on bow ties with lacquered-down hair and polished shoes. They played the piano and organ, sang in the choir, arranged flowers for services, and led vacation Bible school. If only I had looked more closely at this paragon of pastors' wives, I might have seen that their smiles waned in the moments between shaking the last parishioner's hand and arriving home to assemble Sunday dinner.

I wasn't cut out to be a pastor's wife. My husband needed a super woman, a super mom, the Energizer bunny of believing spouses. And I was just a garden-variety believer, an average mate with no musical abilities, who burned frozen pizza, yelled at her kids within the neighbor's earshot, wore pants to evening services, and talked too much for my husband's calling. What was I to do?

Back at seminary, most of the future ministers' wives were nurses or teachers, primed to nourish others with a gentleness I had to dig down deep to muster. They didn't seem to struggle with loneliness or questioning whether to buy milk and cereal or take their toddler to a follow-up doctor's appointment. Even worse, after seminary we headed for an internship in Oostburg, Wisconsin, where I envisioned dust bunnies and dishes in the sink as endangered species among the industrious Dutch. What was I to do?

I didn't have the heart to tell Doug to go back to being a security guard or painter. Nor did I want to interfere with God's calling. I was the one who needed to change. But how? And where was I to start?

Who Is the Pastor's Wife?

I opened my ears, asked questions, and watched not only pastors' wives, but also other godly women, as they went about their everyday tasks. I copied down recipes for meals that I could make with my limited culinary skills, something that was affordable and wouldn't shrink into a hockey puck by the time church was over.

But when I asked several pastors' wives for advice on how to be a "good" minister's mate, I was surprised by their furrowed brows, which showed that they were puzzled by the question. Those whom I most admired shrugged their shoulders, utterly unself-conscious about their roles. They simply did what was needed to help their husbands.

As I checked through Scripture and listened to lectures, I began to realize that there was no biblical title of "pastor's wife." Nor were any specific spiritual gifts listed for the role. There also were no commands or biblical injunctions for this role that I felt so inadequate about. And even examples of minister's mates were scarce in Scripture.

Paul speaks about the wives of Cephas (Peter), the apostles, and the Lord's brothers in 1 Corinthians 9:5. But, as one minister's wife pointed out, all we know about these women is that they traveled with their husbands, which meant that these women walked alongside their husbands in the course of their ministries. But the verse doesn't tell us anything else about what they did for the churches, nor offer any title beyond that of a wife.

Paul limits overseers to just one wife in 1 Timothy 3:2, which certainly is a relief. But Paul makes no distinction between the roles of an elder's wife, a pastor's wife, or a deacon's wife. True, the Proverbs 31 paragon is the wife of an elder, but nothing is mentioned about her work within the church body. And no doubt her domesticity was aided by hired help-unlike most of us.

I sighed with relief. Slowly it dawned on me that I wasn't the "pastor's wife" as if that was a title or role. Rather, I was the wife of a pastor. And that made all the difference.

The Wife of a Pastor

I found myself greeting visitors, trying to say a kind word to those on the fringe of fellowship, teaching women's Bible studies, sitting in the nursery, bringing meals to the sick, and, yes, even inviting folks over for Sunday dinner-not because I was the pastor's wife, but because I was the wife of the pastor. My role as a wife prompted me to help my husband in whatever way I could to aid him in his calling as a minister.

Understanding the design for a wife set forth in Genesis, I gradually grew as a helpmeet to my husband. God made Eve a suitable helper for Adam (Gen. 2:20). The focus wasn't on my role, but my husband's. I was his support team. My self-conscious battle with the role of pastor's wife slowly slipped away.

Once I shed the title of pastor's wife, I found myself fulfilling many of those expectations I once had of a minister's mate. I learned to cook a roast for fifteen, keep my living room clean of kids' clutter, give dust balls limited visitation rights, teach women's Bible studies, and buy mousse for my daughters' hair. And, hopefully, I wear slacks on appropriate occasions. I have yet to fully master my tongue or show off my gray locks, but God isn't finished with me yet.

Thankfully, I no longer quake at the thought of being married to a pastor. When someone asks something of me because I was a pastor's wife, I smile, happy to do whatever they ask, because I'm the Christian wife of a minister. I no longer try to fulfill a special calling as a pastor's wife.

Although my relief was based more on semantics than on a transformed experience, I now can encourage seminary wives that the road to serving Christ as the wife of a pastor isn't based on pleated skirts or playing the organ. Nor is being a pastor's wife as constricting as other people's expectations. With the freedom granted to every woman in Christ, my role would be the same and gladly accepted, whether my husband were a painter or a pastor-that of a helpmeet to my beloved.

The author is a member of Calvary OPC in Glenside, Pa. Reprinted from New Horizons, August/September 2005.