Reflections on the OPC Timothy Conference

by David Winslow and Kathleen Winslow

The Challenges for an Army Chaplain

Adrian Crum once thought the gospel ministry was a blissful task involving little work. After attending the 2009 OPC Timothy Conference, the 20-year-old from Chula Vista, California, now has a different perspective. "I can look forward to Seminary and internships, realizing that I'll have to work hard, but that the work is glorious. I know now that I don't possess the strength or abilities to do this on my own. But leaning on the Lord will give me the strength to carry out this wonderful calling." 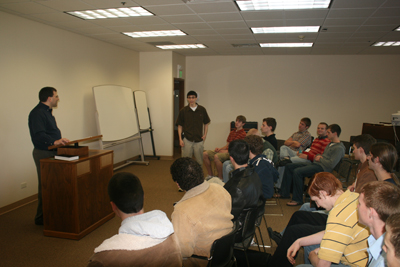 Adrian was one of sixteen young men, aged 16–21, who were nominated by their pastors and sessions to attend the 2009 Timothy Conference, held on April 16–17 at Mid-America Reformed Seminary in Dyer, Indiana. The Committee on Christian Education's Subcommittee on Ministerial Training sponsored the all-expense-paid conference.

The conference featured Bruce Hollister, pastor of New Covenant OPC in New Lenox, Illinois; Alan Strange, Mid-America professor and New Covenant associate pastor; Danny Olinger, CCE's general secretary; David VanDrunen, Westminster Seminary California professor; and Craig Troxel, pastor of Bethel OPC in Wheaton, Illinois. They spoke on a minister's responsibilities and privileges, the call and process of becoming a minister, the need for seminary training, and how to prepare academically and personally for the ministry.

Colin Doak, 18, of Jacksonville, Florida, has wanted to be a pastor since age 5. "This conference showed how much work it really takes to learn all that a minister of the gospel needs to lead God's people.... It helped me to know where to focus my studies."

Beyond hard work, Seth Dorman, 17, of Bangor, Maine, wondered, "How does one counsel, and pray, and preach week after week with a burning passion for Jesus? But it is also sweet work—the sweetest work." Sam Krieg, 21, of Fredericksburg, Virginia, recalled, "The speakers repeated over and over how much of a joy it was to be able to serve in the church and preach the Word of God."

Jordan McClellan, 17, of Hickory, North Carolina, gained insight into his pastor. "I never understood the burden my pastor held for our congregation." James O'Neil, 17, of Moline, Illinois, agreed: "It brought me a new view of an OPC pastor and a much more respectful view in light of their education."

Michael Hunter, 18, of Kent, Washington, liked the classroom visits. "Sitting in on seminary classes provided a unique insight into the life of a seminary student."

The focus on the Scriptures struck Danny Dunn, 18, of Somerset, New Jersey. "The most important point was stressed by all of the ministers: constant exposure to the Word of God is of the utmost import to anyone considering the ministry." Joshua Harper, 16, of Medford, New Jersey, agreed: "You must be in the Word constantly; it is your calling, not only as a pastor, but also as a Christian."

David Doyle, 17, of Sewickley, Pennsylvania, thinks he romanticized the ministry. "Am I striving to cultivate a servant's heart, rather than puffing myself up?... Whether I pursue ministry or not, the centrality of Christ and the need to guard my heart will ever be present."

Ministers can't do it by themselves, Sam Lofton, 17, of Columbus, Ohio, learned. "I can do nothing in and of myself." That comforted Robbie Pfaff, 17, of Tri-Cities, Washington, who, like Pastor Hollister, is terrified of public speaking. "I could identify with him, and it inspired me to know that if God calls you to the ministry he can use you and will give you the courage to stand and proclaim the gospel, even if you don't think you have what it takes to speak in front of a crowd."

Some want to become pastors. "It reaffirmed my desire to become a minister by showing me the hidden glory of it," said Andrew Van Dyke, 17, of Wyoming, Michigan. Others, like David Wagenmaker, 16, of St. Louis, Missouri, are unsure.

Fellowship was important to Matt Neumann, 18, of Columbus, Ohio. "The most encouraging aspect of this conference was seeing the other young men who stand for their faith and doctrine."

Peter Madsen, 19, of Portland, Oregon, commented, "This conference made my heart yearn to reach the lost, and preach to the people of the world the good news of Christ."

"The SMT has been thrilled at the response to the Timothy Conference by young men considering the gospel ministry in the OPC and their godly character," said Olinger. "We look forward to hosting many more."

The author is the office secretary for the Committee on Christian Education. Reprinted from New Horizons, August-September 2009.

by David Winslow and Kathleen Winslow

The Challenges for an Army Chaplain