A Jazz Pianist Playing for the Glory of God 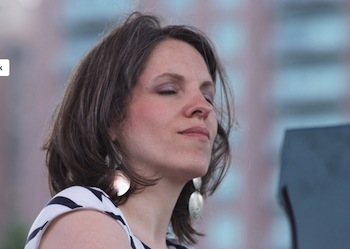 Music became both Pamela York’s vocation and her introduction to Christ.

She played in her high school band with the sons of a Christian Reformed Church pastor, and she began playing piano in their church even before taking membership vows at age 20. Now she accompanies worship at Providence OPC in Kingwood (Houston), Texas, where her husband, Adam, is the pastor.

But her vocational music is very different from Trinity Hymnal.

A jazz pianist, she discovered improv as a ten-year-old, when a musical family moved into her neighborhood in Nanaimo, British Columbia. They took her to open-mic country jam sessions, where she had to “rise to the occasion and follow songs by ear.”

She now plays jazz piano around the Houston area and tours occasionally in the U.S. and Canada. She has recorded albums and has a Pandora station. Her repertoire is a mix of hymns, spirituals, and her own compositions.

She is also a homeschooling mom to Anna, 11, and Jonathan, 5.

These roles can leave her feeling like she inhabits very different worlds.

She sometimes feels “like a rebel in the church, but way conservative in the world,” she said. It helps that there seem to be more Christian musicians in Houston than in other places where she has lived.

It also helps that jazz has gained respectability. The “smoky bar image” of old has been replaced, now that jazz is taught at the university level. And some jazz musicians, such as Duke Ellington and Mary Lou Williams, performed sacred music in the jazz style, so York isn’t alone in jazzing up hymns.

It’s also a challenge to be both a mom and a professional musician, and it can leave her feeling like she’s “not doing 100 percent at either thing.” But she also finds blessing in combining the two roles. As a musician, she’s more relaxed because she realizes there are “other things in life to nourish” her. And after a good practice session, she feels fulfilled creatively and carries that joy into her home duties.

“It was very helpful for me to get a lot of experience before I married and had children,” she said, noting she worked a lot while her husband was in seminary. Now her career is moving more slowly than those of her single friends.

But she has “a lot of joy and support” from her family.

Sabbath observance can also be a problem in an entertainment career; York has simply had to turn down most Sunday gigs. It’s easy to do that now, but it was hard during the seminary years, when finances were tight.

“We just had to trust the Lord that we’d have enough to meet our monthly expenses,” she said.

The joys of being a Christian musician, however, are manifold.

Playing a hymn or spiritual provides an opportunity to have faith-related conversations with audience members as she explains the song’s background.

“I just pray before I perform that the music would be to the glory of God—that regardless of how I’m feeling, the Lord would be honored in my work.”

The author is a member of Grace OPC in Columbus, Ohio. Pamela York’s albums, concert schedule, and other information are available at pamelayork.com. New Horizons, March 2015.