For the Lord is good; his steadfast love endures forever, and his faithfulness to all generations. —Psalm 100:5

Another chapter in the story of God's people in the Orthodox Presbyterian Church drew to a close this past year. Almost from our very beginning, we have had missionaries laboring in Korea, except for brief periods of being excluded from the country during two wars. But our direct missionary involvement in Korea has now ended. Read more

So when God desired to show more convincingly to the heirs of the promise the unchangeable character of his purpose, he guaranteed it with an oath, so that ... we ... might have strong encouragement to hold fast to the hope set before us. We have this as a sure and steadfast anchor of the soul. (Heb. 6:17–19)

Since the earthquake in Haiti, the truth of God's unchangeable character and his promise to his people have provided hope and encouragement. Although life in Haiti will never be the same, the goal and vision for our OP mission there remain the same: preach the word, bring a cup of cold water as it is needed, and pray for God to bring growth to the church. Read more

(Editor's Note: The Orthodox Presbyterian Church will be celebrating its seventy-fifth anniversary in June of 2011. In anticipation of that milestone, New Horizons will be running a yearlong series of historical remembrances.)

Art Armour is remembered by many as one of the early fathers of the OPC (known as the Presbyterian Church of America from its founding on June 11, 1936, until 1939). Art was an elder at Westminster Presbyterian Church of Grove City, in western Pennsylvania, when it affiliated with the new denomination on October 20, 1936. When the Christian liberty controversy divided Westminster in 1937, he went to Faith PCA/OPC (which became Calvary OPC in 1966) in Harrisville, where he served on the session, while his father stayed with Westminster as it joined the Bible Presbyterian Church. This church changed its name to Covenant and later a portion of the congregation split off to become Wayside Church. When Wayside came into the OPC in 1949, Art had the unusual experience of serving on a committee of Presbytery to examine (and approve) his own father, T. F. Armour, for service as an elder. Covenant became independent and then joined the Reformed Presbyterian Church, Evangelical Synod, before reuniting with Wayside in 1965 and becoming Covenant OPC in 1966. So all the pieces of the original Westminster Church ended up in the Orthodox Presbyterian Church. Read more

by David A. Crum

In December 2009, a short-term missions team from the Presbytery of Southern California traveled to Uruguay to assist in the ministry of OP missionaries Jonathan and Margaret Falk. The nine-member team included Jane Crum, Adrian Crum, Jana Crum, Emily Cunningham, Geoff Downey, Jake Schroeder, Ben Waggoner, and Kathleen Winslow, and was led by the Rev. David A. Crum, regional home missionary for the Presbytery of Southern California, who wrote the following report. —Mark Bube 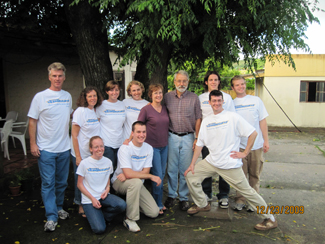 The Apostles' Creed, Part 3: I Believe in the Holy Spirit

There has been a good deal of confusion about the person and work of the Holy Spirit. Some see the Spirit as some sort of vague force that inspires people to certain heights of artistic expression or particular giftedness. Some in the church see the Spirit as the dispenser of spectacular gifts.