Lessons from the Life of an Extraordinary Ruling Elder

The Biblical Foundation of the Diaconate

Tools for the Elder's Toolbox

One of my most cherished pictures affixed to the crowded bulletin board in my study is a picture of me standing with Dr. Herbert R. Muether during one of the past General Assemblies of the Orthodox Presbyterian Church. I cherish the picture even more now since Dr. Muether went home to his eternal rest on the evening of December 24, 2005. Dr. Muether had served as a ruling elder in the OPC since 1963 when he was ordained to that office in the Orthodox Presbyterian Church in Franklin Square, New York. It was my privilege to serve with him from the time I began my service in Franklin Square in February of 1981 until 1999 when his membership was transferred to our daughter congregation in Bohemia-a mission church nearer to his home and for which he and his wife had prayed for many years. Following his death I was asked to write an article for Ordained Servant giving some lessons that Dr. Muether's life would offer to other ruling elders. I accepted the assignment gladly, for Dr. Muether was one of the most extraordinary ruling elders with whom I have ever worked. The other elders on our session who also had that privilege over many years will most certainly agree to that assessment. I think that they, too, would commend these lessons to you:

The Beauty of Reformed Family Life

My wife and, at that time, one son (we eventually had four more sons and then a daughter) got to know the Muether family (or, at least, those who were home at the time-Herb and Anne also had six children-two girls and four boys, one of whom now serves as our OPC historian) one day when we were invited for an afternoon and for dinner at their home in Stony Brook, New York. Dr. Muether was, for many years, a professor of physics at the State University of New York in Stony Brook in Suffolk County, Long Island. It was fascinating to learn how Herb and Anne had met at Princeton University, had eventually made their way to the OPC after realizing the liberalism that had ravaged the PCUSA, had raised six children, on Dr. Muether's salary, on expensive Long Island (a great encouragement to us as our family grew in number!), and had thoughtfully worked through the various aspects of raising faithful children in an area dominated by secularism. But what really impressed us most was that-in everything-the things of the Kingdom of God were paramount to them all. That afternoon and evening provided an unforgettable model to us of the beauty of Reformed family life: a life in which God, his Word, kingdom, and church are regarded as the most wonderful things given to us in the covenant of grace. We deemed it "regarding the supernatural naturally," and that phrase has stuck with me ever since. Part of an elder "ruling his household well" (1 Tim. 3:4) is that, far more than following a formula, he "seeks first the Kingdom of God and His righteousness" (Matt. 6:33) in everything. This was the first of many lessons that I have learned from Dr. Muether and his family.

Commitment to the Church

Dr. Muether and his family traveled nearly an hour to Bible School and worship in Franklin Square every Sunday morning. In the evenings they attended a church that was more local to them simply because it was not reasonable to make another two hour round trip on the Lord's Day. In addition, Dr. Muether would faithfully attend our monthly session meetings, usually by taking a ninety minute train ride from Stony Brook to a nearby railroad station. Ever punctual, he would dismiss himself from our meetings no later than 11:10 p.m. so that he could catch the last train home. Not once did I hear a complaint from him, despite the fact that he had to begin teaching early the next morning after getting only a few hours of sleep. He always expressed thankfulness for a church that was committed to the Reformed faith and Reformed worship, and for the privilege of serving Christ in his church. The church, to Dr. Muether, was the most important institution on earth. That importance extended to each of its governing assemblies. Dr. Muether faithfully attended General Assemblies when he was elected a commissioner. He served as a commissioner at twenty-one OPC General Assemblies! Once, after I had attended a few General Assemblies in a row, I had the temerity to blurt out that I did not want to attend another one for awhile. "But you ought to want to attend every one," he rightly chided me in response. I never forgot that necessary admonition (and the way it was given). To this day I can say honestly that I regret it if I am not able to serve as a commissioner to the General Assembly. By word and example Dr. Muether taught me (and many others) the importance of commitment to the church.

For over thirty years Dr. Muether served as clerk of session in Franklin Square. We went into a period of mourning when he was transferred to the OPC in Bohemia (where he also served as clerk of session). Every session needs a Herb Muether for a clerk! The taking, writing, and approving of minutes was a sacred task in our meetings. And, in every sessional decision, we were taught to be concerned for proper procedure. The Book of Church Order provides house rules for the congregations of the OPC, and we were meant to abide by those rules (another level of Reformed family life). Dr. Muether never saw this in a stuffy or lifeless way, but as good order by which Christ's business was to be carried out. Through his sanctified German temperament and his experienced Presbyterianism I learned the invaluable lesson that the devil is not in the details, Christ is! There is a true spirituality in decency and order (cf. 1 Cor. 14:40) and Dr. Muether inculcated that in me.

From the time I began my service as pastor in Franklin Square I had a difficult time with the church's practice of using grape juice instead of wine in the Lord's Supper. I raised the issue in my early years in Franklin Square, but Dr. Muether (who agreed with me on the issue) questioned whether it was the proper time to make that change in church life. In the midst of many other changes the church was going through he was concerned that the session's responsibility to preserve the peace and unity of the church be honored, as well as our concern to advance its purity by ongoing biblical reformation. Later the change came-with a unanimous vote of the session and with hardly a rustle in our church life; but through that experience I learned the importance of picking battles in church life carefully, and fighting them at the right time as well as in the right way.

Dr. Muether was not a man given to many words; but when he spoke, you listened! No ruling elder was as quick to defend a minister as was Dr. Muether; but his first concern as a ruling elder was always faithfulness to the Word of God and the honor of Christ as king and head of his church. His manner of rule could be best described as "quiet boldness." One Sunday morning I made a statement from the pulpit that could have been construed as meaning that it was wrong for a mother to work outside the home. At the door after the service had concluded Dr. Muether gently but firmly told me that I had the right to my own personal convictions, but that, as a minister, I did not have the right to impose those convictions on others, especially from the pulpit. I made a full correction the next Sunday morning! This was another lesson I never forgot. Not only the lesson regarding the limits of my ministerial authority, but also the lesson about the importance of a ruling elder's quiet boldness in the Christ-like exercise of his office.

Dr. Muether was a brilliant man, yet he always possessed the faith of a little child, (cf. Luke 18:17). With childlike trust in his "sovereign God" (his favorite title for the God whom he loved) he spoke of him and believed that, in time, he would do exactly as he promised. Out of this "peace which surpasses all understanding" (Phil. 4:7) he lived and served and modeled the Reformed faith to others. His prayers always reflected the awe of God possessed by one of his children and the simplicity of a man who did not need to persuade the Lord by many words or sophisticated arguments. Through Dr. Muether I learned that one who rules in God's house must first show that he himself is ruled by God; and that shows itself, most of all, in childlike (but not "childish") dependence upon God.

The Importance of a Godly Wife

Behind every outstanding minister or ruling elder is an even more outstanding wife! Such was true of Dr. Muether, for whom Anne was truly a "helper suitable to his needs" (Gen. 2:20). We were wont to say in Franklin Square that the only person in the church who was smarter than Herb Muether was Anne Muether (who, among other things, had known Albert Einstein and worked on the Manhattan Project before taking on the more important work of becoming Herb Muether's wife, keeper of the home, and the mother of their six children). There was no doubt that Herb was the head of his home, that Anne was submissive to her husband in everything (Eph. 5:24), that she was "one flesh" with him in his love for Christ, the Reformed faith, the church, and its service, and that this was anything but stifling to this woman of great intellect and skill. I cannot begin to estimate how much this example impacted my own wife, Margaret; especially Anne's encouraging her to pray daily for God's saving grace in our children, and also to pray daily for godly spouses for them. Anne had prayed that we would have at least one daughter. When our Elisabeth was born (after her five brothers) we had no doubt that her middle name, Anne, would be in honor of Dr. Muether's extraordinary wife! We too easily forget that the wife of a ruling elder can be, in many ways, as important in the life of the church as the elder himself. 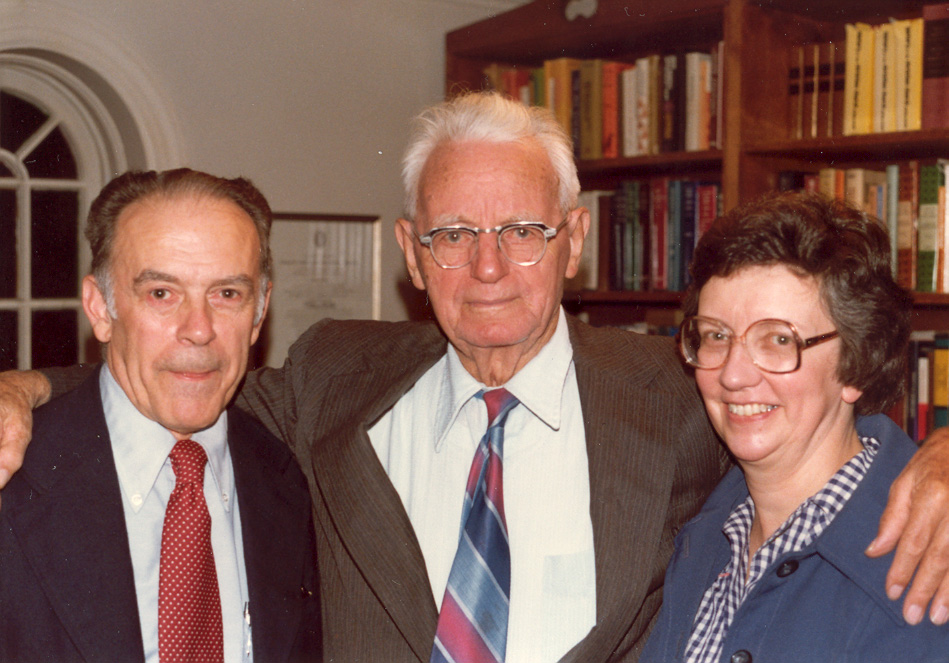 How I wish that all ministers could have the benefit of the friendship and co-labors of an elder like Dr. Herbert Muether. His influence on our session, the congregation, and me personally was inestimable. I will be forever grateful to the Lord for bringing our paths together for so many years of service. May this tribute be an encouragement to all who serve as church officers. Simple faithfulness to our faithful God is one of the most powerful instruments by which Christ builds his church (cf. 1 Cor. 4:2). Dr. Muether, a sinner saved by grace whom Christ formed into an extraordinary ruling elder, is a testimony to that grand truth.

William Shishko is the pastor of the Orthodox Presbyterian Church in Franklin Square, New York. Mr. Shishko served on the Committee on Christian Education for many years. Ordained Servant, January 2007.

The Biblical Foundation of the Diaconate

Tools for the Elder's Toolbox