As I write[1] I am preparing a sermon on the second Servant Song in Isaiah 49. In my files on the prophets I found a paper on Isaiah 49:6-7 presented to Dr. Kline on November 22, 1978, for his class on the "Prophetical Books" at Westminster Theological Seminary—there was only one in those days. It reminded me that Kline's biblical theology was influencing me despite some resistance. Having fortified myself against the fragmenting tendency of dispensationalism with the unity of the covenants discovered in the covenant theology of O. T. Allis and John Murray, I was in no mood to consider the discontinuity between old and new covenants. In reviewing my paper, I find that nine of fifty-five end notes refer to Kline's class notes or writings. The Vos-Kline influence was operating below my intellectual radar. Later, after years of scripture study and weekly sermon preparation, it began to sink in that continuity and discontinuity were not mutually exclusive but necessarily complementary concepts—and essential for both biblical theology and its systematic brother.

Just after the covenant theology of our Confession began to become clear to me, a remarkable offer came my way. Meredith George Kline and his son Meredith M. had heard of the modest school that pastor Allen Tomlinson and I had started in the late 1990s.[2] The Klines offered to teach. I was amazed. Thus, began a four year stretch of their selfless efforts to teach a small number of hungry students. M. G. Kline taught a full ten-week course, based on Kingdom Prologue titled "Covenant-Kingdom Foundations" in the fall of 1999; another staple of his teaching career, "Old Testament Prophets" in the fall of 2000; and then "Old Testament Exegesis," which focused on the night visions of Zachariah, based on Glory in Our Midst, in the fall 2001.[3] Finally in the fall of 2002 Meredith taught his last class—he ended where he had begun (in good eschatological fashion) with "Covenant-Kingdom Foundations," a fitting conclusion to a brilliant career; and like one of his theological heroes, J. Gresham Machen, he finished happy to serve in humble circumstances. Even his and Grace's decision to move to New England in 1965 was rooted in a sense of the spiritual need of the region. A continual presence as a helper at the Deerwander summer camp demonstrated his dedication to serve his Lord above all else.

I still marvel that one of the finest living Hebraists taught in our little church for forty evenings. I chuckle as I remember how he resisted my clipping a microphone to his lapel. But soon he forgot that he was being recorded. He taught with all the energy of a man half his age, and as if we were a room full of hopeful seminary students. He was a scholar of the top rank, and a fine writer, and a very creative and insightful biblical theologian; but he was above all a teacher, with a passion for his subject.

Kline was a gentle and gracious man, especially in disagreement, but not one to back down from controversy when it came to cardinal doctrines of the faith. Also, as a good professor, he knew how to keep students on the alert by teaching insights on the text of Scripture that sometimes went against the grain of conventional evangelical wisdom. Sadly, his view that Genesis 1 is a literary framework has sometimes prevented those who disagree from exploring and appreciating the riches of his exegesis both of that passage and the rest of his extensive work. Often overlooked is his brilliant exegetical defense of both the historicity of the Old Testament narrative and the mid-second millennium BC date of the Exodus. No one has helped me understand and preach the Old Testament like Kline. I don't need to agree with everything he taught to do so.

Further, Kline's writing style has prevented some from benefiting from the profound insight and "breath-taking vistas" he presents in his writings. Just as he often went against the grain of conventional evangelical wisdom, so he developed a rich vocabulary to express his insights, in place of more conventional Christian vocabulary. Far from using such creativity as a ploy for theological innovations, this vocabulary was rooted in the vocabulary of the Bible, often hyphenating transliterations of the original languages, such as in God, Heaven, and Har Magedon. Such linguistic artistry was a pedagogical technique to awaken students to the depth and breadth of Scripture's meaning. Let me suggest that it was the artist in Kline that, humanly speaking, enabled him to see what he saw in the text and express it as he did, both in the details of exegesis and in his larger redemptive historical program. Allow me to elaborate.

Several things about Dr. Kline's character and gifts stand out as I came to know him since 1978: he looked like a combination of Frank Lloyd Wright—though thankfully not imitating his arrogant character—and the famous German violinist Fritz Kreisler: the artist and the musician. It was not until his memorial service that I learned that Kline was a violinist and a member, with his artist wife Grace, of the Guild of Beverly Artists. God, Heaven, and Har Magedon is dedicated to Kline's three sons: Meredith M., littérateur-theologian; Sterling, architect; and Calvin, musician-maestro. The painting featured on the cover is by Muriel Grace Kline of the White Mountains of New Hampshire (an apt depiction of the heavenland, in my unbiased opinion). Artistic sensibilities clearly run in the Kline family.

Dr. Kline playing the violin with Howard Porter at the piano in 1957 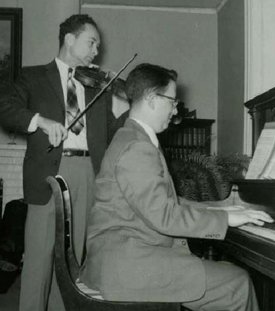 Kline's literary artistry was manifested in his ability to discern patterns, especially literary structures, and to see the beauty of both aural and visual imagery in the biblical narrative. In seminary I wondered if he wasn't finding chiasms where there were none. More recently, however, my media studies have helped me understand the literary structure of oral cultures, especially those predating the printing press. Communication in memorable oral and visual patterns was mnemonically essential. Renewed appreciation of the presence of literary artistry in ancient documents has revolutionized Old Testament and New Testament studies. Kline was on the vanguard of this movement, as one of the few in his day who was solidly committed to the inspiration of Scripture.

The word "artist" in the title of this tribute is first, but as a modifier, not as the most important thing. It is meant to give perspective to Kline's work as an exegete and biblical theologian. His first commitment was to accurately unpack the meaning of the inspired text of God's Word. His artistic sensibilities did not lead the way in his exegesis—that would lead to eisegesis. In this regard the New Oxford American Dictionary gives us a helpful definition of "sensibility": "the ability to appreciate and respond to complex emotional or aesthetic influences; sensitivity: the study of literature leads to a growth of intelligence and sensibility." Kline had the uncanny ability to see the literary structure of the Old Testament text as a formative influence on his interpretation of the details of his linguistic analysis.

Furthermore, Kline's observation of patterns in the textual fabric of Scripture served to fortify the traditional covenant or federal theology of the Reformed tradition. He drank deeply of the covenantal structure enumerated by the Westminster Confession and Catechisms. The three essential kinds of biblical covenants were staples of his teaching and writing vocabulary: the covenant of redemption (or peace between Father and Son); the covenant of works (between God and his representatives, the first and second Adams); and the covenant of grace (between the Son and the elect). He understood the importance of this system to the various doctrines of the systematic enterprise—especially the doctrine of justification. He saw the foundational importance of the covenant of works to the nature of justification and the imputation of Christ's righteousness. In the true Vosian spirit, he believed that 2 Corinthians 5:21 teaches that Jesus advanced our nature. The eschatological hope given to Adam in the garden was realized, not in a return to Adam's prelapsarian nature, but in the crucified and resurrected Christ. Appropriately he dedicated his biblical theological reading of Zachariah's night visions, Glory in Our Midst, to Geerhardus Vos.

Kline's giant intellect was also used to make significant exegetical and theological contributions in the areas of canon; the relationship of the Bible to culture and science, as he explored the biblical doctrine of common grace. For all of his linguistic expertise, Kline never got lost in the details, but rather marshaled them in the service of the grand unified narrative of redemption.

In the great Princeton tradition, Kline believed in the use of intellect to serve the Lord and his church. Perhaps this is why his grandchildren called him Grampa Hodge. In the great Hebrew tradition, he was like a Torah scholar, poring over his Hebrew text for hours in his study—his maternal grandfather was Jewish. An assiduous worker, he wrote all of his books and articles with pen and paper. But, like the apostle John, he preferred personal conversation, as the many hours he was willing to spend with me in recent years attest. Although he was not a gifted preacher, he had a fine pastoral sensitivity. When a student sought comfort upon the miscarriage of his young wife, Professor Kline did not offer an elaborate theodicy, but rather the counsel of a simple and humble piety: "God is a good heavenly Father." In imitation of his faithful covenant God, Dr. Kline was loyal to friends, family, wife, and church. My last communication from Dr. Kline was April 10, 2006. I was deeply impressed with the fact that he took the time to hand write a letter while experiencing the side effects of radiation treatments. He impressed me with the importance of continuing in the "Machen legacy." He also summed up the purpose of God, Heaven, and Har Magedon as "an urgently needed defense of vital, essential elements of traditional covenant theology ... and at the same time a probing of some frontiers in biblical theology." Truly this is the Machen legacy.

He always had a book to read and wrote a few of his own. On April 14, 2007, Professor Meredith George Kline went to be with his Lord. The opening and closing lines of his last book God, Heaven, and Har Magedon, reveal his hope, "The Bible tells us of the existence of a realm our mortal eyes cannot see."[4] The last sentence reads, "The predestined pleroma of Christ will be assembled in fullness of joy before his Parousia-Presence on consummated Har Magedon, Mount of Gathering."[5] His prayers before each class convinced his students that he believed what he taught. For over half a century he taught students to exegete and preach the Christ of Scripture whom he loved. Meredith George Kline was truly one of our great professors of biblical theology and one of our great professors of Christ.

We end where we began, because as in biblical theology so in the life of the Christian, the end is in the beginning. The hope of the heaven land was the inspiration for the scholarship and teaching of MGK. His life ended with this hope—the reality he taught us all to hunger and thirst after in Christ—the hope rooted in the suffering and glory of the second and last Adam, the coming consummate glory in which the triune God will reign supreme in Christ.

[1] I owe many of the insights and ideas in this editorial to those who spoke at Dr. Kline's memorial service, held at First Presbyterian Church, North Shore on April 18, 2007: Meredith M. Kline, David O'Leary, David Van Drunen, Gordon Hugenberger, and Russell Copeland.

[2] The Granite State School of Theology and Missions held its first classes in 1997.