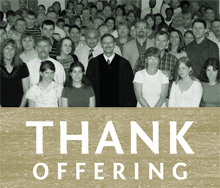 That They May Be One!

The annual Thank Offering has played a crucial role in supporting the worldwide outreach of the Orthodox Presbyterian Church. This year is no different. The important ministries of Christian Education, Home Missions, and Foreign Missions depend on the generosity of God's people in the Thank Offering to make up for any budget shortfalls and to carry the work through into the next year. If you are a member of an OP church, please donate through your local congregation. If you are not a member of an OP church and would like to participate in the Thank Offering, please click here for donation instructions.

This year, four separate bulletin inserts were sent to OP churches, explaining the importance of this annual offering to various OPC ministries. The text of these inserts follows.

When the apostle Paul was just beginning his ministry in Corinth and encountered some opposition, the Lord instructed him in a vision to continue preaching there, "for I have many in this city who are my people" (Acts 18:11). These "many" were the elect of Corinth, but they were not yet Christians. So Paul continued his ministry in Corinth for another eighteen months, seeking to reach these people with the gospel and gather them together into the church.

Throughout the world today, millions of people are already believers. However, many millions more are not believers. But among them are many who are God's people! Thousands of them, perhaps millions of them, are God's elect people. They don't know it, but they are waiting to hear the gospel effectually preached to them, so that they will be converted and become disciples of Christ.

Our task, as God's people who are already believers, is to bring the gospel to God's people who are not yet believers. The Lord wants them to join us as part fo the worldwide church of Christ, seeking together to serve our Savior. By doing this, we will fulfill our Lord's prayer on the eve of his arrest and departure from this world: "I am no longer in the world, but they are in the world, and I am coming to you. Holy Father, keep them in your name, which you have given me, that they may be one, even as we are one (John 17:11).

Jesus was praying, not only for those who were already his disciples, that they would be united in his church, "but also for those who will believe in me through their word" (verse 20). To what end? "That they may all be one" (v. 21).

Jesus received glory from the Father, and he gives that glory to his disciples, "that they may become perfectly one, so that the world may know that you sent me and loved them even as you loved me" (verse 23).

Every year, churches and individuals give money to support the labors of Worldwide Outreach. But every year those funds fall short of the amount approved by our General Assembly to carry on the work before us. So we need the Thank Offering to meet our financial goal and hopefully even provide a little boost heading into the new year.

We have every confidence that our Lord has a great year ahead of us as we reach out with the gospel to a needy world. Let us all work together to make it happen! Let us unite as one in the Thank Offering to help Gd's scattered people become one with us in Christ's church.

The Committee on Christian Education aims to be a servant that assists in advancing the educational ministry of the OPC - working with local churches, presbyteries, the General Assembly, and its fellow program committees of Home and Foreign Missions.

Thank you for your support of the CCE and its ministries through your gifts to Worldwide Outreach, including the 2007 Thank Offering.

The CCE publishes New Horizons, the monthly magazine of the OPC. New Horizons provides news about the OPC and its ministries and also articles on Christian faith and life that reflect OP standards.

The CCE provides guidelines and financial assistance to OPC churches where men aspiring to the gospel ministry can develop their gifts under the oversight of mentoring pastors and sessions. This past year, the CCE helped sponsor over twenty yearlong and summer internships.

Since 1975, GCP has served as the joint publishing ministry of the OPC and the Presbyterian Church of America in the production of Sunday school and catechetical materials. GCP also publishes Trinity Hymnal and other resources (see GCP.org).

The CCE operates OPC.org, the official website of the OPC. Visited by thousands daily, OPC.org provides a growing array of resources, including a directory of OP congregations, a Trinity Hymnal concordance, and online ordering of OP publications.

The CCE directs the Ministerial Training Institute of the OPC, an interactive institute designed to improve ministerial service in the OPC through courses in the Westminster standards, Presbyterian church polity, OP history, Reformed worship, practical theology, homiletics, ecclesiology, and apologetics.

The online monthly magazine of OPC.org is Ordained Servant. A hardbound yearly edition of Ordained Servant is available free to all OP pastors, elders, and deacons upon request, and at a cost of $10 to those who are not officers. Please see the publications page to order online.

The CCE regularly publishes informative materials that local congregations can use. Among its titles are: What is the OPC?, Why Join a Church?, What is the Reformed Faith?, Why Does the OPC Baptize Infants?, Get to Know Us Better. The CCE also carries The Confession of Faith and Catechisms and The Book of Church Order.

Across North America, God is raising up new Orthodox Presbyterian churches. Throughout 2007, your offerings for Worldwide Outreach have allowed the Committee on Home Missions to support forty-five mission works and nine regional home missionaries.

These mission works are gathering Christ's scattered sheep. In these new congregations, Christ's disciples are worshiping him, learning more of him, and being trained to follow him more faithfully.

The people being gathered come from many different people groups. Some are in small towns like Brainerd, Minnesota, and Mifflinburg, Pennsylvania. Others are in large metropolitan areas like Chicago, Illinois, and Dallas, Texas. Some are Caucasian. Others are from Hispanic, Brazilian, Korean, or Indonesian cultures.

Medford, New Jersey, is within the orbit of greater Philadelphia. There Immanuel OPC is busy gathering in Christ's scattered sheep. On one Lord's Day, twelve people were received into the congregation. Along with a covenant youth who was professing her faith and families who were transferring their membership was a single mom who professed fith and was baptized. Then she presented her daughter for baptism.

Mount Rose OPC in Reno, Nevada, has been developing well. Elders have been trained. One thousand postcards have been sent to new residents. Bibles and other literature have been distributed at their table in a local famers' market.

In St. Paul, Minnesota, Mission OPC has seen God at work in wonderful ways. When organizing pastor John Shaw and his wife Anne arrived, their four children doubled the number of children in the mission work. Anne made it a regular matter of prayer that God would add more children to the congregation. Over the new year, God doubled the number again.

Several times in our Savior's intercessory prayer on the night of his arrest, he beseeches the Father for the ones for whom he is about to lay down his life: that they may be one.

The Son's plea as the hour of his death approaches is that they might be gathered into one body, his church, with him as its head, that they might all be stirred and emboldened by one Spirit, and that they might be united to one another in love and good deeds. After his resurrection and return to the Father, Christ would give to his church all the means necessary for the gathering and building up of the people of God until he comes again, and he would, by his presence and Spirit, make them effectual for that purpose.

Faithful to the command of her Master, the Orthodox Presbyterian Church sends missionaries to the ends of the earth to proclaim the good news of repentance and forgiveness of sins in Christ's name to those still in bondage to sin and to bring them into a local congregation of his church. There, through the diligent use of the means of grace, their hearts will be established in holiness and comfort through faith unto salvation.

Brothers and sisters in Christ in Asia, Africa, Haiti, Japan, Korea, Quebec, Suriname, Uganda, and Ukraine are hearing their Master's voice in the voice of his servants. They are being drawn by faith unto Christ, conformed to his image, and subdued to his will. As they join with congregations of like faith and practice under Christ, they are receiving that sign that marks them as belonging to him. Most of us will probably never meet these brothers and sisters in this life, but because we are united together in Christ, we are already one, and the day is coming when we shall be together, face to face, around the throne of Jesus.

Some of these brothers and sisters will have endured terrible things because they have been identified with Christ's church. All will be confessing their gratitude to the Lord for sending his servants to them to tell them about Jesus, to help incorporate them into his body, and to stand with them during their times of adversity.

Won't you join with other Orthodox Presbyterians in this work? Please support Worldwide Outreach and give generously to the 2007 Thank Offering.