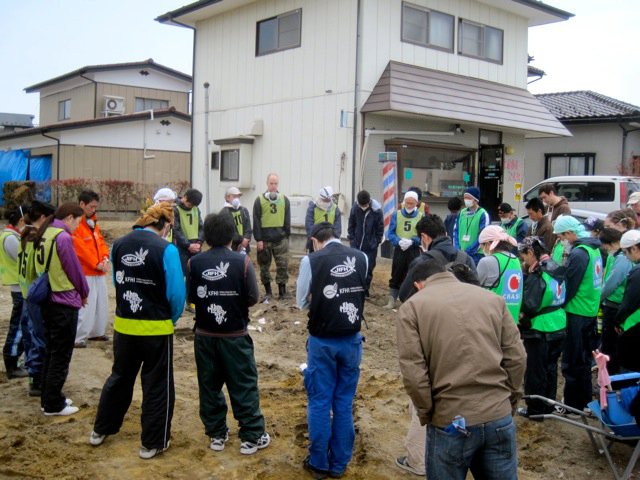 Today we visited the work-site of Pastor Tateishi. He is the pastor of the East Sendai RCJ, but we did not meet him in East Sendai. We met with him in a neighborhood north of Sendai, toward Ishinomaki on the coast. Many homes in this area were flooded up to the ceiling of their first floor with dirty black sea water. After the water receded, the photo albums, books, tvs, couches, food from the kitchen and everything else from that first floor, not to mention all the other items from outside that the water carried in, were left in one huge jumbled, soaking mess! Not only that, but this filthy water has soaked into the walls and insulation and is trapped in the crawl space under the house.

Pastor Tateishi has been leading teams of volunteers in showing the love of Christ with those who will invite them in. They have been dragging the contents out of the houses, power washing the first floor, prying up the floor boards and removing the acrid water, bucketful by bucketful, from underneath the house. The heart-broken homeowners (most of whom do not carry tsunami insurance) are humbled and astonished by the love shown to them by complete strangers. Pastor Tateishi says that they allow the Lord to place in their path who he would have them next serve. He pointed around the neighborhood, explaining that one by one, the Japanese homeowners have been opening up to be willing to accept their help, a very significant thing for the typically resilient, self-sufficient Japanese. The witness of the church in this area has been immense, and they give God the glory.

Our builder, John Voss and engineer, Luke Brown, completed thorough surveys on several of these homes, inspecting for hidden earthquake damage, seeking to get a sense of the type of repair work for which a construction crew might need to be prepared. This proved to be an interesting exercise, in that most Japanese homes are "post and beam" construction in contrast with the studded wall construction we are most familiar with in the US. 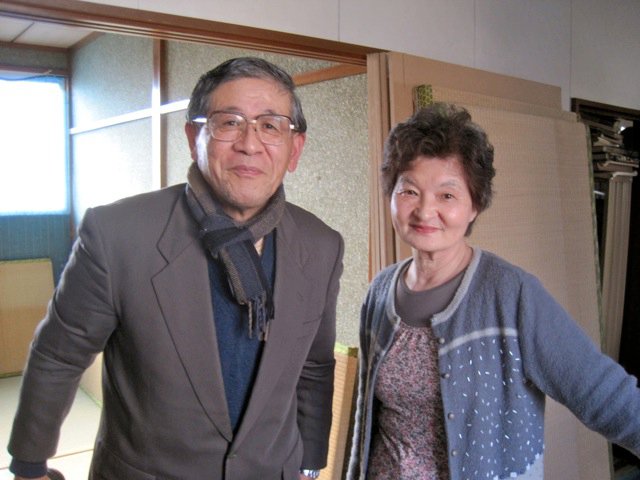 We then drove through a good bit of the devastated areas of Ishinomaki. The destruction was vast, reminding me quite a bit of the destruction I saw on the Gulf coast shortly after Katrina. The immensity of the strength and power of the water is simply unfathomable. The vastness of the damage is beyond description. And this was our sense after only viewing but a small area of just one town out of the hundreds that have been affected. And yet, as we drove back inland just a few kilometers, life is largely back to normal with little sign of what lies just a few blocks over. Incredible how quickly life can change for one, but not another.

We enjoyed a quick visit with Luke Cummings and his wife. We thanked him, on behalf of the Committee on Diaconal Ministries, for his quick and selfless serving of others shortly after the disaster. His ministry of driving in supplies into the disaster zone was a great blessing and encouragement to our missionaries and to many in the affected area. Not but a little after meeting with Luke, we heard this directly from the lips of Pastor Shiratsu as we met up with him and his wife at the church in Ishinomaki. If you will recall, Pastor Shiratsu was the one pastor whose survival our Japan Mission was not able to verify for several days after the tsunami. This was because he and his family had barely escaped and were living without the ability to communicate their survival. They told us about their narrow escape and what life was like in the evacuation shelter for 23 days; 10 days without any running water with which to bathe! They were so thankful when Luke arrived at the shelter with much needed supplies, since supplies were not adequately coming through by the government to this shelter that was housing 1500 people. (Their first meal was a piece of chocolate and a piece of gum!)

We have continued to drive north. We have stopped for the night in Minami, halfway up to Hachinohe, on the north end of Japan's main island. For tomorrow, we anticipate a few more church visits and then a long drive back down to Sendai tomorrow. We appreciate and give thanks for your continued prayers.

(In the process of writing this note, I felt my first quake while here in Japan; a 6.1 magnitude.) 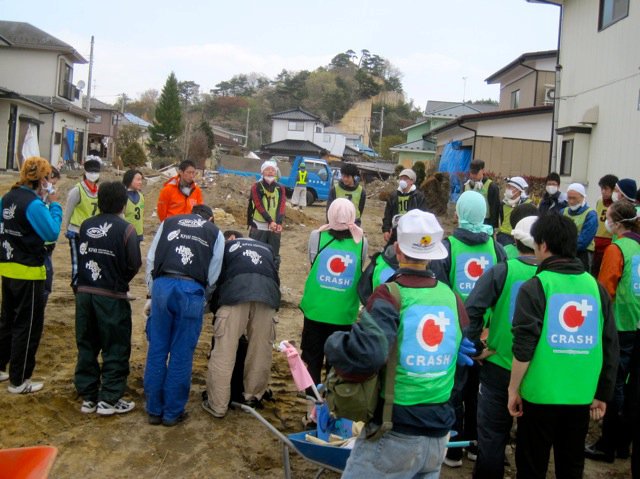 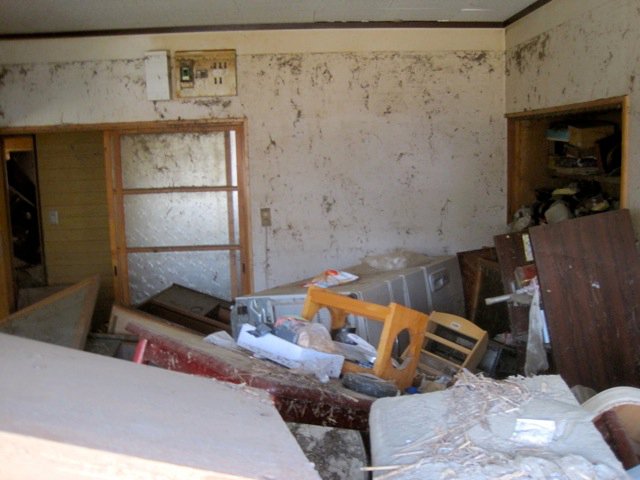 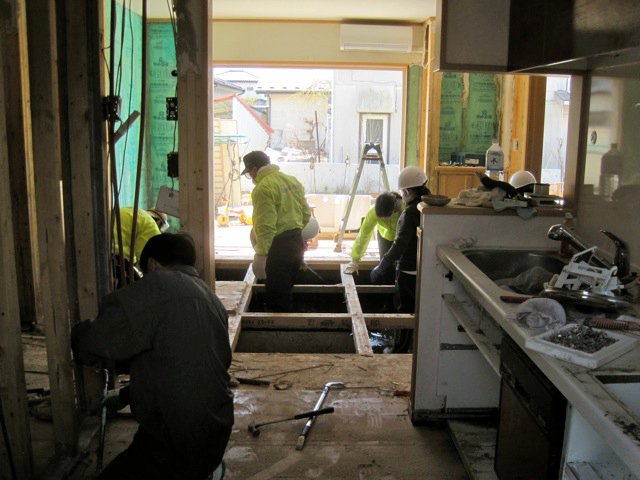 Slurping out the black acrid water from beneath the floor boards 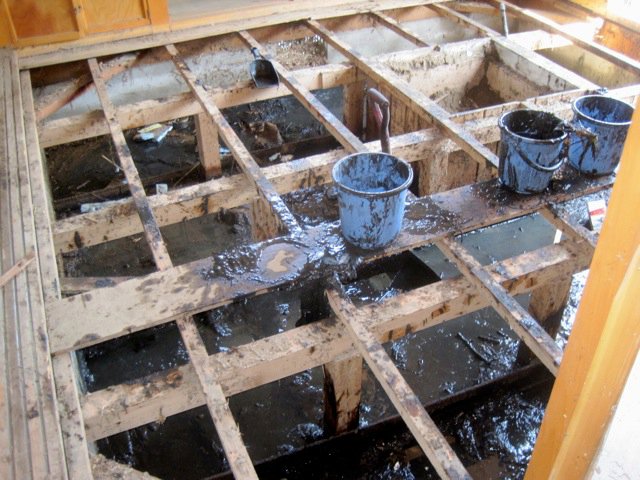 Someone's life drying in the sun 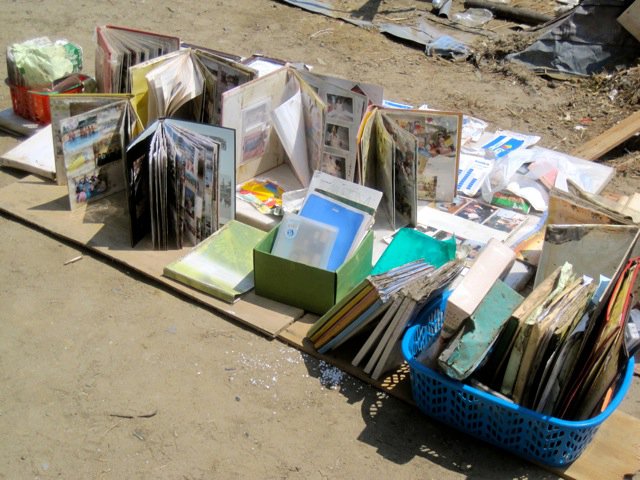 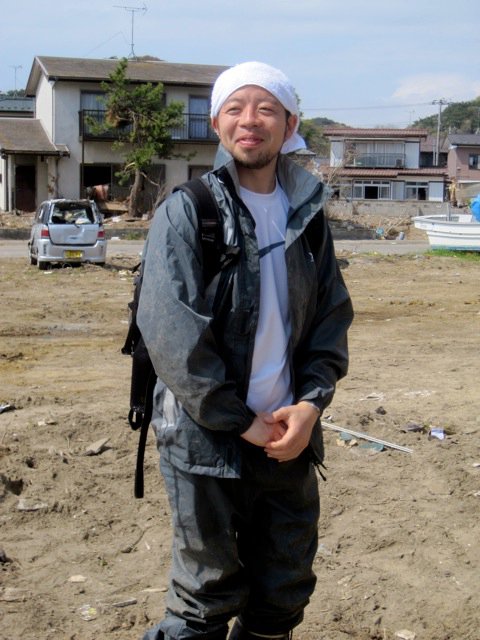 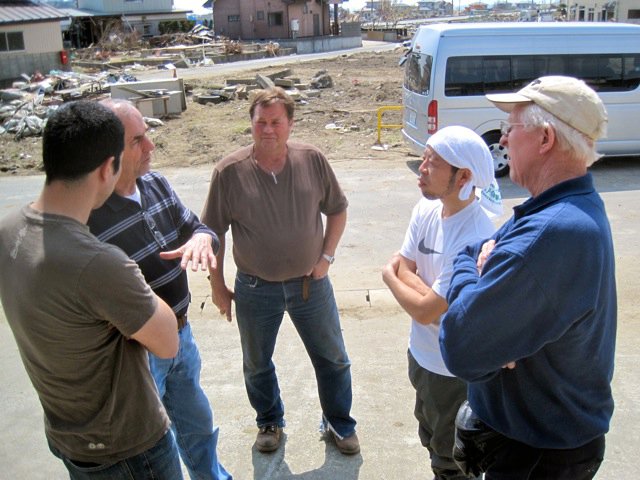 Luke Cummings with his wife and dad 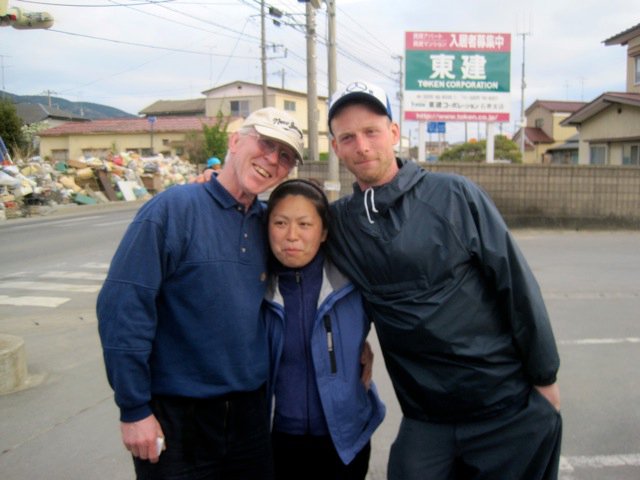 Finally cleaned out and drying 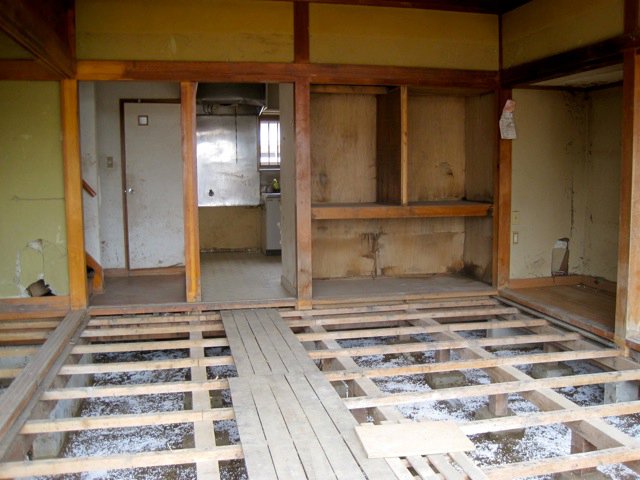 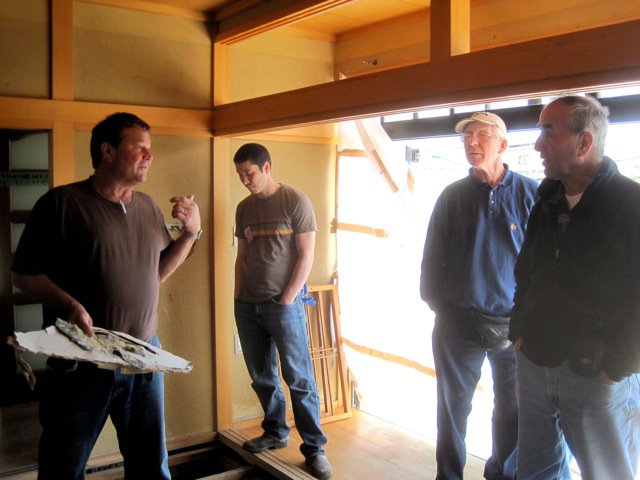 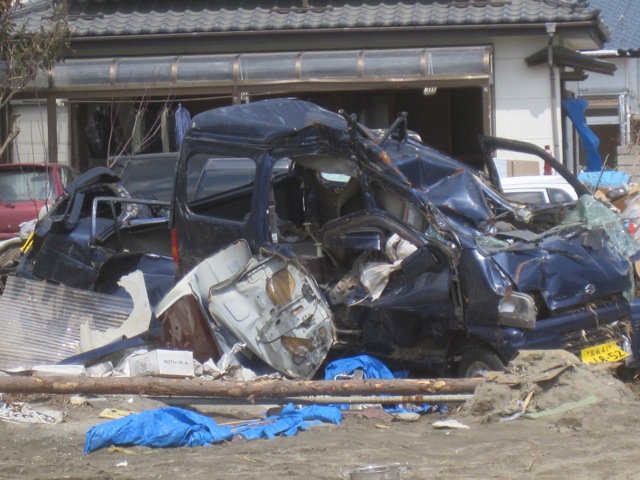 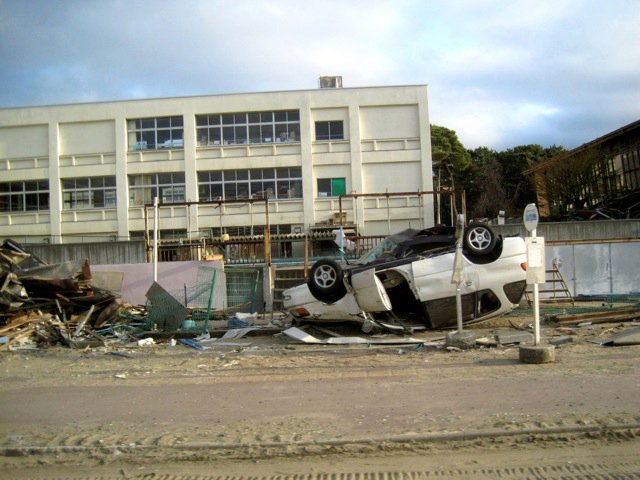 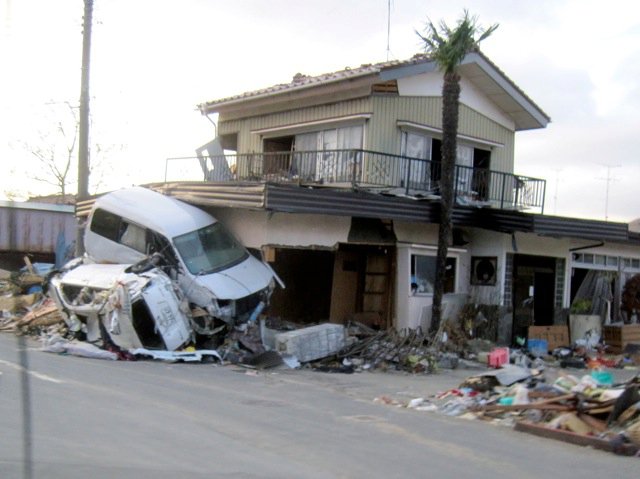 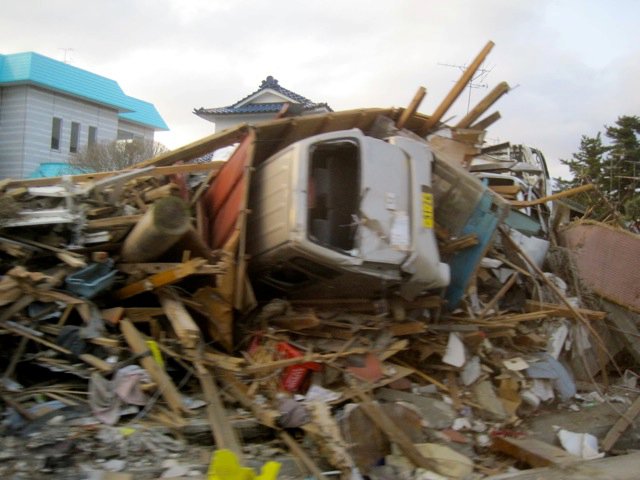 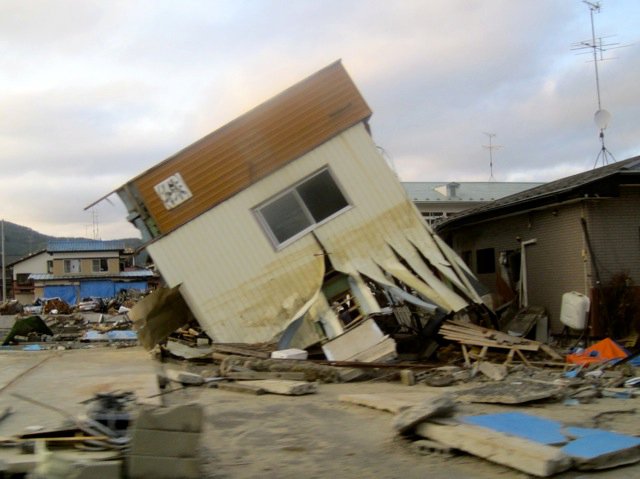 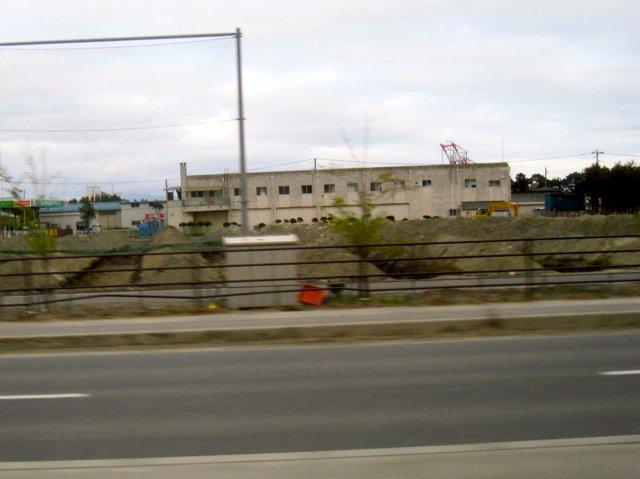