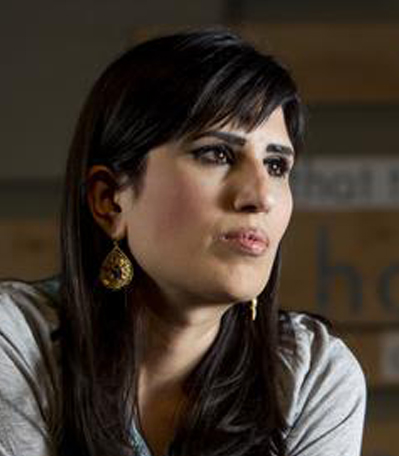 From the moment that I became a follower of Christ as a child, my life was centered around God. As an adult, I experienced incredible darkness in an abusive marriage, but God has always proved faithful. He has delivered me.

My family moved from Iran to San Jose, California, in 1986 due to the war in Iran. We were Muslims. As a result of what I witnessed in Iran, I had many questions about God and why God would allow so much suffering. My Muslim family did not know who Jesus was. Soon after we entered America, I was told of Jesus and his great sacrifice. I learned that Jesus had died on the cross so that I could have eternal life. Having heard of such a great love of God, I could not hold my own love back (1 John 4:19), and Jesus made me his follower at the age of nine.

Soon after conversion, I was given a Bible, but my parents took it away from me. My father was so angry about my conversion that he considered moving us back to Iran and back into the dangerous war zone because, he said, becoming a Christian was worse than dying in the war. In God’s providence, we ended up staying in the United States and my parents started reading the Bible that they had taken away from me. A decade later, they both became followers of Christ. Praise God!

In high school, Jesus was all that I could think of. Partying or dating did not interest me. Every free moment that I had was spent on my knees praying for my parents’ salvation, but at the same time I could not wait to leave home and go to college in order to be able to freely read the Bible and go to church. My college years were spent in Bible studies, evangelizing on campus, and going to church whenever possible. I was a pre-med major and planned to become a missionary doctor, but in my last year of college I sensed God calling me to go back to Iran to share the gospel.

Ever since I was a young girl, I had believed that the solution to the conflict in the Middle East was the gospel of Jesus Christ. So, soon after September 11, 2001, while other people were canceling their flights and there were rumors of war in the Middle East, I booked a flight to Iran. After arriving, I began sharing the gospel with family members and relatives. A few of them became followers of Christ. That was a cause for rejoicing!

The Beginning of Abuse

In Iran in 2002, I met a very charismatic man who seemed to have the same passion for Jesus and evangelism that I did. How wrong I was! Having never dated, I was naïve, and my emotions were easily manipulated. Though I was guarded from the outside world, I did not anticipate the deception and manipulation that could come from inside the church, where I felt safe and where I easily accepted anyone who called themselves a Christian. It was not until years later that I learned many might claim to be Christians but not know Christ (Matt. 7:21–23).

Almost from the moment I met my husband, his abuse started. At first it was subtle and hard to pinpoint. He began questioning my relationships with my parents, siblings, and friends. Over time, he isolated me from everyone I knew, until my relationship with him was the only relationship I had. The belittling was especially subtle. It started with criticism of my looks and the way I dressed. Soon I began questioning my own judgment and started relying on my husband as the head of the family for every decision. Uncritically, I assumed that submitting to my husband was what a godly wife was supposed to do. Not surprisingly, he was soon controlling everything.

In the first year of our marriage, 2005, the beating started. We had just fled Iran due to intensified persecution and landed in a nearby country. Arriving late at night at an apartment, I was exhausted. Scrambling through my suitcase for my nightgown, I was making a mess. My husband looked at me with anger and pointed out the mess that I was making. I said something like “who cares,” and before I knew it, I was being kicked and punched all over my body. Afterward, I was black and blue with huge bumps on my head. I was at that time pregnant with our daughter.

A Twisted View of Marriage and of God

My husband was the only man I had ever been with, and I took my marriage vows seriously. I believed strongly that God hated divorce and, with a child coming into the world, I saw myself bound to my marriage for life. After that beating, I walked around on eggshells, knowing what he was capable of. In this way, my husband achieved what he wanted: complete control over me. I was bound up in fear and in emotional and social captivity. Subsequently there were a few near-beatings, but I knew better than to resist and submitted before it got worse. As the years progressed, his violence included my parents, my pet, and objects around the house.

From the beginning of our marriage, my husband was often absent. He was restless and did not like staying around for very long. The times he was around were dark and filled with abuse, so it was a relief when he would leave. He claimed he needed to travel to do ministry. Later, I learned that those trips were filled with partying, porn, and womanizing. While he was gone, I stayed behind and worked, as the sole provider for our family. I was even responsible for funding his trips. My husband believed that he was a “Levi” and should only do ministry.

I had become a slave in our marriage, feeling that life was being sucked out of me. I was like a dead person walking. When my husband was home, I was afraid to show any emotion. If I cried, he told me that I was trying to manipulate him with my tears. If I showed concern about his behavior, he told me that I was being angry. He treated even laughter harshly.

Before my marriage, I had a thriving relationship with Jesus. Having come boldly to Iran, by the grace of God, I had not denied the name of Christ even when guns were pointed to my head and I was told to deny him. Yet at this point, eight years into my marriage, I barely read the Bible anymore. I barely prayed, because I had a wrong understanding of God. I believed that God required this kind of marital submission from me and that he prioritized the institution of marriage over the safety and well-being of the wife and children. I could not pray to that kind of a God. He seemed so similar to the god of Islam that I had come away from. What drew me to Christ when I was a Muslim was his great love and kindness to me, yet because of the marital abuse I endured through the misrepresentation of Christ, my view of God had become twisted.

In summer 2012, my husband traveled to Iran. I called him one night from our home in the United States only to discover that he was with another woman. For the longest time, I had closed my eyes to the possibility of adultery in our relationship. I was devastated. I cried out to God and questioned why he would allow this pain in my marriage for the rest of my life. Soon after that prayer, my husband was arrested and put in prison in Iran.

I did not see the imprisonment as an answer to prayer but only as another painful trial that I had to endure. I began three and a half years of advocacy to get my husband out of prison, including speaking three times before Congress and meeting with high government officials. Our story received national attention. Then-President Obama even flew to my city and met with me.

During this time, I prayed much and began reading the Bible again seriously. The more I read the Bible, the more I rediscovered God’s great love for me and my identity as his beloved child. I also began to realize just how much I feared divorce—I feared that it would mean that I was damaged goods and useless in the hands of God.

After years of imprisonment, my husband gained access to a smartphone in prison and began contacting me. Through this communication, I realized that he had not changed for the better. Instead, he had become even more abusive and paranoid. He accused me of stealing his fame through my advocating for his release. He saw me as his enemy. When he was released from prison in 2016, I asked him to repent of his abuse and adultery, but he refused and divorced me instead. What had been my worst fear—being divorced—was God setting me free!

God set me free in order to serve him and has enabled me to put my focus back on him and teach my two children to do the same. Since then, God has blessed me and the children with true joy and peace. My children are flourishing and growing in their faith, and God has enabled me to rededicate my life to Christ. May all praise, glory, and thanksgiving be to him for his abundant love and mercy to me in Christ.

The author is a member of Calvary Boise Church (Calvary Chapel) and director of the Tahrir Alnisa Foundation. Photo courtesy of The Idaho Statesman. New Horizons, January 2021.