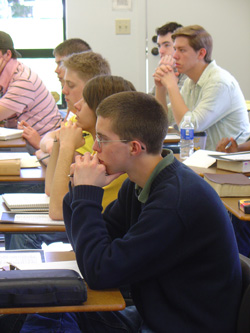 Home Missions general secretary Ross Graham asked me nearly two years ago, "Did you know that nearly half of the ministers in the OPC are over the age of fifty-five?" I confessed that I didn't, but I quickly caught his point. The Committee on Christian Education, through its Subcommittee on Ministerial Training (SMT), needed to alert Orthodox Presbyterian congregations to this fact, so that they might pray that the Lord would raise up the next generation of its ministers.

It was also apparent, however, that the SMT needed to assist OP churches in identifying and encouraging young men with apparent gifts for the gospel ministry. SMT member David VanDrunen suggested that one way to help churches and young men alike would be to host a conference introducing the pastoral ministry. The SMT quickly agreed and determined to hold an "OPC Timothy Conference" for young men aged 15–23. The conference was so named because Paul had exhorted Timothy to "fan into flame the gift of God, which is in you" (2 Tim. 1:6) and to "guard the good deposit entrusted to you" (2 Tim. 1:14). Paul also said, "What you have heard from me ... entrust to faithful men who will be able to teach others also" (2 Tim. 2:2).

The SMT sent brochures announcing the conference to every OP church and session in November 2007. The churches, through their sessions, were asked to seek out and recommend young men for the conference to the SMT. Having heard an encouraging word from their sessions, those young men who were agreeable were invited to participate in the conference, where they would be challenged to consider pursuing a call to the gospel ministry. OP ministers Mark Schroeder, Roger Wagner, David VanDrunen, Bryan Estelle, and I were invited to speak to the participants on topics related to the pastoral ministry.

Plans were then made to host ten young men who had been recommended by their session to attend the conference at a willing Reformed seminary (Westminster Seminary California) that had OP congregations nearby (Escondido OPC and Harvest OPC, Vista) that could help with meals and hospitality.

The SMT was overwhelmed with the positive response. Instead of receiving ten applications, the SMT received thirty-six! Not wanting to turn away applicants, the SMT quickly arranged for the conference to be split into two conferences. One session would be held on April 10–11 for fourteen high school students, and another was scheduled for April 24–25 for sixteen college-aged students. Six applicants were encouraged to attend in the future.

The Conference for High School Students

Despite the fact that American Airlines cancelled over a thousand flights on Wednesday, April 9, SMT member David Winslow and his wife, Susan, worked tirelessly through the day and night to ensure that every young man arrived in Escondido on time for the conference for high school students. 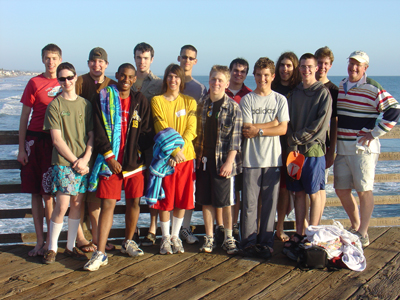 The next morning the conference began with prayer, introductions, and attending chapel at Westminster Seminary California. Mark Schroeder then spoke to the young men on the call to the ministry. He stressed that the desire must be God-given, which expresses itself in godliness and a love of Christ discernible to the church. The external recognition must then come from sober self-assessment and prayer and the acknowledgment of the church. David VanDrunen followed with a lecture on seminary education. He explained the theological disciplines that make up a seminary education and the hard work involved. Roger Wagner then addressed the young men on preparing for the ministry now, highlighting from 1 Timothy the self-control, gentleness, leadership, and prayer necessary for the man who desires to preach the gospel.

What happened after each address was a great encouragement to every adult involved in the conference. The young men asked question after question, and even after dismissal would encircle the speaker, talking about the ministry. They wanted to learn, and they were eager to glean the knowledge of their fathers in the faith. And they were pleasantly surprised to learn that they were not alone in their interest in the faith. Isaiah Thorn reflected, "Meeting all these young men with the same ideas and questions was a profound experience."

The conference shifted to fellowship as the young men boarded two vans to enjoy the beach and a rather brisk Pacific Ocean. Pastor Zach Keele (Escondido) gave surfing lessons (Mac Kern proved to be a natural), and a fierce game of ultimate Frisbee took place on the beach. After dinner on the pier, the men returned to their rooms for a time of prayer and discussion. Matt Walker spoke for many when he commented, "It was great to have time to hang out and talk with the other guys."

The next morning, Bryan Estelle spoke to the young men. He recalled how the Lord led him to the gospel ministry, and he exegeted Psalm 121. The talk convinced Ian Taylor that "although the path to the pastoral ministry requires a lot of work, its rewards are eternal, and its struggles are not in vain. As Dr. Estelle put it, 'Daunting is the task, but Christ is with you.' "

The young men then attended a New Testament interpretation class taught by OP minister Steve Baugh, and finished by hearing my talk on the process that leads toward ordination. The night was concluded with dinner and fellowship at the home of the VanDrunens.

The next morning the young men headed home. According to their testimony, the two days together had been memorable. "As I go home, one of the main things I'll take away from this is the seriousness of the pastorate, but also the great joy that goes with it that comes to those who are called," said John Paul Holloway. Russell York added, "I gained a deeper respect for those men who have followed a call into the ministry and dedicated themselves to guarding the body of Christ."

The Conference for College Students

When the sixteen men aged 18–23 met on April 24–25, the speakers delivered the same lessons covering the full range of the gospel ministry. Meals were provided by Harvest OPC in Vista, California, and the Joel Enas family opened their home for hospitality. 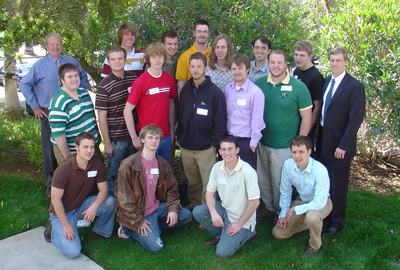 Having heard the talks, many echoed the comments of David Kuhfuss, "Before the conference, I only had an understanding of the preaching aspect, but now I realize there is so much more to being a minister of the Word than preaching."

Others, like Michael Lynch, saw the conference as reinforcing ministry and service in the church. Michael said, "Even though previous to coming to the conference I had already been heading toward ministerial training, this conference gave me a renewed desire to serve God's people through the preaching of the Word." Rob Barker added that he would "definitely like to find more opportunities to serve my local church, as well as receive more immediate mentoring and discipleship."

The most commonly heard feedback, however, was the joy in simply meeting others of the same age who loved the Lord and his church. "It was inestimably encouraging for me to spend almost two and a half days in the company of mature, godly young men," said Ian De Jong. Zachary Simmons declared, "It was a privilege to spend concentrated time with other young men asking the same questions and pursuing the same purpose. In fact, the time that I spent in discussion and prayer with my roommate, Charlie (Davis), was one of the blessings that stuck with me the most." Jonah Smith added, "It is always nice to spend time with people who share your faith. Seeing that other young men are interested in the ministry is encouraging."

As I have worked with seminarians in the OPC's Intern Program, I have long thought that the Lord has been gracious to us in raising up in our midst godly, Christ-centered young men. Respectful, attentive, and eager to learn about the gospel ministry, the thirty young men who attended the first OPC Timothy Conferences encouraged me even more.

There were some young men that I already knew, such as Nathaniel Archer, whom I have watched grow up, although sometimes at a distance. Hearing him speak about the brethren he loves at his home church and his desire to learn Greek and Hebrew, and watching him be a servant to others at the conference, did more than put a smile on my face. It made me thankful for God's covenant faithfulness to his church.

There were other young men that I met for the first time, such as sixteen-year-old Ryan Salyards. Ryan was honest about coming, saying, "I decided to attend because I figured that the conference would do me no harm." By the time he left, he said, "What was made clear to me was the role and importance of good, godly ministers."

Ryan attended the conference with an injured ankle (from pole-vaunting), but he heartily participated in every activity. Inside the San Diego airport, as we waited to board a delayed flight to Philadelphia, Ryan hobbled over to me and asked if I would look at the persuasive paper that he was writing. The paper sought to persuade his classmates at his high school in central Pennsylvania that Jesus Christ was Savior and Lord and that life was to be lived for him. After rearranging some paragraphs and giving him some hints for the oral delivery, I told Ryan that the paper had promise and that he was on the right track. It was similar to a thought that has recurred to me since the first OPC Timothy Conferences: the OPC has been blessed by God with some young men who show great promise, who speak openly about the Savior they love, and who have a strong desire to serve him and his church.

The author is the general secretary for the Committee on Christian Education. Reprinted from New Horizons, June 2008.