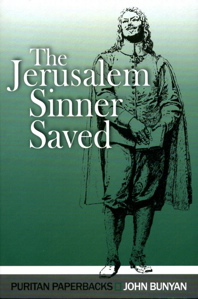 "I have been vile myself, but I have obtained mercy; and I would have my companions in sin partake of mercy too: and therefore, I have writ this little book." Thus wrote John Bunyan about this unique gem. The Jerusalem Sinner Saved is a book based, in typical Puritan style, upon a portion of a single text: Luke 24:47. Jesus, as the text tells us, told his apostles to begin proclaiming repentance and forgiveness of sins in his name to all nations "beginning at Jerusalem."

The premise of this book is that Jesus wanted his disciples to proclaim the gospel to the worst of sinners - those in Jerusalem who crucified their Messiah. To Bunyan's mind, this was the worst possible sin. The apostles were to begin there, with these worst of sinners, because, in Christ's eyes, they had the greatest need. Also, when they believed in Christ, his name would receive the greatest fame, and thus others would be encouraged to come to Christ. The kingdom of Satan would then be weakened, and the tempted and the weak would be helped. Further, the greatest sinners would love Christ the most when saved, and those who refused to repent would be left with no excuse. To Bunyan's way of thinking, this command to preach the gospel to "Jerusalem sinners" shows the gracious intentions of Christ toward men and his sufficiency to save the worst of sinners, and gives encouragement to those who think that their sin is too great to be forgiven.

Bunyan's argument is tight and careful, as are most books by Puritan authors. That means you have to gird up the loins of your mind and think as you read. The reader must meditate carefully and keep the whole of the book in mind as each part is read. That said, it is not a hard book to read at all, and could be read by anyone from age ten upward with profit.

All in all, this is an encouraging book for those who feel guilty about their sins. It is a wonderful reminder that Christ's grace to his people knows no bounds and that his power to save even the worst sinner is not limited. Read this book in order to be encouraged in your own walk with Christ and in your prayers for sinners to be saved.