He Came Down from Heaven: The Preexistence of Christ and the Christian Faith 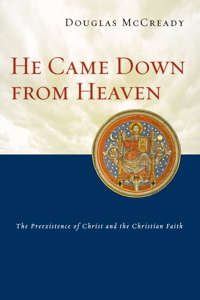 He Came Down from Heaven: The Preexistence of Christ and the Christian Faith

He Came Down from Heaven: The Preexistence of Christ and the Christian Faith, by Douglas McCready. Published by InterVarsity Press. Paperback, 2005. 348 pages, list price $26.00. Reviewed by Jeffrey C. Waddington, doctoral student.

That the Son of God preexisted the Incarnation would seem to be a hard datum of the Scriptures. Like so many other seemingly obvious doctrines of the Christian faith, this one has also been the object of criticism. Douglas McCready offers in He Came Down from Heaven a helpful rejoinder to such skepticism.

He Came Down from Heaven is a powerful refutation of critical rejections of the doctrine of Christ's preexistence. It is also, and perhaps more importantly, a thorough study of the New Testament passages that serve as the foundation of the doctrine. McCready also delves into the Jewish and Hellenistic background of the texts in question.

The doctrine of the preexistence of Christ teaches that the eternal Son of God, the second person of the Holy Trinity, became incarnate in the person of Jesus Christ, who was truly and properly God and truly and properly man. This is the teaching of Scripture, and without this doctrine the plan of redemption would be jeopardized.

An important question is whether Christ's deity is a matter of his being or his function. As McCready helpfully notes, Christ could not have fulfilled the function or role of Son of God without being the Son of God.

McCready has written from a Reformed perspective. If there were any improvement that this reviewer could suggest, it would be that a discussion of the so-called extra Calvinisticum (the doctrine that Christ's deity is not contained by his finite human body, but rather extends infinitely beyond it) could have strengthened his argument. Nevertheless, McCready has offered a signal service to the church with this book. It is accessible to scholars, pastors, and interested laymen. The diligence effort required to read this book will be more than repaid.