A Secular Faith: Why Christianity Favors the Separation of Church and State 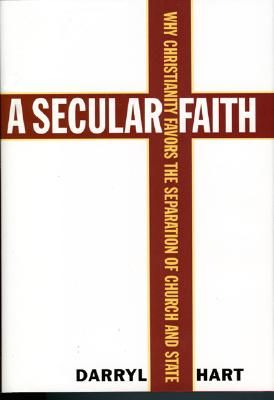 A Secular Faith: Why Christianity Favors the Separation of Church and State

In A Secular Faith, Darryl Hart argues that Christianity is an essentially apolitical faith, concerned foremost with spiritual and eternal affairs. He demonstrates (primarily from within American Protestantism) that attempts to enlist Christianity into the service of politics misconstrue basic Christian doctrines. For him, Christian faith is secular, that is, impermanent, temporal, and provisional.

Hart shows how colonial hopes in the New World for resurrecting Christendom helped motivate the American Founders, fueled Lincoln's Unionist impulse, and still survive today. This contrasts, Hart says, with Luther's and Calvin's spiritual interpretation of the "city on a hill" metaphor and also with Augustine's heavenly "city of God." Neither can be built within earthly politics.

Additionally, Christian republicanism (i. e., the view that civil liberties need Protestantism to flourish and vice versa) became part of the fabric of American culture throughout westward expansion in the nineteenth century and during the struggle against communism and fascism in the twentieth century, without carefully articulating the connections between religious teaching and political liberty. Hart maps the terrain which distances Christian liberty, traditionally understood as "freedom from sin" and confessionally as "freedom to worship God," from contemporary notions of liberty as "public affirmation of religious faith" or "government sanction of religious expression."

His discussion of nineteenth-century debates on educational reform is fascinating. In short, the need for a common civic morality required that Christianity be stripped of its dogmatic content to make it palatable for public consumption. This contradicted, Hart says, Protestant beliefs about the third use of the law and seeing good works (morals) as a product of divine grace.

In similar fashion, Hart analyzes American notions of "a nation under God," the compatibility of Protestant theology with American democratic theory, the extent to which religion has transitioned from a private affair to a public profession in political life, and the development of mainline Protestant ecumenicism - along with evangelical responses - as driven more by national interest than by common theology. Happily, Hart gives significant treatment to Dutch Calvinist and Orthodox Presbyterian interaction with these issues. His analysis is current up to George W. Bush's Office of Faith-Based and Community Initiatives.

According to Hart, Christianity as a secular faith favors the separation of church and state because, like Daniel in Babylon - who was politically situated, culturally astute, and versed in Chaldean wisdom, but refused to compromise his religious commitments for political expedience and did not try to reform Babylon into a Jewish theocracy - such a faith promotes biblical fidelity by allowing Christians to pursue their worldly vocations to the glory of God without reducing the church to an extension of the state by coopting the exclusive claims of Christian supernaturalism into moral imperatives from either side of the political aisle.

Hart's historical analysis is broad but nuanced. His theological argument is confessionally straightforward. Without footnotes, his book is written for a broad audience (as evidenced by positive reviews and nods in The Weekly Standard and The New Republic). Still, some may wish Hart had included footnotes.

In an age when Presbyterian general assemblies petition the President of the United States regarding U.S. military policy (OPC) and denominational heads speak out against presidential tax proposals (PCUSA et al.), I hope many people will read this book and take more seriously the political implications of Jesus' claim that his kingdom is not of this world. Since Hart meets his stated goal of trying "to complicate contemporary understandings of the relationship between Christianity and liberal democracy in the United States," perhaps people should do as I had to do: read it twice. Darryl Hart has written a brilliant book.