B. B. Warfield: Essays on His Life and Thought 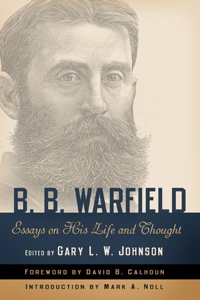 B. B. Warfield: Essays on His Life and Thought

Benjamin Breckinridge Warfield (1851-1921) was a brilliant and eloquent theologian and a staunch defender of the inerrancy of Scripture at "Old Princeton" (Princeton Seminary before its reorganization in 1929 to bring in liberal professors). He was also the revered mentor of J. Gresham Machen, who played the key role in establishing Westminster Seminary in 1929 and the Orthodox Presbyterian Church in 1936. Gary Johnson has brought together a valuable collection of essays on Warfield's life and thought, and anyone interested in American Presbyterian history should read them.

After a foreword by David B. Calhoun and an introduction by Mark A. Noll, Bradley J. Gundlach leads off with "B. Is for Breckinridge," an account of Warfield's fiery grandfather and other notable maternal kin.

In "A 'Rather Bald' Rationalist?" Paul Kjoss Helseth argues that Warfield's appeal to "right reason" on behalf of Christianity was not an appeal to natural reason, but an effort to establish proper grounds upon which the Holy Spirit could build faith in the soul.

Next, Moises Silva's article entitled "Old Princeton, Westminster, and Inerrancy" is reproduced from the Westminster Theological Journal (1988). Silva finds "hermeneutical flexibility" in Warfield and others in the Princeton-Westminster line, perhaps more than there really was.

Raymond D. Cannata, in "Warfield and the Doctrine of Scripture," surveys criticism of Warfield's understanding of Scripture and then tries to explain and defend Warfield.

Paul Kjoss Helseth examines how Warfield integrated faith and learning in "Warfield on the Life of the Mind and the Apologetic Nature of Christian Scholarship."

Stephen J. Nichols, in "'The Vital Processes of Controversy': Warfield, Machen, and Fundamentalism," examines the similarities and connections between Warfield and Machen as they engaged fundamentalism and battled liberalism.

In "Warfield and C. A. Briggs: Their Polemics and Legacy," Gary L. W. Johnson examines the scornful polemics of Briggs (a professor at Union Seminary in New York), aimed principally at Warfield and other Princetonian advocates of the inerrancy of Scripture and confessionalism, and the more gentlemanly, yet relentless, polemics of Warfield, aimed at anyone who would dilute confessional Calvinism (whether liberals or fundamentalists). He then shows how widely Briggsian views are promoted today in professedly evangelical and Reformed circles, even by a professor at Westminster Seminary, Peter Enns (pp. 224-34). Noting that Enns claims to be in the Old Princeton tradition, Johnson comments: "Briggs would have doubled over with laughter. Warfield would not have been amused" (pp. 232-33).

Finally, in "Warfield and the Briggs Trial: A Bibliography," Barry Waugh summarizes the Briggs heresy trial and lists (with annotations) the materials pertaining to it that were collected by Warfield in four volumes and are housed in the Luce Archives at Princeton Seminary.