Scripture and Worship: Biblical Interpretation and the Directory for Worship 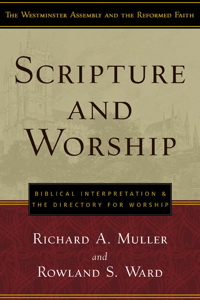 Scripture and Worship: Biblical Interpretation and the Directory for Worship

With this title, P&R Publishing rolls off another in its series of studies on the Westminster Assembly and the Reformed Faith.

In a series of thoughtful essays, this book discusses two separate topics: Scripture and worship (but not the relationship between the two). The opening four chapters are Muller’s. The first introduces his hypothesis that a relationship exists between the Westminster Confession of Faith and the English Annotations, a condensed, multiauthored commentary on the Bible. Muller notes that the Westminster assembly neither commissioned nor dominated the production of the commentary, but he suggests that the biblical interpretation of the commentary illustrates the exegesis behind the Confession. The second chapter is an attractive expansion on the preface to the Annotations, a narrative rather than an analysis.

The meat of Muller’s contribution is found in chapters 3 and 4. They present an in-depth commentary on portions of chapters 1 and 3 of the Confession, using the Annotations to deepen our understanding of the Assembly’s doctrines of Scripture and divine election. The study argues that the Scripture texts appended to the Confession by the Assembly are primary interpretive guides for understanding the meaning of the Confession. Of course, this requires using the correct text of the Confession, but Muller does not specify which edition he uses. Happily, he makes only one error with respect to the proof texts of the Assembly (on p. 61), and that does not affect his main argument.

Muller’s study as a whole is a useful one. Nonetheless, it makes some errors about the operations of the Assembly, and its biographical sources are dated. I find some of its suggestions implausible (e.g., that the Assembly’s reference to “ordinary means” refers to preaching, prayer, and the sacraments, but not to commentaries such as the Annotations). And the relationship between the Assembly and the Annotations is a little more complex than Muller allows (the Assembly discussed and defended the Annotations on four separate occasions in September 1645). But his basic premise that we should interpret the Confession in the light of its proof texts, and that the proof texts are pointers to an exegetical tradition, while not novel, is certainly important.

Ward’s two chapters strike a more militant tone, and begin by chastening the public for their ignorant assumptions about the Assembly - a now commonplace introduction for lectures and studies about the gathering. He then takes up the hammer that Muller usually wields and batters away at the Calvin-versus-Calvinist arguments that continue to encrust otherwise attractive post Reformation research. On the whole, Ward’s historical treatment of the Directory for Public Worship is helpful and careful, and the center of his conclusion will hold: that “there is no fundamental difference between Calvin and the Westminster on worship” (p. l06). At the same time, as earlier pages suggest, there was a range of views on worship among the Westminster divines, and so Ward’s conclusion could be stated more precisely. All of the Congregationalists and some of the Presbyterians were opposed to set forms in worship (such as a fixed liturgy or use of the Apostles’ Creed). But many of the Presbyterians were comfortable with such forms, finding themselves more in line with Calvin’s worship in Geneva and its exported equivalent in Scotland.

In his two chapters, Ward makes a positive argument for worshiping like the Assembly directed. He sees their Directory as immediately useful for the church today, and he is right in thinking that much could be gleaned from it that would benefit modern Presbyterian worship.

I recommend the book to those interested in reflecting on the relationship between the Confession and Scripture, and for people wanting an introduction to the Directory for Public Worship (appended at the rear of the book). The indexes are excellent, save that they do not index persons mentioned in the footnotes, a real shortcoming in a book without a bibliography.