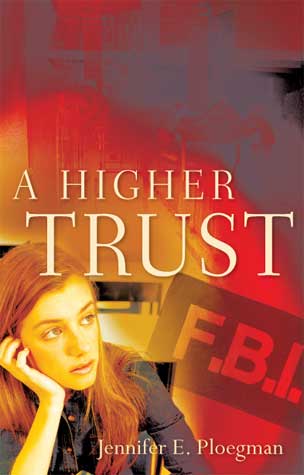 A book labeled "Christian fiction" is not generally expected to be good literature. In fact, few works of fiction by Christian authors have been reviewed in New Horizons in the past several years. However, Jennifer E. Ploegman, born and raised in the OPC and still a member of this denomination, has produced a book that should make us glad to call her our own. A Higher Trust is engaging, thought provoking, and built on the foundation of the Reformed faith—a refreshing contrast to many of the books that fill Christian bookstores today.

Main character Kelly Warner is a senior at a Christian high school, focused on her studies and respected by teachers and friends. Unexpectedly, she is caught up in a battle for truth: an intense fight against large-scale, white-collar persecution of Christian organizations such as her school. It is not the sort of battle most Christian teenagers are called to fight, but Kelly’s role is nevertheless believable.

FBI involvement makes the plot sufficiently suspenseful and action packed to hold the attention of readers in high school and beyond. Yet there is more to this novel than a fast-paced, exciting plot. As Kelly struggles to respond in a godly way to each new challenge, the themes of Romans 12 permeate her thinking. What must she give up in order to offer herself as a living sacrifice? What does it look like, practically speaking, to cling to what is good? How can she love her enemies and bless those who persecute her? When will her prayers be answered? Readers have the opportunity to evaluate Kelly’s responses and to imagine their own in similar situations—a worthwhile exercise in a land in which few of us face serious persecution for our faith.

Most importantly, Kelly’s fight for the truth is developed within the context of Reformed doctrine and practice. Without explicitly mentioning the Reformed faith, Ploegman has written a book that points readers toward biblical truths and priorities. There is an emphasis on the Word of God, not merely interpreted by individual believers, but studied by families and preached by pastors. The covenant community provides welcome support for Kelly, through regular worship and fellowship. And the doctrines of God’s sovereignty, sin and grace, and the perseverance of the saints are evident throughout the novel.

A Higher Trust is not a romance-driven, teenage adventure with a mushy message of faith and love. It is an exciting but serious look at the struggle between light and darkness, truth and lies. Both the plot and character development are founded upon a Reformed understanding of God’s Word and power. Although the book seems to lack something in terms of final editing and polishing, that does not diminish the overall effect of the story and message. Fiction by Christian authors convinced of the Reformed faith is a rarity; in A Higher Trust, Ploegman has built upon that foundation, producing an engaging and worthwhile novel.