The Divine Authenticity of Scripture: Retrieving an Evangelical Heritage 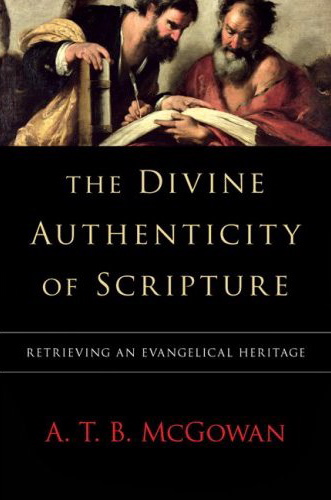 The Divine Authenticity of Scripture: Retrieving an Evangelical Heritage

Andrew McGowan is the principal of Highland Theological College in Dingwall, Scotland. In this book, he seeks to reconstruct the doctrine of Scripture. He wants to nudge us away from a strictly "inerrantist" position and embrace a less rigid "infallibilist" view.

McGowan then argues that it would be better to speak of "divine spiration," rather than "inspiration," since the latter term is subject to misunderstanding. But the solution is to explain what inspiration means in this context, not to confuse people with obscure terms like spiration.

The heart of his book is a critique of biblical inerrancy and the recommendation of an "infallibilist" view that allows for minor discrepancies and difficulties (he doesn't want to say "errors") here and there in Scripture. We should not waste our time defending some hypothetically inerrant autographs, now lost, he argues. Instead, we should be glad that God infallibly achieves the purposes for which he divinely spirated (ouch) less than perfect men to write a Bible that we can trust as authentically from God.

The main problem with this view is that it fails to do justice to Scripture as the word of God. The Bible states many times that our all-knowing, completely truthful, and unchanging God has, in effect (through inspiration), spoken the very words of Scripture. Having been authored by God, the original text of Scripture must be infallible ("unable to err") and therefore is inerrant ("without error"). To allow for errors in the original text is to deny that it is actually the word of God.

There is no need to get hung up on the fact that the autographs have disappeared. Our Bibles are the word of God to the extent that they are accurate copies or translations of the original text—and to a remarkable extent they are. When we say that only the autographs are perfectly inerrant, all we are saying is that any errors introduced by copyists or translators cannot be attributed to the Author.

It should be noted that McGowan misrepresents Abraham Kuyper and Herman Bavinck as denying inerrancy.

McGowan's final chapters on "Scripture and confession" and "Preaching Scripture" (a look at Calvin's preaching) are well worth reading, but somewhat tangential.

McGowan gets about as close to being an inerrantist as one can without actually being one. Nonetheless, the allowance of even "minor" errors in the Bible undermines its divine authenticity. Unfortunately, McGowan's view opens the door to much broader denials of biblical veracity.