With Heart and Mouth: An Exposition of the Belgic Confession 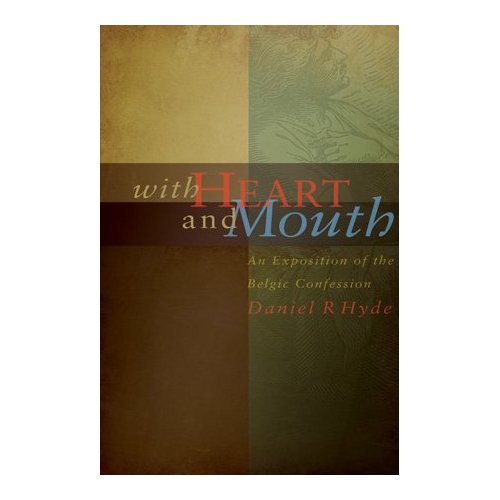 With Heart and Mouth: An Exposition of the Belgic Confession

With Heart and Mouth: An Exposition of the Belgic Confession, by Daniel R. Hyde. Published by Reformed Fellowship, 2008. Hardback, 560 pages, list price $24.00. Reviewed by OP pastor G. I. Williamson.

If there is anything in the English language comparable to this, I haven’t seen it. It is a fine commentary on the great truths articulated in the Belgic Confession. It also has several features that enhance its value.

This is not a line-by-line commentary on the text of the Confession. I think the reason for this is that the Belgic Confession is more rough hewn than fine tuned. Rev. Hyde therefore deals with the great principles so boldly stated in this confession, without focusing on each phrase.

The book begins with a chapter entitled "Events Surrounding the Writing of This Confession." This really helps the reader to understand the Confession better. The author’s impressive research adds significantly to the whole commentary.

As one who has served churches confessing the Three Forms of Unity (which include the Belgic Confession), as well as churches confessing the Westminster Standards, I have always seen them as harmonious. Reading this commentary has only increased that conviction. If there is anything that is not in harmony with the Westminster Standards, I am not aware of it. Even where there seems to be a significant difference at first sight, that proves to be an illusion. For example, the Belgic Confession (Art. 29) defines the true church and the false church in absolute terms. It also says, "These two churches are easily known and distinguished from each other." And they are—as concepts. But, as Hyde himself says, "When we speak of the marks of the church and have to draw lines, it is not easy" (p. 393). For precisely this reason, I was never able to apply Article 29 of the Belgic Confession except by keeping WCF 25.4–5 in mind along with it.

I found particularly encouraging Hyde’s discussion of Article 32. He rightly acknowledges that "what has come to be known as the regulative principle of worship" (p. 430) is clearly expressed in it. He also rightly defends the right of God’s people to resist the imposition of things that are not commanded in the sphere of worship (p. 432). He gives a number of examples of such things that are common in worship services today (p. 431).

Again and again, as I read this book, the advantages of the succinctness and precision of the Westminster Standards came to mind. But I was also reminded, again, of how much there is to learn from those who were the first to say it, and who said it with burning conviction, knowing that their very lives were on the line in doing so.

The Belgic Confession is a fine statement of our Reformed faith. And this is a fine book. I heartily recommend it.