Life in Christ: Union with Christ and Twofold Grace in Calvin’s Theology 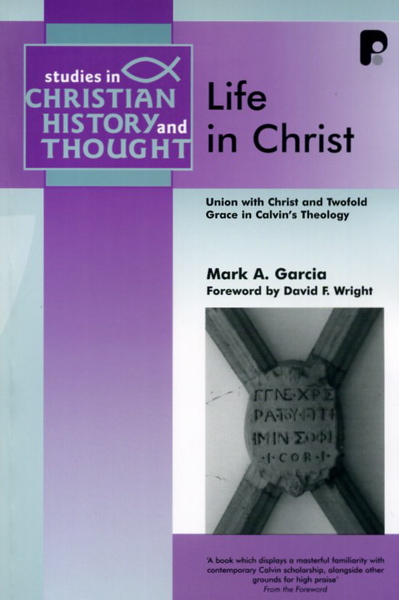 Life in Christ: Union with Christ and Twofold Grace in Calvin’s Theology

This book, which is a "light revision" of the author’s doctoral dissertation, examines Calvin's doctrine of union with Christ and its double benefit of justification and sanctification. In view of the contemporary Reformed debates regarding justification and its relation to good works, this volume will prove instructive as an examination of the soteriology of the leading theologian in the Reformed tradition.

Garcia examines three "case studies" in Calvin's writings that illustrate the fundamental importance of union with Christ for soteriology. The three cases are Calvin's commentary on Romans, his polemics with Lutheran theologians regarding sacramental union with Christ, and his dispute with the Lutheran theologian Osiander. Each case shows how Calvin develops his view that the believer's incorporation into Christ, which is effected by the Holy Spirit through faith, simultaneously grants free acceptance with God and sanctification of life in good works.

According to Garcia, Calvin's doctrine of union with Christ enables him to coordinate this double grace in a way that is distinct from the Lutheran tradition. Whereas in the Lutheran tradition, salvation tends to be reduced to the grace of justification, Calvin insists that the faith that appropriates Christ's righteousness for justification is always and necessarily an obedient faith. Moreover, contrary to the Lutheran tendency to view sanctification as a "fruit" or "effect" of justifying faith, Calvin regards union with Christ as the root of the believer’s sanctification.

Students of Calvin and the Reformation will find much of value in Garcia's study. Garcia demonstrates convincingly that Calvin avoids the errors of both moralism and antinomianism. Although believers who are united to Christ enjoy free justification upon the basis of Christ’s righteousness alone, which is received by faith alone, they are simultaneously and necessarily renewed after the image of Jesus Christ.