God in the Gallery: A Christian Embrace of Modern Art 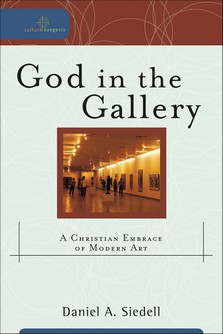 God in the Gallery: A Christian Embrace of Modern Art

In contemporary culture, the general populace holds a low view of modern art. Many Christians do not find modern art suitable as a vehicle to convey their beliefs.

Daniel Siedell challenges such thinking in God in the Gallery. The book is divided into seven essays that argue for a critical Christian reception of modern and contemporary art. The essays covering such topics as the contemplative element in twentieth-century abstraction and the nature of art criticism are engaging and insightful. The book, however, is most significant for its defense of the legitimacy of modern and contemporary art. Siedell takes on the populist demand that art be accessible to the average person. This might suggest painstaking realism, otherworldly light, or common symbolism. Artists working outside of these parameters find themselves labeled elitist, irrelevant, or even subversive.

Siedell's indictment of the populist approach begins with its assumption of a former golden age. He argues that appreciation of art before the Reformation was not automatic, but involved lifelong ecclesiastical participation. His argument then moves from the lesser to the greater: if pre-Reformation art required preparation from its illiterate audiences, then shouldn't modern and contemporary art expect more from its much more educated audiences?

For all of its strengths, God in the Gallery has a number of glaring weaknesses. First, the author has an overly optimistic view of the altar to the unknown god in Acts 17. What the apostle saw as an opportunity for evangelism, Siedell sees as an opportunity for shared truth. Second and more problematic are the author's liturgical assertions. Siedell feels that the icons of Eastern Orthodoxy offer an ecclesiastical point of contact with modern and contemporary art. Throughout the book, he endorses "Nicene Christianity" (i.e., the Second Council of Nicaea's approval of icons) and freely quotes Eastern Orthodox theologians on matters of theology. Unlike Paul, who used the Acts 17 altar to point his audience to Christ, Siedell seems to point his audience to visual icons as a means of grace. Admittedly, icons are powerful; it is their propriety that should be questioned. The lesson of the snake on the pole, a Christological image required by God but perverted by man, should lessen our confidence in such things (Num. 21:8–9; John 3:14–15; 2 Kings 18:4).

God in the Gallery is a stimulating, challenging, and at times infuriating book—at least from a Reformed perspective. I cautiously recommend this book to mature Christians who desire to broaden their understanding of modern and contemporary art and can tolerate a very different approach.