Dual Citizens: Worship and Life between the Already and the Not Yet 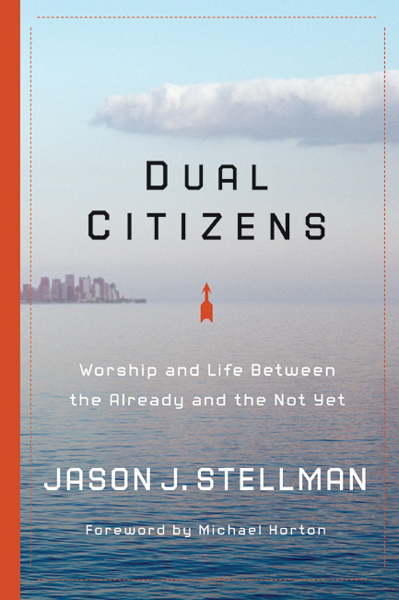 Dual Citizens: Worship and Life between the Already and the Not Yet

Dual Citizens: Worship and Life between the Already and the Not Yet, by Jason J. Stellman. Published by Reformation Trust Publishing (Ligonier Ministries), 2009. Hardback, 193 pages, list price $18.00. Reviewed by OP pastor David Inks.

"What is the relationship between cult and culture, the church and the world?" asks Jason Stellman, a PCA pastor (p. xviii). This question expresses the main topic of this book, and it also illustrates Stellman's imprecise use of terms. The book is intended to be a popular exposition of the cult-culture paradigm of Meredith Kline, and its popular orientation may account for Stellman's less than rigorous treatment of the subject.

The introduction to the book is the foundation for all that follows, and here Stellman lays out the fact that the Christian participates in two arenas: the kingdom of God, which has to do with the holy "cult," and the kingdom of man, which has to do with the profane "culture." Moving forward, he sets out a solid, if not tightly reasoned, justification for his thesis. In effect, Stellman gets us back to insights seen in Calvin's Institutes regarding the nature of the kingdom of God. He provides an old key for those who are imprisoned in the modern transformationist prison and are growing weary of the restorationist treadmill, under the burden of "taking culture captive for Christ."

The main criticism I have of the book is its loose use of undefined terms. "Cult-culture" is not equivalent to "church-world." Nor is either couplet the same as "Christianity-culture" (p. xix). These are specific terms, which express precise distinctions, yet they are loosely employed and confusingly multiplied, reducing the persuasiveness of the argument. This problem is evident in the discussion of the Amish, who have "renounced the world," which Stellman interprets to mean that cult and culture for them have "suffered a bitter divorce" (p. xviii). But the truth is that the Amish have rejected the non-Amish culture as "worldly," yet still have their own culture in "this world." This is not an example of bitter divorce between cult and culture, but rather of a sort of theocratic marriage, which leaves "the world" outside its boundaries, similar to Old Testament Israel. Equating "world" with "culture" hinders Stellman's assessment of Amish theology and dulls the sharp edge of his distinctions.

This weakness aside, Stellman does a good job developing his theme with creative wit and insightful exegesis. He usefully shows how Kline's paradigm helps us rightly evaluate contextualization, worldliness, piety, the centrality of the church, and its freedom from false standards of success imposed by "the culture." Dual Citizens helpfully elucidates the biblical foundations of a distinctive characteristic of the Orthodox Presbyterian Church: that we have "no cherished cultural agenda" because we are "a pilgrim people."