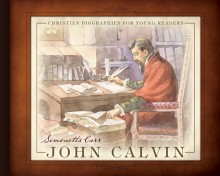 A book about John Calvin written to children is one accomplishment. A book about John Calvin that children actually understand and enjoy is unique. Simonetta Carr's biography of John Calvin is so enjoyable that I found myself happy to have him find love and sad to watch him die. Carr, a member of the United Reformed Church, is a former elementary school teacher, a homeschooler, and a writer. I found her book to be extremely user-friendly while reading it for background information for a middle school paper I recently wrote. This book isn't just a list of dry facts you can get from searching the Internet. Carr addresses covenant children directly. She tells you not only what John Calvin did, but also what it means to you as a young Reformed student or child. Even though it is recommended for children aged seven to ten, I still found it quite useful as a twelve-year-old.

Carr covers all aspects of John Calvin's life. She begins with his early studies in Noyon, France, moving on to his arrival in Basel and his eventual publication of the Institutes of the Christian Religion. Carr describes Calvin's arrival in Geneva, his sometimes difficult pastorate there, his years in Strasbourg, his response to Cardinal Sadoleto, and his return to Geneva. Carr devotes the last two chapters to Calvin's personal life, including his marriage to Idelette, his infant son's and wife's deaths, and his health problems. Carr writes about John Calvin's death in a nonscary way, but lets you understand the grief of the matter. After these seven chapters, there is an easy-to-read time line and a "Did you know?" section with interesting facts about common life in Calvin's day.

I especially liked the illustrations by Emanuele Taglietti. All drawings and photos have helpful captions, and they vary from a photo of Geneva Academy to a sketch of Francis I finding a poster in his bedroom condemning the Mass. Even the pages of this book have an olden-day look to them, with theme words in a faint washout behind the text. I believe it would be a good addition for any home, school, or church library. This is one book in an anticipated series (Augustine, Knox, Bunyan, and others), and I look forward to reading the rest.