Children at the Lord's Table? Assessing the Case for Paedocommunion 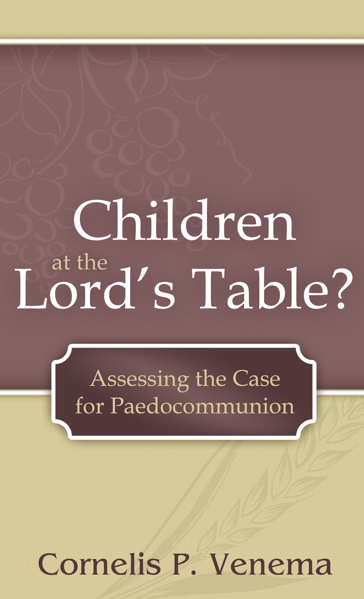 Children at the Lord's Table? Assessing the Case for Paedocommunion

Anything written by Cornelis P. Venema, the president and professor of doctrinal studies at Mid-America Reformed Seminary, is worthy of careful study, and this thorough examination of the question whether baptized children should be admitted to the Lord's Table is no exception.

Most advocates of paedocommunion argue that the inclusion of children in the covenant of grace warrants their reception of the Communion elements, just as they receive the water of baptism. The traditional Presbyterian and Reformed practice has been to limit active participation in the Lord's Supper to those who have made a public profession of faith.

The question of infant (or child) communion, like the question of infant baptism, is difficult because it is not addressed directly in Scripture. Certain passages (notably 1 Cor. 11:27–29) do seem to speak indirectly to the question, but it is best approached from broad theological perspectives. Accordingly, Venema does just that before examining 1 Corinthians 11:17–34 in detail.

His chapter on church history shows how the church has struggled with this issue throughout her history, with paedocommunion prevailing in the East, but not in the West (including Protestants). The chapter on the Reformed confessions shows how our theological heritage (especially the understanding of the Lord's Supper as the nourishment of faith) is inconsistent with paedocommunion.

Venema's examination of Old Testament ritual meals shows that the situation was much more complex under Mosaic law than advocates of paedocommunion suppose, and does not support their claim that children were full participants then (and thus presumably should be now)—even granting that the Passover was analogous to the Lord's Supper.

Turning to the New Testament, Venema argues that the passages pertaining to the Lord's Supper (or relevant to it: John 6), including the accounts of its institution, presuppose that the Supper is for believers. The key passage is 1 Corinthians 11:17–34, which forbids people to participate "unworthily" (vs. 27), not "discerning the body" (vs. 29), and requires that they "examine" themselves first (vs. 28). Venema argues strongly that the self-examination and discernment (of Christ's body in the sacrament, not of the church as Christ's body) required of communicants presupposes understanding of the sacrament and a public confession of faith. The key point is that the requirements listed by Paul pertain not merely to the Corinthian situation addressed in the context (as paedocommunionists must argue), but rather to all celebrations of the Lord's Supper. Paul applies general principles to a specific issue, and we can apply those same principles to the issue we are facing.

Venema's final chapter summarizes the case for the historic Reformed position. He also argues that the view of the covenant (the "Federal Vision") driving the paedocommunionist position in certain circles today erroneously asserts that all baptized members of the church enjoy all the saving benefits of communion with Christ, which borders on sacramentalism. This argument is supported by an appendix on "Covenant Theology and Baptism."

This book is a solid defense of the traditional Reformed opposition to paedocommunion; it effectively dismantles the arguments for paedocommunion.