The Erosion of Inerrancy in Evangelicalism:
Responding to New Challenges to Biblical Authority 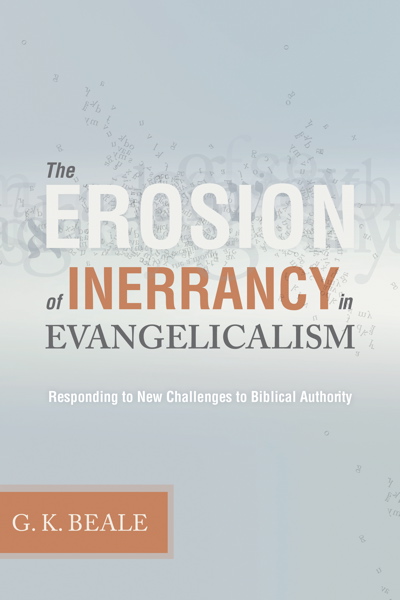 The Erosion of Inerrancy in Evangelicalism:
Responding to New Challenges to Biblical Authority

In recent years, a significant number of professors at ostensibly evangelical colleges and seminaries have been propounding views of the Bible that previously were considered inconsistent with the inspiration and authority of Scripture. Some institutions have encouraged such broadening of views, while others have reaffirmed their traditional position, with shedding of faculty in schools of each type.

One celebrated case involved Old Testament professor Peter Enns, who left Westminster Theological Seminary in Philadelphia in 2008 as that school reaffirmed its conservative stand on Scripture. When Enns's views became widely known in 2005 and 2006, Professor Greg Beale (then at Wheaton College; now coming to Westminster) jumped into the fray, and the two scholars debated many of the issues in various journals. Beale has now, in The Erosion of Inerrancy in Evangelicalism, reissued his (revised) critiques of Enns, along with summaries of Enns's responses prepared by Beale's research assistant, Mitch Kim. This takes up the first four of the book's seven chapters.

The final three chapters address two related issues. Chapter 5 defends the traditional view that Isaiah wrote the whole book of Isaiah. Chapters 6 and 7 attempt to reconcile biblical cosmology with modern science by arguing that the Bible often refers to the cosmos, not with literal description, but by figuratively portraying it as a huge temple, thereby expressing a theological understanding of it. Three appendixes present (1) a critique of the postmodern views of Steven Moyise on Scripture, (2) the Chicago Statement on Biblical Inerrancy (the standard evangelical position, written in 1978 and signed by nearly 300 evangelical scholars), and (3) selected quotations from Karl Barth on the fallibility and errancy of Scripture (showing that Barth was not evangelical).

On the whole, I take Beale's side in the defense of Scripture. It is good that his critique of Enns has been revised and is available in book form. The other items in this book are useful and well worth study. However, the title of the book (reinforced by expansive chapter titles) suggests that it presents a comprehensive critique of the so-called progressive evangelical movement—which it does not even attempt to do. Christian publishers should resist the temptation to use titles that promise more than they deliver. You would never guess from the title page or the table of contents that the book is a reprinted critique of Enns, with a few miscellaneous things added on. Nonetheless, those who are interested in these important issues at an academic level should definitely read the book.

Beale's criticisms of Enns are strong, but a deeper theological critique is also needed. His defense of Isaianic authorship is good, though critics have already dismissed it as nothing new. His effort to explain biblical cosmological language is more problematic, but worth careful consideration. The appendix on Moyise is highly recommended.