"Right Reason" and the Princeton Mind: An Unorthodox Proposal 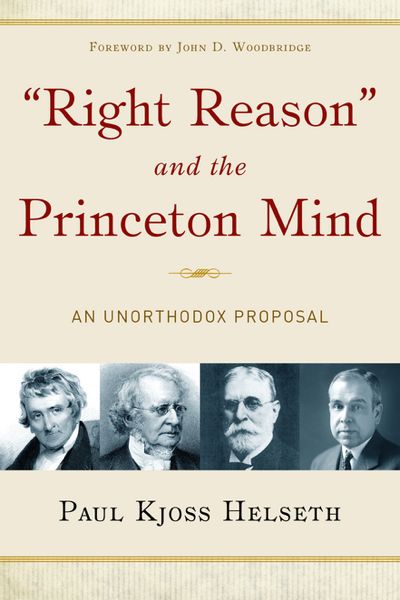 "Right Reason" and the Princeton Mind: An Unorthodox Proposal

This book contains a nuanced argument against the standard ("orthodox") view that the Old Princeton faculty, especially Alexander, Hodge, Warfield, and Machen, were heavily influenced by the Enlightenment idea (represented by Scottish Common Sense Philosophy) that the mind has the equipment to understand the truth of God, apart from the work of the Holy Spirit, through the use of "right reason" (logical thinking).

Helseth insists that the faculty, because of its commitment to confessional Calvinism, taught that the moral condition of the mind, due to the fall, affects the ability of reason to understand the truth of God correctly. He admits they were not always consistent in their approach, but insists they clearly taught that the ability to reason "rightly" involves the "whole soul" (p. xxxiv). In plain English, they taught that the head is not able to act apart from the influence of the heart, so that a man must be born again in order to understand God's truth correctly. Helseth allows that the Princetonians did use some of the principles of Scottish Common Sense thinking in approaching theology, but they did not allow it to take priority over Scripture as the foundation of their theology. He seeks to prove this by citing excepts from Alexander, Hodge, Warfield, and Machen.

This is an important issue today. Writers in modern evangelical and Reformed circles are asking whether men who are dead in sin can come to faith in Christ using right reason (i.e., by thinking logically) to evaluate the evidence for the truth of the gospel.

One point in the book needs to be addressed because of the interest that many in the OPC have in the apologetics of Cornelius Van Til. On pages 128ff., Helseth argues that Van Til misread Warfield's statement that the faith God gives is grounded in "right reason" (i.e., faith does not bypass the intellect). Van Til asserted that Warfield failed to distinguish clearly between the thinking of the born-again man and the man still dead in his sins. However, it seems the problem is not so much that Warfield and Van Til disagreed, but rather that Warfield wrote his material on apologetics before Van Til wrote his! A careful reading of Warfield's article on apologetics shows that Warfield did indeed hold that sin keeps the unregenerate man from thinking properly about the facts of creation. Only a renewed or born-again soul would reason rightly. So Van Til and Warfield do not disagree.

Helseth, however, has missed something of Van Til's point, which is that the Princetonian use of right reason assumes that man can approach truth, including the truth of the gospel, in an unbiased or neutral way. But no man does that. We all have presuppositions formed by our spiritual commitments for or against the living God and interpret facts accordingly. Only the believer has the capacity to use reason rightly. Hence, you must be born again to reason rightly.

This is not an easy book to digest and is highly specialized in its concerns. It can be read with profit, but let the reader beware: you have to bring a fully engaged, renewed mind to the book to profit from it!