Tributes to John Calvin: A Celebration of His Quincentenary 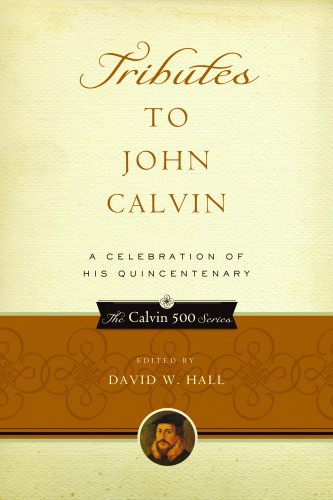 Tributes to John Calvin: A Celebration of His Quincentenary

Even though 2009, the five hundredth birthday of John Calvin, has come and gone, books celebrating the significance of Calvin still pour forth from the presses. And that is a good thing! The church has been blessed with the Calvin 500 Series, and this volume strengthens the reputation of what is now an eight-volume set. Tributes to John Calvin consists of edited papers presented at the Calvin 500 conference held in Geneva in the summer of 2009.

The papers in Tributes to John Calvin were presented by twenty-two scholars under three categories: Calvin's times, Calvin's topics, and Calvin today and tomorrow. The book opens with a foreword by R. Albert Mohler, president of Southern Baptist Theological Seminary in Louisville, Kentucky. He comments on the abiding significance of Calvin as a Reformer, theologian, biblical scholar, lawyer, churchman, and follower of Christ. As Mohler points out, Calvin's theological contribution to the church appears more rather than less significant today than at previous times (p. xii). David Hall follows Mohler with a preface describing the original context for the presentation of the papers. He notes that there is not complete agreement among the scholars on every point of Calviniana (pp. xv–xx).

The first nine chapters examine Calvin in the context of his own time and place. They range over such subjects as Calvin's children, ecclesiastical discipline, Calvin as a lawyer, Calvin as a Frenchman, Calvin and women, Calvin and preaching, Calvin as a liturgist, Calvin as a New Testament commentator, and Calvin as a comrade in arms with Martin Luther. Especially helpful are the chapters on preaching by Hughes Oliphant Old and liturgy by Terry Johnson. Calvin understood preaching to be itself a form of worship. This is a bracing tonic for our times, when preaching is increasingly ridiculed even in so-called Christian circles.

Chapters 10 through 17 focus on topics of interest to Calvin himself. These include the catholicity of Calvin's theology, Calvin on sacred and secular history, Calvin's principle of worship, Calvin's doctrine of assurance, Calvin's principles of governance, prayer, Calvin's doctrine of Scripture, and Calvin's eucharistic ecclesiology. David Hall's chapter on governance summarizes what is given fuller exposition in another of the Calvin 500 Series volumes, Calvin and the Public Square. Here Hall argues for a similarity between Calvin's view of the church and his view of the state (i.e., republicanism).

The final section, consisting of chapters 18 through 23, considers Calvin's significance for today and tomorrow. This includes a Calvin bibliography, a history of the contention in nineteenth-century American Reformed circles, Calvin's impact on the arts, Calvinism in Asia, union with Christ in Calvin's theology, and Calvin's view of life, death, and eternal life. The chapter on union with Christ by Bruce McCormack makes for interesting, if not completely persuasive, reading.

All in all, this is a full and satisfying book. Readers will disagree here and there, but these studies remind us that we ought to be thankful for the ministry and influence of John Calvin.