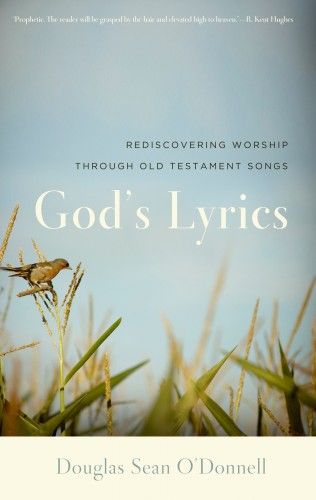 This book is a must read for anyone who is interested in the question of what to sing in worship.

O'Donnell starts with the conviction that we should learn our principles of hymnody from Scripture itself. He examines which hymns are sung most often in American churches and concludes that "many contemporary and some classic lyrics have blurred our perception of God and his work" (p. xxii).

O'Donnell begins with five excellent sermons on what he calls "the six divinely inspired lyrical poems found in the narrative of Scripture's historical and prophetic books"—the Song of Moses (Ex. 15), the second Song of Moses (Deut. 32), the Song of Deborah (Judg. 5), the Songs of Hannah and David (1 Sam. 2 and 2 Sam. 22), and Habakkuk 3.

Part Two then explores the "applications for Christian worship" by explicating four characteristics of Old Testament song (which he sees also in New Testament songs):

O'Donnell states frankly that the biblical songs focus on what God has done. But much of classic hymnody has celebrated "one's own regeneration, faith, love, and service." As examples, he points to "Jesus, Lover of My Soul," "Amazing Grace," and "Jesus Paid It All." He even chides "Holy, Holy, Holy" for never getting specific about what God's works are! (p. 136).

O'Donnell does his best to be fair to contemporary hymnody. He points to the refreshing trend in the work of Keith and Kristyn Getty and Stuart Townend of "refocusing on the works of God," and he praises "In Christ Alone" for emphasizing the four key works of Christ. But he concludes that most contemporary songs entirely fail to explain why we are to praise God. "We are left to wonder who this God is and why we are called to worship him." He points out that in 46 of the top 50 contemporary Christian songs, the Incarnation is mentioned only three times, Christ's death only four times, his resurrection only twice, and his return only twice. As O'Donnell puts it, "If you have a robe, now is the time to rend it! Any ashes? Throw them on your head.… Our great God is worshipped and adored when, and only when, we sing of his mighty acts in salvation" (pp. 143–44).

But a proper focus on the "indicative" of what God has done should always take us to the "imperative" as well. O'Donnell also insists that if we take Colossians 3:16 seriously, then our songs should call one another "to put off pride, idolatry, immorality, and ungodly fear, and to put on courage and mercy—and even to rejoice in our God-graced righteousness" (p. 161). He points out that this should not be the center of our hymnody, but should have a very real place. He cites, as good examples, "How Firm a Foundation" (how this foundation sanctifies us through trials) and "When I Survey the Wondrous Cross" ("and pour contempt on all my pride").

In Part Three, O'Donnell offers his own musical rendition of these songs, but his versification is surprisingly tentative. While his exposition of Habakkuk 3 is wonderful, his musical rendition never gets beyond vague generalities. (Andy Deliyannides' 2004 rendition provides a much more concrete statement of the work of God.)

Speaking as the pastor of a congregation that sings these songs, I can testify that many people initially cringe at singing these sorts of lyrics. But as they work through the biblical concept of worship (and as they grasp that judgment is good news, because Christ has crushed the head of the serpent), the people of God can truly sing for joy because God's righteousness prevails!