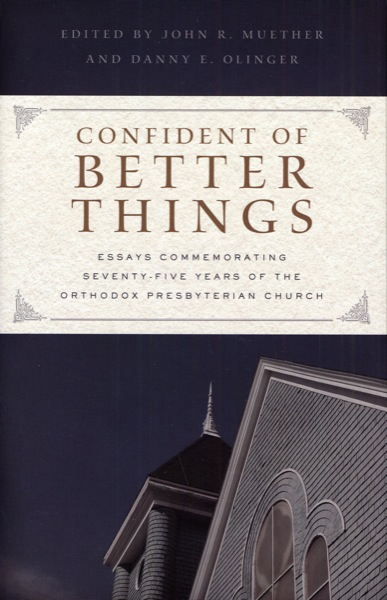 Confident of Better Things: Essays Commemorating Seventy-five Years of the Orthodox Presbyterian Church, edited by John R. Muether and Danny E. Olinger. Published by the Committee for the Historian of the OPC, 2011. Hardback, 520 pages, list price $12.00. Reviewed by Wayne Sparkman, director of the PCA Historical Center.

There is no way to do justice to this book, authored by twenty-six people, especially since the content is consistently good. So please bear with me as I skip a stone across the literary waters and touch on a few points.

This is one of two handsome volumes issued in commemoration of the seventy-fifth anniversary of the founding of the Orthodox Presbyterian Church. The other is D. G. Hart's Between the Times, which examines the middle years of the denomination. Confident of Better Things groups twenty-six articles under five headings: history, theology, Christian education, mission of the church, and ecumenicity (plus a conclusion). Both are Smyth-sewn hardbacks. I am certain they will provide many decades of good service in your library.

I was pleased to discover that there are just a few articles with any age on them, and those are well chosen and suited to their purpose. Most are recently authored, with fresh and timely content.

The book has a good mix of articles, in terms of both intended audience and length, with something for everyone. Some articles are shorter, while others are longer or more technical. Few articles employ Greek, and even there the serious reader can still get the author's points.

John Muether takes the opening article, recounting the life and ministry of Paul Woolley at Westminster Seminary. I found this an enjoyable read. Danny Olinger's article follows, and it is a veritable primer on contemporary Roman Catholicism and intelligent Reformed response. Roger Schmurr's personal recollections of OPC history, Alan Strange on the legacy of Charles Hodge, and Richard Muller on unity and diversity in our confessional heritage complete the historical portion of the book. Oh, the injustice of a glancing mention!

Under the heading of theology, Bill Dennison provides a Van Tillian analysis of classical Christian education, which for me was one of the most thought-provoking chapters. Ecclesiastes, cessationism, tongues, and redemptive-historical hermeneutics are covered in the next four chapters. Lastly, Robert Strimple's "Was Adam Historical?" proves to be one of the most timely articles, even though it was written some years ago.

Part Three takes up Christian education, and Stephen Tracey presents a rousing encouragement for pastors to continue making progress with the original languages of Scripture. Tom Tyson's chapter on catechetical instruction is challenging. Then Tom Patete's chapter on Great Commission Publications doubles as a chapter on ecumenical relations with the PCA, while Greg Reynolds presents what amounts to an all-important capstone for his book on preaching in the electronic era.

Part Four covers the mission of the church, and here Mark Bube's chapter seems to be the focal point of the book, aptly titled "Power in Weakness." The importance and place of ruling elders is well treated by John Shaw.

The book concludes on an eschatological note, with Part Five on ecumenicity. After Jack Sawyer's recounting of OPC work in New Zealand and Bob Needham's succinct history of the Presbyterian and Reformed chaplaincy, this section closes with Robert Godfrey's telling of relations between the OPC and the URCNA, though all the while I was constantly reminded of Godfrey's grand dream of Reformed unity.

J. V. Fesko closes by looking forward to the next anniversary, yet warning that "one of the greatest dangers for the OPC, indeed any church, is elevating matters of adiaphora, things indifferent … to the level of articles of faith, practice, or confession subscription" (p. 503).

Earlier, Reynolds had said, "One of the important benefits of celebrating historical milestones is that as we look back at where we have come from we gain a sense of community and the importance of various influences upon our lives and ministries" (p. 328). This volume stands in evidence of that truth. May our Lord and Savior be praised for what he has accomplished.

For a fuller review article by Mr. Sparkman click here.