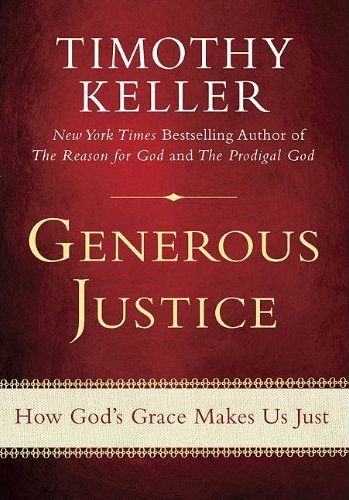 Timothy Keller is pastor of Redeemer PCA in New York City. In Generous Justice, he exhorts the Christian to take up the task of "doing justice" in the church and the world. Generous Justice does a good job of challenging our deep-rooted, self-centered greed. Its exhortations to a radically generous life are ones that every Christian needs to wrestle with, and Keller rightly points our hearts to see how concern for the poor, both within and outside of the church, is a fruit of the gospel. Chapter 7, on religious presuppositions and thoughtful interaction with unbelievers with whom we find ourselves in common cause, is particularly helpful.

Nevertheless, Keller's definition of "justice" is problematic. He defines it as a blend of two categories usually kept distinct: (1) rectifying justice and (2) primary justice or care for the poor (p. 12). Together they constitute "social justice" (p. 14). Keller uses that term without any real attempt to redeem it from modern political parlance, where it includes state-enforced redistribution of wealth.

Keller's melding together of what is more commonly called justice and charity creates significant theological problems. For example, the neighborliness of the Good Samaritan, called mercy in Luke 10:37, is dealt with in the chapter "Justice and Your Neighbor." But though the law requires mercy from us, this does not mean that mercy is then justice. This error compounds when the role of the civil government in enforcing "justice" is examined. Keller responds to a question from Reformed pastor Kevin DeYoung whether a passage like Isaiah 58 supports state-sponsored redistribution efforts. His answer: "Deuteronomy 15 and the other Mosaic legislation that we have surveyed seem to answer DeYoung's question with a 'yes'" (p. 29). Keller does temper his answer by describing the difficulty of applying Old Testament civil law, yet his answer is still "yes."

However, the Old Testament welfare laws, such as the laws on gleaning and Jubilee, lacked civil sanction. Given that Keller has already denied the application of laws that did have civil sanction to the current civil sphere (e.g., adultery), it is hard not to think that Keller is being arbitrary in his application of Old Testament civil law. When he declares, "In the end what the Bible says about social justice cannot be tied to any one political or economic policy," this seems like special pleading. Certain political and economic policies are actually wrong, for the Bible not only teaches us "Thou shalt not steal," but also teaches us about the fundamental difference between the church, which exhorts to mercy by the word, and the state, which enforces justice by the sword. Conflating justice and mercy significantly blurs these distinct roles.

The end of this road has historically been the social gospel. Keller tries to guard against this: "To consider deeds of mercy and justice to be identical to gospel proclamation is a fatal confusion" (p. 139). Still, the focus on social justice cannot help but bear fruit. Keller writes: "From the law of 'Jubilee' (Leviticus 25) to the rules for gathering manna in Exodus 16, the principle was to increase 'equality'" (p. 57). I must admit that I prefer Charles Wesley: "The year of Jubilee is come; return ye ransomed sinners home, return ye ransomed sinners home."