Inspiration and Incarnation: Evangelicals and the Problem of the Old Testament 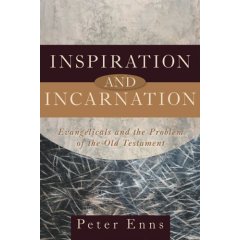 Inspiration and Incarnation: Evangelicals and the Problem of the Old Testament

Peter Enns (professor of Old Testament at Westminster Theological Seminary in Philadelphia) writes this book for people who struggle, in light of modern scholarship, to maintain belief in the evangelical doctrine of inspiration (pp. 13, 15). He approaches this problem in three parts. How can the Bible be God's word if the Old Testament looks like other ancient Near Eastern literature (pp. 23-70), if it contains a diversity of conflicting theological perspectives (pp. 71-112), and if it is often quoted in the New Testament out of context (pp. 113-166)? Such things make the Bible look more like man's word than God's.

Ironically, opponents and proponents of inspiration both believe that the more humanlike the Bible is, the less divine it must be (pp. 18, 21, 32, 41, 43, 73). Liberals deny inspiration because of its humanness, while conservatives gloss over the difficulties of the human aspects of the Bible to bolster the doctrine of inspiration (pp. 32, 39, 47-48, 72), committing "intellectual dishonesty" (p. 107).

Enns corrects this implicit docetic assumption with "the incarnational analogy," which is able to embrace the cultural, human side of Scripture without diminishing its divine authorship. Just as Christ is wholly God and wholly man, so is Scripture (pp. 17-18). "The end result, I truly hope, will be to provide a theological paradigm for people who know instinctively that the Bible is God's word, but for whom reading the Bible has already become a serious theological problem—perhaps even a crisis" (p. 15).

In each of the three main sections of the book, readers will be provoked by the extent to which Enns is willing to embrace the Bible's humanness. He says the opening chapters of Genesis exemplify mythical history (pp. 39-41, 49-50, 53, 55-56). "[God] adopted the mythic categories within which Abraham—and everyone else—thought. But God did not simply leave Abraham in his mythic world. Rather, God transformed the ancient myths so that Israel's story would come to focus on its God, the real one" (pp. 53-54). Enns defines "myth" by saying, "Myth is an ancient, premodern, prescientific way of addressing questions of ultimate origins and meaning in the form of stories: Who are we? Where do we come from?" (p. 50). He says the distinction between myth and history "seems to be a modern invention. It presupposes—without stating explicitly—that what is historical, in a modern sense of the word, is more real, of more value, more like something God would do, than myth" (p. 49). This is another way of saying that some things in Genesis (and beyond?) are not necessarily factually true. How much historicity is being denied?

Enns also says parts of the Old Testament accommodate polytheism, presuming the existence of other gods with the surrounding ancient Near Eastern culture (pp. 97-102). "At this point in the progress of redemption ... the gods of the surrounding nations are treated as real. God shows his absolute supremacy over them by declaring not that 'they don't exist' but that 'they cannot stand up against me' " (p. 102).

Enns appears to say that the apostles interpreted the Old Testament eisegetically (reading meaning into Scripture) rather than exegetically (getting meaning from Scripture), imposing Christ on the Old Testament according to culturally common methods of interpretation. "The apostles did not arrive at the conclusion that Jesus is Lord from a dispassionate, objective reading of the Old Testament. Rather, they began with what they knew to be true—the historical death and resurrection of the Son of God—and on the basis of that fact reread their Scripture in fresh way" (p. 152).

The book concludes with a plea for temperate discussion, apart from "judgmental suspicion" and "polarization and power plays." Enns anticipates being vilified, writing, "The problem is that true Christians erect a wall of hostility between them, and churches, denominations, and schools split" (p. 172).

This plea cannot smooth over the troubling fact that Enns writes beyond the boundaries of the Reformed tradition as exemplified by chapter 1 of the Westminster Confession. When he says the Bible looks human, he means it does not look divine. When he says Genesis is part myth, he means it is not true in historic, narrative particulars. When he says "conflicting theologies," he means the Bible contradicts itself. This book has the cumulative effect of lowering conservative preconceptions about the inspiration of Scripture. It seems unlikely that it will raise any liberal-leaning preconceptions. Liberals believe the Incarnation is a myth.