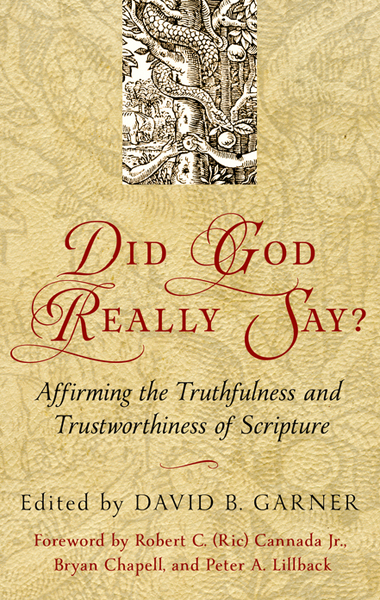 In response to the growing numbers of those emerging from evangelical and Reformed circles who "project creaturely limitations onto the Scriptures" (p. ix)—often called "progressive evangelicals"—seven professors at three Reformed seminaries (Westminster [Philadelphia], Reformed, and Covenant) have collaborated to produce a volume, as its subtitle puts it, "Affirming the Truthfulness and Trustworthiness of Scripture." Judging by the foreword signed by the three leaders of these schools, this book seeks to assure their constituencies that their institutions are standing firm on the Westminster Confession's doctrine of Scripture in a relativistic, postmodern age. The seven essays are informative and insightful, presenting "a fresh articulation of the vital truthfulness and reliability of Scripture" (p. xvi). Six of the seven essays are written versions of seminar lectures delivered at the 2011 General Assembly of the PCA.

After a pointed and stirring introduction by the editor (David Garner), Scott Oliphint leads off by discussing the foundational (principial) character of the Scriptures as the revealed, self-attesting word of God. A section on the internal testimony of the Holy Spirit would have strengthened this essay.

Next Michael Williams argues that B. B. Warfield, a champion of orthodoxy from a century ago, had "a covenantal understanding of Scripture," involving both a divine speaker and a believing community of hearers.

Michael Kruger's essay responds to recent challenges to the New Testament canon and roots it firmly in the apostolic church. This is a valuable survey; for much more, see his new book, Canon Revisited (Crossway, 2012).

Robert Yarbrough defends the evangelical doctrine of inerrancy (i.e., the Chicago Statement of 1978) as the historic doctrine of the church and urges a sanctified advocacy of it.

Vern Poythress defends the idea that the human language of Scripture can convey truth about the transcendent God to us, over against the skepticism of modern and postmodern thought. For much more, see his recent book, In the Beginning Was the Word (Crossway, 2009).

John Frame examines the views of the prominent Anglican scholar N. T. Wright concerning the truth and authority of Scripture. Frame finds important areas of agreement with Wright's views, but also shows their inadequacies. This is a notably gracious critique.

In the final and most substantial essay, David Garner defends the clarity (perspicuity) of Scripture, particularly against those who exalt humanity (whether the reader, the community of readers, or the academic guild) as the source of meaning and understanding, not the Word working with the Spirit in the heart of the believer.

As a solid reaffirmation of Reformed positions and a clear rejection of progressive evangelical views, this is a good book. However, one should not suppose that this book is, or that it is a substitute for, a thorough refutation of the detailed and sophisticated arguments upon which the rejected views are based.