That's Why I'm Here: The Chris and Stefanie Spielman Story 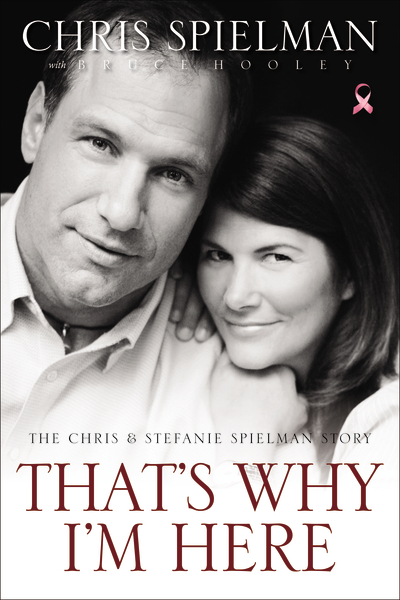 That's Why I'm Here: The Chris and Stefanie Spielman Story

This book is a shift from the theologically Reformed books usually reviewed in New Horizons. The author—a former NFL linebacker—worked on Sundays and is evangelical rather than Reformed.

Near the beginning, Spielman's story highlights his football career—the first high school athlete to grace a Wheaties box, a two-time All-American linebacker from Ohio State, and a veteran of eleven seasons with three NFL teams. Known for his "Tasmanian Devil" drive, Spielman was the first in the locker room and the last to go home. He left the field only to have his spine fused, and then worked hard to get back on the field.

His intense focus on football emphasizes the enormity of his decision to step away from the Buffalo Bills for the 1998 season to care for his wife, Stefanie, after she was diagnosed with breast cancer at the age of thirty. Thus began his twelve-year role as primary caretaker and supporter of Stefanie, his high school sweetheart and a former model. This move brought national attention, giving the couple a platform to raise awareness and more than $10 million for breast cancer research. It also brought their faith into the public arena.

A remarkable woman, Stef battled through five bouts of cancer and was pregnant with the last of her four children after she was diagnosed as Stage IV. She refused a recommended abortion and became the first cancer patient to carry a baby to term while taking Herceptin, a cancer-fighting drug.

So why share their story here? First, unlike many "cancer books," this one is written from the caretaker's perspective, giving an intimate glimpse into the struggles of those who care for the stricken. It tells how Spielman told his children that their mother's battle would soon be over and how he helped them adjust after she went to glory in 2009. More importantly, this is an honest account of their simple yet solid faith in God through the best and worst of times.

Chris, now an ESPN college football analyst, tells how he curled up in a ball in his car's backseat, crying to God, when Stef's cancer went to her liver, marking the start of her final battle. He tells about writing Bible verses on his daughter's arm to encourage her after her mother died. The book is interwoven with Bible verses that God used to help their faith grow.

You don't have to love football or be dealing with breast cancer to appreciate this book, which is a stirring love story between Chris and Stef and their gracious God. One woman thanked Stefanie for all she had done for breast cancer awareness. Stef responded, "Don't you understand? That's why I'm here"—the title of this book. Reading their story helps us to appreciate how God works in others, which can encourage our walk as well.