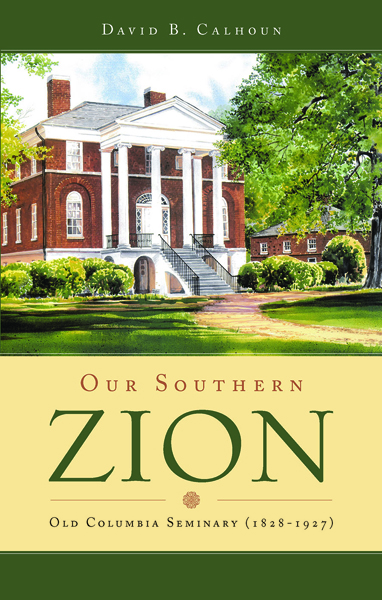 With this book, David Calhoun follows his two-volume history of Princeton Seminary by writing a shorter history of Columbia Theological Seminary, which was located in Columbia, South Carolina, from 1828 to 1923, and then in Atlanta, Georgia, from 1923 to 1927, when it closed. The title "Our Southern Zion" was given to the city of Columbia, where the seminary and First Presbyterian Church joined forces to educate men for the ministry and reach the world with the gospel. The seminary served the PCUSA until the War Between the States, and then became the theological institution for the Southern Presbyterian Church (PCUS).

This is an honest book. The author begins by informing the reader that "the 'Old Columbians' purposed to honor Christ in their teaching and living," but that "the Southern theologians' reading of Scripture 'was hampered and twisted by the degree of fallenness which remained in their culture'" (p. xvii, quoting Douglas Kelly). He is referring to the maintenance of slavery before the Civil War and of segregation afterward.

But it is also a careful book. It informs us that many of the men of the Southern Church, both seminary professors and pastors of First Presbyterian Church and other churches, did all they could for the slaves before the War and after their emancipation—building churches for them to worship in, preaching in and pastoring all-black congregations, and training them for the ministry.

Calhoun tells the whole story of the seminary and the way it supplied the Presbyterian Churches in both the North and the South with ministers. Here we read of John Lafayette Girardeau (considered by many to be, as a preacher, the equal of his contemporary, Charles Spurgeon), James Henley Thornwell, Benjamin Morgan Palmer, Robert Lewis Dabney, and others whom Christ used to build his church for nearly a century.

He also tells us how the Southern Church was divided for close to a decade over the teaching of evolution by James Woodrow. We also learn that President Woodrow Wilson, son of James Ruggles Wilson, who taught at the seminary, and nephew of James Woodrow, made a public profession of faith at First Presbyterian Church in Columbia.

There are also sad tales of theological decline in the Presbyterian and other churches in the United States and how Columbia, along with Princeton, tried to stem the tide, but in the end failed to do so.

Our Southern Zion is not as full a book as the author's history of Princeton Seminary, and I felt it rushed through the story a bit too much. Still, it is a delightful and important book. We who focus so much on Princeton and Westminster Seminary in the North do not do justice to the history of the Presbyterian Church in the United States, North and South, if we neglect the history provided by this book.