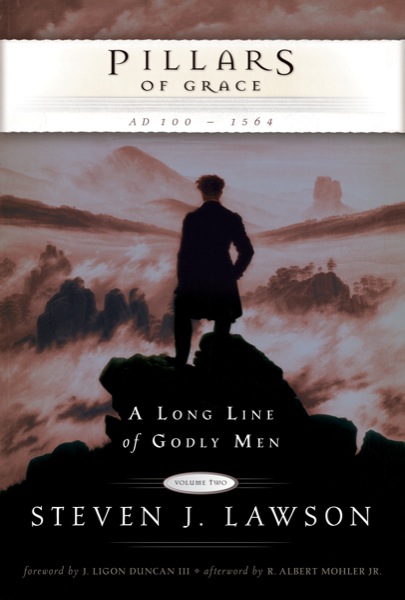 Pillars of Grace is the sequel to Lawson's first volume, Foundations of Grace. Each volume underscores the sovereign grace of God in salvation, the truth that God will have mercy on whom he will have mercy (Rom. 9:15). In Foundations of Grace, Lawson expounds this message as it appears in the Bible. In Pillars of Grace, he demonstrates that the Lord maintained this biblical testimony in the succeeding centuries of church history, even in the darkest days.

Lawson shows that the teaching that God chose a people before the foundation of the world to be holy and blameless before him (Eph. 1:6) is found in the church fathers, the medieval doctors, and the Protestant Reformers.

The first half of the volume covers the patristic era. The second half is evenly divided between the medieval period and the Reformation. This forcefully conveys the fact that the doctrines of grace did not originate in the sixteenth century. The doctrine of sovereign grace was expounded by the church fathers, and it was not entirely forgotten in the Middle Ages. Lawson reminds us that the Holy Spirit has raised up powerful witnesses to the truth of election unto salvation.

Lawson provides portraits of twenty-three theologians of grace. He includes men whom one would expect to find: Augustine, Bradwardine, Luther, and Calvin. There are also chapters on figures who are less well known within the Reformed community: Isidore of Seville, Gottschalk of Orbais, and Bernard of Clairvaux. The material on Bernard helps one to appreciate why Calvin quoted from him so frequently in the Institutes of the Christian Religion.

The chapters on Athanasius, Basil of Caesarea, and Gregory Nazianzus are valuable. We tend to think of the fourth-century fathers exclusively in terms of their Christological and Trinitarian contributions. Lawson shows how they bore witness to the doctrines of grace as well.

Lawson's style is engaging. He builds each chapter on the primary sources—documenting his presentation with endnotes, so that the reader can do further study in the sermons, treatises, books, and letters of the theologians themselves. He concludes each chapter with a pastoral word of exhortation and counsel.

This book would make a nice study for an adult Sunday school class. It would also be a good textbook for an introductory college class in church history. It is not overly technical, and its presentation of great men who lived in different times over the course of fifteen hundred years is interesting, informative, and uplifting.