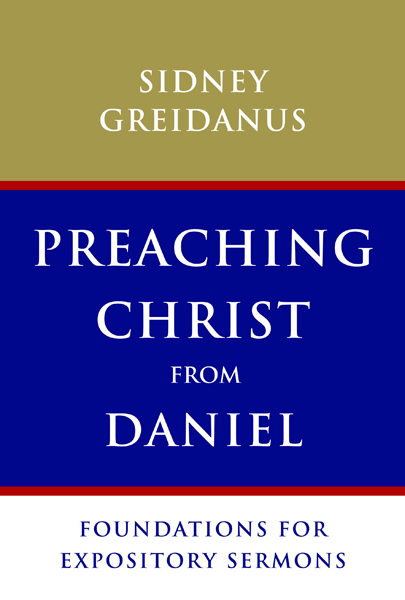 According to Jesus, the whole Old Testament is about him (cf. Luke 24:44–45). In Preaching Christ from Daniel, Sidney Greidanus agrees. He is convinced that the key to biblical interpretation is the person and work of Jesus Christ.

Greidanus's book is not a traditional commentary. It's about preaching the book of Daniel and is intended "to help busy preachers and bible teachers proclaim the good news of Daniel" (p. x).

The book has the preacher and preaching in mind throughout. The help for preachers is summarized in appendix 1, "Ten Steps from Text to Sermon." These steps are woven into his exposition of each chapter in Daniel. The help continues in appendix 2, "An Expository Sermon Model," where he suggests three main elements of each sermon, explains each element, and relates them to each other, to make a sermon focused upon the theme and goal of the passage.

Greidanus recommends that the sermon be written out in manuscript form, and he explains how to write a sermon in an "oral style" (p. 28).

This is a book about preaching Christ from Daniel. Greidanus writes "to demonstrate and reinforce the redemptive historical Christocentric method" (p. x). He cautions preachers to avoid moralism. The redemptive-historical method is Christocentric. The exegete and preacher must look for possible ways to move the sermon from the Old Testament narrative to the fulfillment that comes in Christ. Greidanus suggests "seven ways to Christ" (p. 27), and he demonstrates them in his exposition of each of the eleven literary units of Daniel.

He applies the book of Daniel throughout. Israel's situation in Babylonian exile anticipates the church's situation in the world. The church is now in exile, and believers are strangers and aliens among the nations. God's message to the church then and now is one of encouragement. Let the people of God remain faithful during their pilgrimage, even in the worst kind of persecution, and be comforted to know that God is still sovereign. In both the narrative and the apocalyptic sections of Daniel, the message is the same. The future is firmly in God's hand. He rules all human kingdoms in the interest of establishing his eternal kingdom.

In the apocalyptic sections of the book, the reader will rejoice to find the Reformed eschatological insights that we are already familiar with from E. J. Young's The Prophecy of Daniel and others.

Greidanus has written a different kind of commentary on Daniel, but one of great value. Although he states regularly that the goal of redemptive history is the perfected kingdom of God on earth, he sees the church (Old Testament or New) as in the world but not of it, and that her citizenship is in heaven. Her calling is to remain faithful in her religion and ethic, even in the face of persecution, realizing that in Christ she has received a kingdom that cannot be shaken.