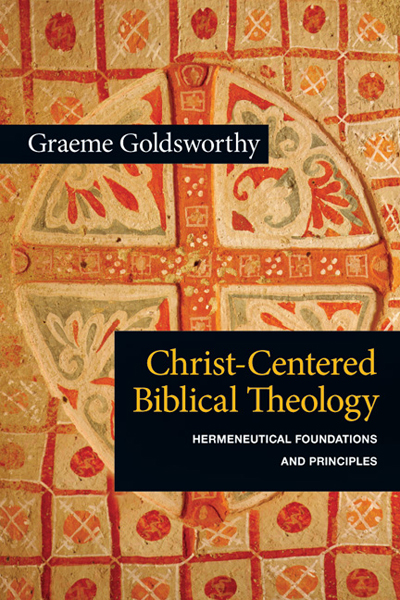 Christ-Centered Biblical Theology is an interesting book because the author is quite knowledgeable of American Reformed biblical theology. He interacts mainly with Geerhardus Vos and his "disciples," including Edmund Clowney, Dennis Johnson, and Willem VanGemeren (pp. 80–90). Goldsworthy seeks to develop the optimal approach to biblical theology. In his judgment, Vos's contribution is helpful, but requires improvement.

Goldsworthy alternatively proposes the "Robinson-Hebert schema," which he draws from two Australian Anglican theologians, Donald B. Robinson and A. G. Hebert (pp. 21–23). His chief criticism of the Vos-Clowney approach is that when it divides redemptive history into epochs, it fails to give adequate attention to the period from Moses to Christ (p. 132). The Robinson-Hebert schema is supposedly superior in this regard (p. 134).

According to Goldsworthy, there are four weaknesses to the Vos-Clowney approach: (1) It identifies Moses and Sinai as new beginnings, which separates them from the antecedent promises to Abraham. (2) It fails to give adequate recognition to the Davidic and Solomonic glories as a fulfillment of Abrahamic promises (1 Kings 3–10). (3) It downplays the role of prophetic eschatology. (4) It does not provide an adequate basis for a working typology (p. 169). One of the limiting factors in the Vos-Clowney approach, Goldsworthy suggests, is its connection to the Westminster Confession's teaching on the covenant of works. Goldsworthy believes that his own Thirty-nine Articles, by comparison, allow more interpretive flexibility (p. 169, n. 11).

However, it remains to be seen whether Vos and Clowney ever intended their epochal division of redemptive history to be a hermeneutical straightjacket. When Paul, for example, divides redemptive history, he places markers at Adam, Moses, and Christ (Rom. 5:14–21), but who would suggest that such divisions are exclusive of other periods within this broader framework? Goldsworthy largely examines Vos's Biblical Theology to ascertain the weaknesses in his approach, but does not explore his Eschatology of the Old Testament or his "Eschatology of the Psalter," which deal with the interval between Moses and Christ and its eschatological outlook.

Furthermore, Goldsworthy at times evidences a lack of familiarity with Reformed history. He incorrectly states: "The Reformation restored a biblical view of history only to have it squandered in post-Reformation orthodoxy's 'resurgence of an almost purely systematic, doctrinal approach.'" He claims that the covenant theology of Johannes Cocceius reestablished redemptive history in Protestant theology (p. 57). This is factually incorrect and likely explains some of Goldsworthy's mild antipathy toward the theology of the Westminster Standards. Vos believed that covenant theology was a vital example of the biblical theology of an earlier age (see his essay on the history of Reformed covenant theology). Hence, his approach to biblical theology may not have the weaknesses that Goldsworthy claims.

Despite these shortcomings, Goldsworthy's book is a stimulating read. It forces the reader to reconsider basic interpretive assumptions. It will encourage people to pull Vos and Clowney off their shelves and reread their rich works.