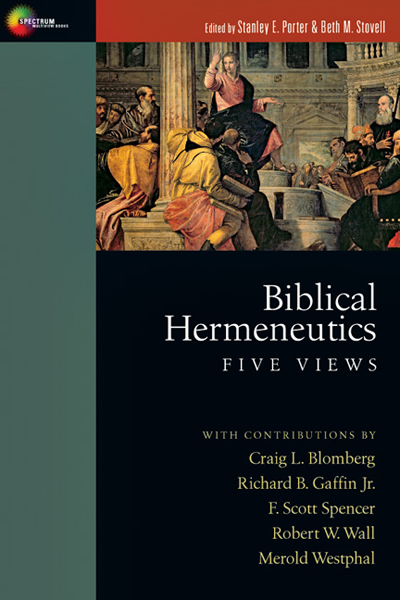 Has it not been said that evangelical theology in the post-Enlightenment era, with its emphasis on cultural relevance and the authenticity of human experience, is only one step away from a critical-liberal view of Christianity? To what extent has evangelical hermeneutics adopted modern critical methods? Well, if there is any question about how much critical thinking has infiltrated evangelical scholarship, one needs to look no further than the essays that appear in this volume—the lone exception being the stellar presentations by Richard B. Gaffin, Jr.

This book provides "a forum for discussion … from several of the major advocates of these diverse models. Each contributor provides a position essay describing the traits that characterize his perspective and a response essay describing his position in comparison to the other approaches" (pp. 11–12). The format is beneficial and engaging, especially the responses. Also, the editors required each author to apply his particular hermeneutical position by interpreting Matthew 2:7–15, which quotes Hosea 11:1. This enables the reader to investigate and evaluate each author's approach to the same text.

Five positions are represented in the volume. Craig Blomberg maintains that "the historical-critical/grammatical method seeks the original meaning of biblical authors as they wrote texts to specific audiences" (p. 145). Hence, he asserts that his method is the "necessary foundation" for all methods (p. 133). F. Scott Spencer's literary/postmodern view is a "literary-centered" interpretation of a hermeneutical triad: the biblical text given to real readers (original as well as throughout history) who respond to the authors who produce the text (p. 49). Merold Westphal admits that his philosophical/theological view "is not a method, a strategy, a procedure, much less a set of rules that tells us how to go about interpreting the Bible" (p. 84). Rather, his concern is "identifying" the presuppositions that underlie hermeneutical methods. Robert W. Wall's canonical view follows Brevard Childs, who understood that the canonical status of Scripture directs us to "the received, collected and interpreted material of the church and thus establishes the theological context in which the tradition continues to function authoritatively for today" (p. 112).

The redemptive-historical approach of Richard B. Gaffin, Jr., accents the historical interrelationship between the deed and word of God's redemption and revelation as recorded in the biblical canon centered in Christ. Both his presentation and his response stand out. His response to the other positions may be one of the most helpful and penetrating articulations of the authority of Scripture that we have witnessed in decades. By revealing that the other viewpoints are not based upon the absolute authority of the Word of God and the internal witness of the Holy Spirit, Gaffin exposes their frailty. He shows how they have not overcome the Enlightenment's view of the autonomy of human reason. Reminding us of J. Gresham Machen's defense of biblical orthodoxy against modernism, Gaffin defends the authority of the Word of God in the context of evangelical assimilation into modernism. Every candidates and credentials committee in the OPC should make Gaffin's essay and response required reading for each ecclesiastical candidate.