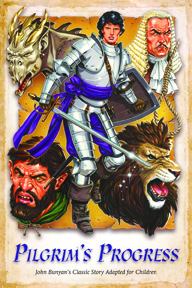 John Bunyan's epic allegory of the Christian life, Pilgrim's Progress, has been translated, abridged, and adapted many times since it first appeared in 1678. The latest of these adaptations came out in June of this year. Published by Great Commission Publications, its large print, simplified language, and vivid illustrations are designed to appeal to six- to twelve-year-olds.

Anna Tremiew, in consultation with John L. Musselman of the Jackson Institute, chooses some of the best-known events from the original story and retells them in a way that retains the feel of Bunyan's writing and also appeals to young audiences. The events involving the Slough of Despond, the Wicket Gate, the Hill of Difficulty, House Beautiful, Vanity Fair, Apollyon, Giant Despair, Doubting Castle, the Celestial City: all are charmingly retold here to entertain and inspire.

The tale has not been reduced to a series of Indiana Jones–type adventures, though. Tremiew, like Bunyan, includes some fairly sophisticated theology within the plot, which will undoubtedly provide families with excellent fodder for discussion. (GCP also plans to publish a companion curriculum for use in church education programs.)

The rich, saturated colors and vivid detail of Drew Rose's illustrations bring the story to life.

A glossary helps readers understand the meaning of settings (e.g., the Slough of Despond) and character names (e.g., Pick-thank) that might have become obscure in our own time. Besides the glossary and a glossary index at the end, this edition includes a map of Christian's journey, a message from the editor about the book, and an introductory biography of John Bunyan.

This is an ideal book to share as a family. I read it aloud to my seven-year-old, and we both enjoyed it. When it was missing one evening, I discovered that my thirteen-year-old had sneaked away with it to read on his own! For a family-friendly introduction to one of the greatest tales ever told, try Pilgrim's Progress: John Bunyan's Classic Story Adapted for Children, adapted by Anna Tremiew, illustrated by Drew Rose, and now available from Great Commission Publications.