Art and Music: A Student's Guide 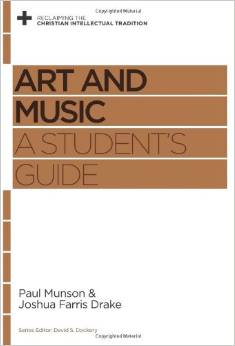 Art and Music: A Student's Guide

In the must-get series Reclaiming the Christian Intellectual Tradition (edited by David Dockery) is Art and Music, by Paul Munson and Joshua Farris Drake. The authors, both professors of music at Grove City College, "begin with beauty because it is what makes art, art" (p. 15). Some philosophers may quibble over the meaning of beauty, but "ordinary people have always known that the reason we draw and sing is to please viewers with beautiful drawings and hearers with beautiful songs" (p. 16). The classical view of beauty is that it is objective, manifesting perfect form, proportion, and symmetry. "In such a worldview beauty becomes the very purpose of life, and aesthetics provides the basis for ethics" (p. 18). The masterpieces of classical antiquity were made in the service of idols and were themselves idols. This aestheticism dominates "when form is made absolute, when—like the media-bewitched teen starving herself before the mirror—we devote our lives to the pursuit of some created formal standard" and see that "the result is not beautiful at all, but wicked and ugly" (p. 18).

There are various critiques of this classicism apart from the biblical one. One of them is romanticism, which concerns itself not only with order and symmetry, but the sublime, "that which fills us with awe" (p. 19). A reaction of more recent decades has been postmodernism, in which any objective standard of beauty has been displaced by an utterly subjective conception of it. Thus, people have embraced the late nineteenth-century adage, "Beauty is in the eye of the beholder"—not as a worldview, "but as a truism" (p. 20).

The answer to the aestheticism of classicism and the skepticism of postmodernism is the Christian view of beauty. Beauty is "the forms through which we recognize the nature and ways of God" (p. 25). Over against postmodernism, Christianity would assert that beauty is objective (God is objectively lovely, even if all refuse to acknowledge it). Over against classicism, it would assert that beauty is "transcendentally objective" (p. 26). In chapter 2 (on enjoying art and music), four reasons are given, including that "artists and musicians expound general revelation in much the same way that preachers expound general revelation" and that "art and music help us avoid being desensitized" (pp. 37–45). Certainly Mozart and Schubert (to take just two examples) were magnificent expounders of general revelation. And one thinks of Lenin's determination not to listen to Brahms as it weakened his resolve to pursue the Communist revolution.

In chapter 3, dealing with the question of how we judge art and music, our authors chiefly focus on C. S. Lewis's An Experiment in Criticism (1961). His concern, of course, is literature, but the authors rightly note that what he says applies also to the rest of the humanities. The mark of true art (and thus of real beauty) is whether a work is something to be received (as opposed to "something merely to be used'). Chapters 4 and 5 deftly apply everything established in the first three chapters. It should be noted that in the section on art, questions involving the second commandment are acknowledged, but not treated (see the footnote on p. 56). In an era in which even Reformed Christians have embraced an aesthetical relativism akin to postmodernism (probably our chief problem), this volume reminds us that there are transcendental values without which art is truly impossible—standards that are always presupposed, though often denied, by all engaging in the pursuit of beauty.