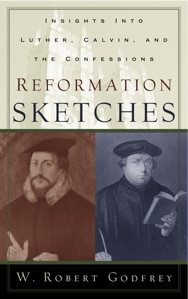 The substance of this material first appeared as a series of articles in The Outlook. It consists of seventeen brief chapters in which Dr. W. Robert Godfrey, the president of Westminster Theological Seminary in California, refreshes our memory of important men, important moments, and important truths of the Reformation.

As this suggests, most of what is discussed in these chapters is probably already known by many readers. But that by no means diminishes the value of this book. We ever need to have these "high points" reinforced, and these short essays do just that.

One chapter discusses someone whom Godfrey calls "the forgotten reformer." Can you guess whom he had in mind? I got it wrong, because I don't think of Philip Melanchthon as forgotten. But, if you read this chapter, you will understand and probably agree with that assessment.

Less well remembered than Melanchthon (by me at least) was Peter Martyr Vermigli. For that very reason, I found his story all the more interesting and all the more impressive. Some people never get the spotlight, but nevertheless stand behind, and greatly influence, those who do. Such a man was Vermigli.

I enjoyed reading these brief studies and heartily recommend them to you.