An Able and Faithful Ministry: Samuel Miller and the Pastoral Office 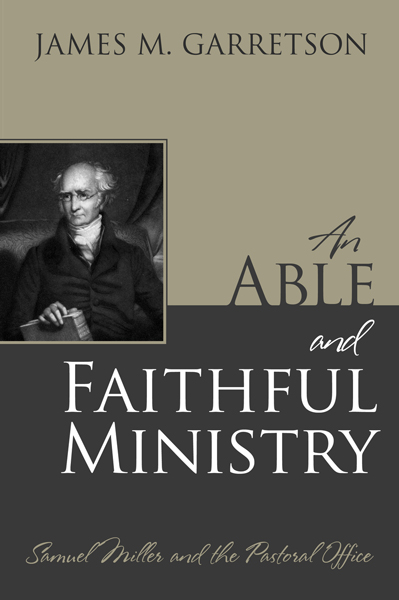 An Able and Faithful Ministry: Samuel Miller and the Pastoral Office

This book was an absolute joy to read, and I heartily recommend it to all. More specifically, I recommend that it be read by both ministers and nonministers of the OPC.

As for the first group, most OP ministers already have some interest in our ecclesiastical heritage, so they will probably not need much persuading. This volume is a well-researched, copiously referenced, and engagingly written narrative of the life and legacy of "one of our own."

Fellow ministers, do buy this book and spend some time sitting under Samuel Miller's ministry. It will do your head and heart immeasurable good!

As for the second group, I acknowledge that nonministerial members of the OPC may not immediately see the profit in reading a book on pastoral ministry. Though Part One does address matters of more universal interest (such as the founding of Princeton Seminary), Part Two is admittedly more narrow in its interest, exploring the duties of ministers.

This book can help you understand your minister better. It might even help you appreciate and enjoy him more. For it offers the reader a candid look into the typical minister's heart—there to see some of his secret joys and sorrows, his strengths and weaknesses, his hopes and fears, and, most importantly, the sole source of all his abilities and faithfulness: Jesus Christ.

Because ministers are real people with a really heavy calling, they need to be ministered to as they spend themselves for others. This book will equip you to do that more faithfully by helping you understand the heart of your minister.

To close, let me identify one potential complaint. Because Miller's convictions concerning the ministry may sound unrealistic, or at least exaggerated, to modern readers, some might accuse him of a certain kind of pietism or perfectionism. That, however, would be an inaccurate and anachronistic accusation.

Admittedly, I did feel something of a "historical disconnect" at times while reading this book, and I even wondered whether Miller's standards were attainable. However, having now spent a few months, as it were, as his student, the only thing I now wonder is this: how can we, as modern Presbyterians, rekindle the old fire that once burned so brightly in our church's bosom?