The Trinitarian Devotion of John Owen 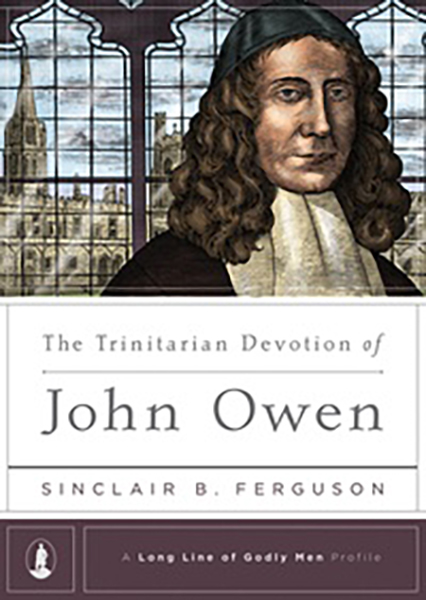 The Trinitarian Devotion of John Owen

I had always thought of John Owen as more theological than devotional, but Sinclair Ferguson makes it clear that Owen is both. The very words “Trinitarian Devotion” in the title of this book bring this out.

The bulk of Ferguson’s book deals with writings found in the first three volumes of his collected works, which are the most pertinent to the subject at hand. However, there are also quotes from, and references to, later volumes—and even his seven-volume exposition of Hebrews. All of this points to Ferguson’s comprehensive knowledge of the writings of Owen.

The author makes it clear that to John Owen, the believer’s knowledge of, and communion with, the Trinity is a fundamental part of his Christianity. It is hard to read this book without gaining a deeper hunger and thirst for more intellectual and practical knowledge of the glorious Godhead!

The book begins with a short biography of Owen, and then moves into the main subject. In this section, the first and last chapters deal with the entire Trinity. The three chapters in between deal with each person of the Trinity individually, based on the benediction of 2 Corinthians 13:14.

In the chapter on “Communion with the Father,” the author focuses on Owen’s emphasis on the Father’s love for the believer. This is a topic that believers can never spend too much time thinking about.

The chapter on the Son highlights the grace that is with us. The author brings out what he calls “one of the most important insights in all of [Owen’s] theology.” This is that “grace is, ultimately, personal. Grace is Jesus Christ; Jesus Christ is God’s grace.”

In the chapter on the Holy Spirit, the author reminds us that when Owen wrote his volume on the Holy Spirit, he was treading on ground that no one had really walked on before. Owen, like Calvin, is fit to be called “The Theologian of the Holy Spirit.” The gifts of the Spirit are often emphasized in our era, but Owen reminds us that it is better to concentrate on the person of the Spirit. Ferguson discusses the ten specific works of the Spirit in the life and work of Jesus, as identified by Owen. These are grouped according to the incarnation, ministry, death, and exaltation of Christ.

If you have never read John Owen, I would urge you to read this book, because it will whet your appetite to read more of this Puritan giant. And if you, like me, have read Owen, but have forgotten a lot of what you read, this book will make you desire to go back and read him again.