Riots, Revolutions, and the Scottish Covenanters: The Work of Alexander Henderson 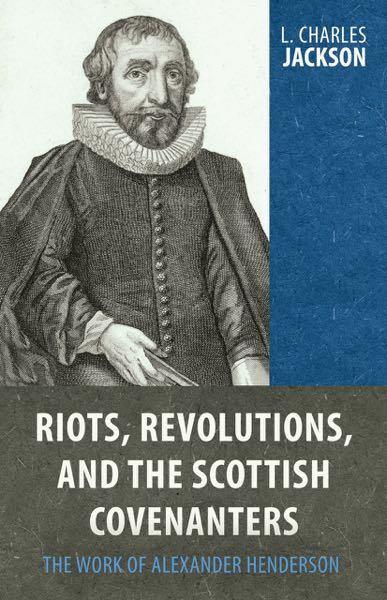 Riots, Revolutions, and the Scottish Covenanters: The Work of Alexander Henderson

Charles Jackson, in this version of his doctoral dissertation under John Coffey at Leicester, has given us a fine treatment of Alexander Henderson (1583–1646), perhaps best known to us as a member of the Scottish delegation at the Westminster Assembly. Henderson was the main mover in the 1638 National Covenant in Scotland and thus a fountainhead of the covenanting movement. The success that he enjoyed early on in that movement, in which he and his fellows stood against Arminianism, episcopacy, and Erastianism (in short, the Laudian impositions of Charles I) and for the idea that nations can now enter into covenant with God as did Israel of old, was not matched at the Westminster Assembly. Henderson has received scant treatment in recent years, with Jackson’s book being the first scholarly work on him since 1836.

Although the English agreed to a joint version of the civil covenant (the Solemn League and Covenant), the covenanting movement never got off the ground in England and subsequently failed to receive widespread support in Scotland (especially after the Restoration under Charles II in 1660). Henderson was dismayed that the dissenting brethren were able so long to derail the Westminster Assembly, as he saw it, over ecclesiological matters, when he believed that such had been solved in Scotland and on the Continent.

Jackson not only updates Henderson for us, using primary sources previously neglected or misread, but also advances the discussion about him on several important fronts. He considers Henderson as a covenanter, preacher, presbyter, and pamphleteer. For his theory of covenanting, Henderson looked back particularly to Knox in seeking to ground his resistance theory in the Bible (as opposed to Buchanan, who grounded his theory less directly in the Bible). Henderson achieved particularly notoriety as a preacher, and promoted covenanter views of church and state also as a churchman and pamphlet writer. Jackson shows how Henderson viewed his work broadly in an eschatological fashion, seeing Presbyterian polity as the culmination of Reformed theology.

While Jackson argues that the notion of the national covenant is not merely political but theological, this reviewer would like to have seen more theological engagement of that issue, so important for covenanters, specifically the warrant for a national covenant in the new covenant era, when God no longer deals with the nations in the same way that he did with Israel in the theocracy. That having been said, this is a careful history that refuses to decontextualize Henderson in order to serve current concerns, but insists that we take the proper measure of him in his own time and place.

Henderson died a rather disappointed man, not able to bring about the uniformity of faith and practice that he longed for. Jackson’s book serves as an encouragement to labor hard for the kingdom, but also as a cautionary tale: our hard work does not insure a particular outcome, and we must continue to praise God even when things occur in our ministry that look to us like failure.