Knox: The Life and Legacy of Scotland’s Controversial Reformer 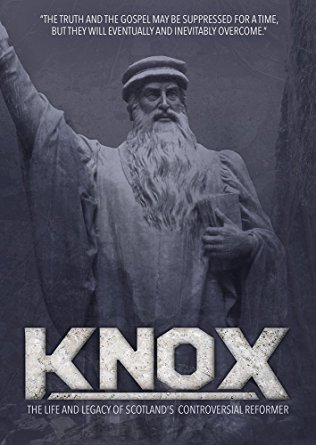 Knox: The Life and Legacy of Scotland’s Controversial Reformer

Knox: The Life and Legacy of Scotland’s Controversial Reformer, a 77-minute film on DVD produced by Murdo Macleod. Trinity Digital, 2015. Distributed in the U.S. by Gunn Productions (www.colingunn.com/knox), $17.95. Reviewed by OP members Nancy and Larry Mehne.

The way we think about life is profoundly influenced by our culture and history. As Christians, we are influenced not only by our contemporary world, but also by the history of the church. It is important for all believers to remember what the Lord has done through his providential care of the church. The film Knox is a worthwhile contribution toward the education of Presbyterians today.

The film is the story of John Knox (ca. 1515–1572), beginning with his birth at the time of early protests against corruption in the Roman Catholic Church. Scottish actor Philip Todd narrates the story as he visits the relevant historic sites in Scotland, England, Germany, and Switzerland. The story is carried along with commentary by leading professors, theologians, and historians, and is substantiated by quotations from Knox’s own sermons and other writings. But this is not a dry, biographical lecture by any means. Knox’s strengths and weaknesses are honestly discussed. Visits to historical sites and explanations by experts alternate with reenactments of events and animated segments, varying the flow of information. The fast-paced story keeps the viewer’s attention.

Also treated are Scottish social, political, and ecclesiastical life, the influence of the Reformation in England and on the continent, and the work of earlier and later Reformers. John Knox’s fervent stand for biblical truth on the theological issues within the church (preaching in the language of the people, participation of the people in the Lord’s Supper, singing of the Psalms, biblical literacy for all, shared leadership by elders and synods) is clearly presented. These subjects are still matters of concern today.

As Knox’s mighty work of God in Scotland was coming to an end and he was near death, his fervent appeal was: “Know God. Be faithful. Bless Scotland.” The film concludes with the same plea: that modern, secular Scotland will experience a new reformation.

Knox is a well-designed film—historically, theologically, aesthetically, and even evangelistically. It could be used as a tool to teach church history or ecclesiology or as an introduction to the means of grace. It could be used in the context of catechetical instruction or shown at Reformation Day events. It might even satisfy those who have always wanted to visit Scotland and Geneva! The film’s music, sound effects, and presentation were well produced. We have enjoyed this content-filled film multiple times. Viewing it with the English subtitles helped us to see names and places for further study. Knox is a gift to help us remember the Lord and our place in his providential work in history.