The Drama of Preaching: Participating with God in the History of Redemption 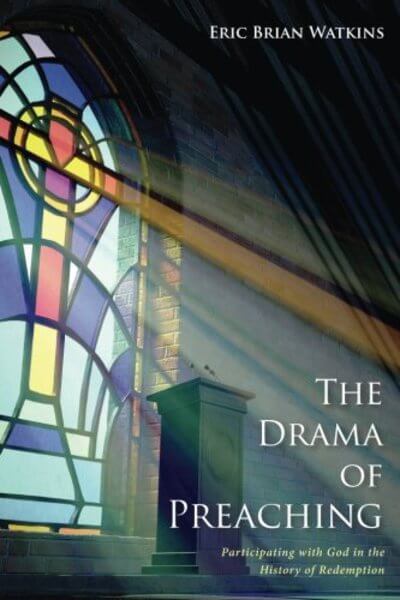 The Drama of Preaching: Participating with God in the History of Redemption

The Drama of Preaching: Participating with God in the History of Redemption, by Eric Brian Watkins. Wipf & Stock, 2017. Paperback, 274 pages, $26.40. Reviewed by OPC pastor Mark Winder.

In seven brief but substantial chapters, Eric Watkins provides a historical and exegetical basis for application through redemptive-historical preaching. After opening with an excellent, even gripping, overview of the historical discussion, he advances the work of Kevin Vanhoozer and others by wedding the drama-of-redemption model with that of redemptive-historical preaching. The drama of redemption is a metaphorical idea in which the sermon’s audience lives within the drama revealed in Scripture. The triune God is the author of the script as well as its primary actor, who calls people to be faithful participants “in the historically unfolding kingdom of God upon the world stage of God’s glory” (25).

The legitimacy of this paradigm is demonstrated in the book’s compelling exegetical and practical centerpiece: a treatment of the “Hall of Faith” of Hebrews 11. Each character points to Christ and anticipates his coming. The curtain having closed on their symbolic “stage,” they point toward the drama of redemption in which New Testament saints participate as they work out their salvation. Insofar as the Old Testament saints walked by faith in Christ, they provide a pattern for New Testament believers.

Chapter 5 discusses legitimate application, which must be “exegetically derived from the text for the purpose of instructing hearers in their proper response to the redemptive message indicated by the text” (115). Watkins provides a brief historical discussion of application, but focuses on an exegetical defense of his formulation, concluding that “union with Christ is the necessary, non-negotiable foundation of the New Testament idea of imitating Christ” (132).

The volume concludes on a practical note with a helpful discussion of postmodern culture’s historical context, followed by a demonstration of how the “drama of preaching” paradigm provides a platform for interaction. With a redemptive-historical emphasis, the drama-of-redemption paradigm draws the “postmodern hearer into the drama of Scripture, rather than letting her remain at a safe distance as a spectator of the text” (175). The Church’s responsibility is to live out her missionary calling and faithfully “perform her script in the ‘theater of God’s glory’” (185).

This rich, historical, exegetical, and practical resource constitutes an essential advancement in the discussion of redemptive-historical preaching and application.